Pundits have said the leaders of the next agricultural revolution – the digital revolution — will be big data-powered researchers, with a universe of information in hand to help make farming more efficient than ever.

But no one said those researchers would be found in the labs, fields, and classrooms of some of Canada’s main ag universities…that is, until now.

The competition is not for the faint of heart. Huge money is at stake — the kind that can take research to a higher level, the kind that leads to long-term economic advantages for Canada, and — in the words of Hon. Kirsty Duncan, Minister of Science—the kind of research that “will make the country stronger.”

It’s not just rhetoric. A total of 51 institutions submitted a letter saying they wanted to apply to the fund. Of these, 30 were invited to submit a full proposal. Nearly all did.

In the end, the baker’s dozen were chosen, with projects worth a whopping (some called it “staggering”) $900-plus million.

Duncan, who announced the winning projects last Tuesday, said the funding will equip Canada to respond to some of the most pressing issues it will face in the future – among them, the need for sustainable food and agriculture, an imperative not only here, but everywhere.

In fact, two of the 13 projects – each seven-year projects, and each worth approximately $77 million, at Guelph and Saskatoon — are aimed squarely at giving Canadian agriculture and food a leg up on the rest of the world.

One project, Food From Thought: Agricultural Systems for a Healthy Planet, from the University of Guelph, is the biggest single federal award the university has ever received…and that’s saying something, considering Guelph has been involved in ag research for more than a century. It’s built significantly on the broad expertise that has developed at the university as a result of the unique partnership with the Ontario Ministry of Agriculture, Food and Rural Affairs. In 2014-15, that partnership resulted in $54 million in support for a wide breadth of research, from farm to fork, at the U of G. 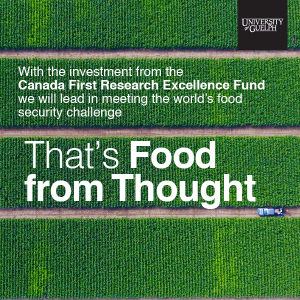 Food From Thought picks up on the partnership’s momentum. It’s all about sustainability, in ways that work for the entire agri-food value chain, starting with farmers. “By improving productivity while reducing inputs and environmental impact, we’ll be helping improve profitability for farmers,” says Evan Fraser, Food From Thought’s scientific lead.

The project’s goals are enhanced biodiversity, safe and nutritious food production, and improved animal welfare and human health. Big data will serve these goals by being the glue between them; in Fraser’s words, “by improving the understanding of the complex interplay between farming practices, the genetic potential of our crops and livestock, and the environment.”

The project will further benefit through its association with researchers at the Biodiversity Institute of Ontario, global pioneers in DNA barcoding to detect food fraud and identify invasive species. As well, IBM Canada is participating as a key industry partner, underlining the importance of big data in this project. Its role will include tools and training for data analytics, plus securing cloud-based storage for the huge amount of information gathered through super computing and from precision agriculture technology that has already started appearing on farms.

In Western Canada, the University of Saskatchewan will be ground zero for a worldwide network of water researchers using a big data approach in what’s called the Global Water Futures project. They’ll develop marketable tools to model and predict water scenarios, and to forecast soil moisture, streamflow, flooding and drought.

John Pomeroy, Canada Research Chair in Water Resources and Climate Change at the university, says new science being developing there will lead to commercial spinoffs involving field and aerial sensors, satellite imaging, robotics, and big data analytics. It will enable farmers to plan for crop development and improved efficiencies in water and nutrient management, while delivering improved productivity and environmental benefits, he says.

“Floods kill, but also destroy farms and farmland and disrupt agricultural production, while droughts threaten production and the viability of farms and communities,” he says. Fertilizer uptake by crops and runoff into lakes and streams are also big worries for producers.

It’s the second award the university has received from the national research excellence fund; the first, a $37.2 million award last year, launched the university’s Plant Phenotyping and Imaging Research Centre, for what it calls its Designing Crops for Global Food Security research program.

“By 2022, we hope to create a unique global resource for plant breeders seeking to develop new crop varieties at unprecedented speed and scale,” says Maurice Moloney, executive director of the university’s Global Institute for Food Security.

The University of Alberta received a huge award, too — $75 million — for a project entitled the Future Energy Systems Research Institute. The university acknowledges Canada’s hydrocarbon endowment has made energy a pillar of our economy, but environmental and societal imperatives compel us to develop new and sustainable approaches to producing, transporting and using energy.

And while it doesn’t scream agriculture and food as much as the projects in Guelph and Saskatoon, there’s little question agricultural bioproducts will somehow figure in.

The same goes for the University of Calgary’s Global Research Initiative in Sustainable Low Carbon Unconventional Resources, another $75 million project. It’s aimed at reducing the amount of energy and water used to decrease oil viscosity, through innovative, moderate-temperature, catalytic and biological routes. Certainly, the agriculture sector, with its interest in carbon emissions, could well be informed by some of the results from this research.

In their proposals to Ottawa, the researchers laid out their roadmaps. The research excellence fund now gives them the resources to follow through, helping secure Canada’s leadership role in agriculture and food’s next revolution.

Dirt Cheap Dairy is Not in Our Best Interest

Pushing Back Against the “Food Police”

Kaitlyn Kitzan: Promoting agriculture through Daughters of the Vote