A wet harvest has left farmers in many areas of Western Canada considering options for addressing soil compaction. One of the options that’s seen increased interest in recent years is the use of cover crops, specifically radishes, to break up root-restricting compacted soil.

As she explains in this Canola School episode, there are two steps in the process of alleviating compaction with cover crops: ‘biodrilling’ and decomposition.

One of the reasons there’s been strong interest in radishes is they’re known for their biodrilling ability — their roots are better than some other cover crops at pushing through root restricting layers, explains Lawley. 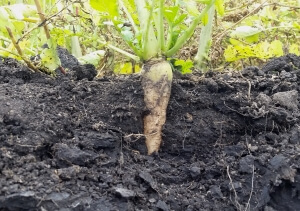 “We often think about this big radish root…but it’s not that part of the radish root that’s doing the really hard work of alleviating soil compaction,” she points out. “It’s the fine root hairs that are actually the mechanism or the means that plants use to alleviate soil compaction.”

And it’s when those roots decompose that they leave behind channels to help subsequent crops grow through the root-restricting layer and improve water infiltration from on the soil surface, explains Lawley, as long as those pathways aren’t disturbed by intensive tillage. A well-aggregated soil is also better at withstanding traffic on top of it, she notes.

As part of a soil compaction workshop co-hosted by the Manitoba Canola Growers in Portage, Man., Lawley discussed the targeted goals when using radishes to address compaction, what this means for tillage practices, considerations when planting another brassica into a canola rotation, and more:

Northstar Seeds to be acquired by Germany-based DSV

Northstar Seed Ltd., based at Neepawa, Manitoba, has signed a deal to be bought by Germany-based, Deutsche Saatveredelung AG (DSV). Founded in 1982 by a group of alfalfa seed producers, Northstar Seed specializes in the production, marketing, and distribution of forage, turf, cover crops and native grass seed, as well as leafcutter bees and equipment. DSV, a…