Harvest has ground to a halt in much of Western Canada due to rain and snow.

Other than the date, you could easily mistake today’s crop update from Saskatchewan’s Ministry of Agriculture with the report from last week, as the overall harvest progress number was left unchanged at 81 percent. (And that’s versus 80 percent complete two weeks ago.) 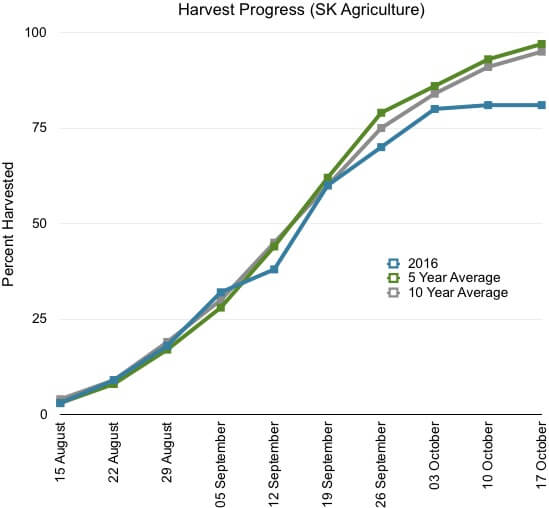 The Kindersley area on the west-central side of the province is the furthest behind, with an estimated 63 percent of the crop combined.

Commodity-wise, the province says 20 percent of the spring wheat crop is still in the field, while 22 percent of Saskatchewan’s canola crop is left: 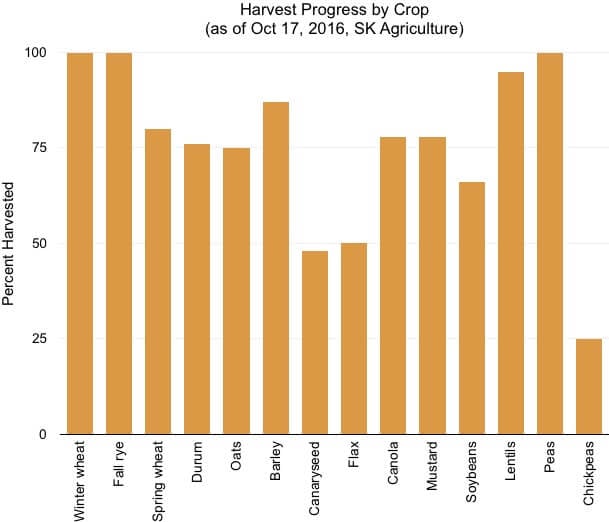 It’s a similar story in Alberta, where combines have been parked for several weeks in some central and northern areas due to snow and wet conditions. The most recent report from the province pegged harvest progress at 72 percent — well behind the five year average of 91 percent.

Most Manitoba farmers are in the home stretch with harvest, with the provincial ag department estimating 92 percent of the crop was off as of Monday, October 17.

To sum it all up, here’s the October 19th map from Agriculture and Agri-Food Canada’s Drought Watch service showing the percent of average precipitation over the last month (blue = more than 200 percent of normal):

Members of the U.S. and North American cattle industry are meeting at New Orleans, Louisiana, right now attending the National Cattlemen's Beef Association (NCBA) convention. RealAgriculture founder Shaun Haney is at the conference, and spoke with Colin Woodall, CEO of NCBA, about the priority topics at this year's meeting. Cost of production is of course…