Grains this week took a rollercoaster ride as volatility was the name of the game, between the U.S. election, the U.S.D.A.’s November W.A.S.D.E. report, and some better Harvest 2016 weather. Trading ranges maxed out this week as things see-sawed from Tuesday night through Friday morning. Soybeans ended up down 0.3% from last Friday, oats lost 1.4%, while corn and wheat took bit hits, down 2.3% and 2.7% in the past week. Canola was the only winner week-over-week, up 1.7% on a bullish palm oil report out of Malaysia and the Canadian Loonie surprisingly dropping a full percent in the past week.

Markets violently sold off on Tuesday night on the news that Donald Trump will be the next American President as the real estate tycoon’s campaign often flip-flopped on policies and promises. However, everything rebounded after Trump pledged in his victory speech “to be a President for all Americans” and “now it’s time to bind the wounds of division.” It’s important to note though that not only are the Republicans back in the Oval Office, but also won the battle to make laws in Congress, as they now control both the House and Senate.

One key thing to consider is the protectionist trade rhetoric that he campaigned on, which means N.A.F.T.A. is likely back on the table and while Canada would likely be open to re-negotiating a few things, it’s Mexico that Trump has put a lot of negative focus on (keep in mind that Canada and Mexico are America’s 2nd and 3rd largest markets for farm/ag exports). Overall, the new Donald Trump Presidency has more questions than answers at this point, and the markets are expected to stay a bit volatile until they can understand his perspective on a variety of issues. 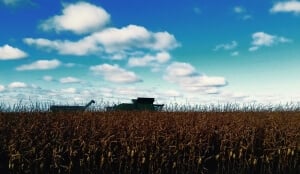 Following the surprising win by President-Elect Trump, we got the U.S.D.A.’s W.A.S.D.E. on Wednesday. In it, American corn yields were pegged at 175.3 bu/ac by the U.S.D.A. this month, down 0.1 from last month but 0.1 bu/ac higher than the average pre-report guesstimate. This translates to a 15.226 Billion-bushel crop, 185 million bushels more than what the market was expecting. The interesting thing on the demand front was that nothing was changed, despite exports soaring above where they were last year, paving the way for some analysts to start suggesting that we’ve seen the top of demand. One could argue though that the 2.225 billion bushels that the U.S.D.A. already has earmarked for exports is already a 17`% jump year-over-year.

All this equates to a 2016/17 carryout of 2.4 billion bushels of American corn, 83 million bushels higher than October’s number and a 38% climb from 2015/16’s ending stocks. Globally, worldwide production is seen at 1.03 Billion tonnes (+7.3% YoY) thanks to a bigger U.S. crop, Ukraine’s crop raised by 1.5 million tonnes to 45.6 million, and Brazilian and Argentinian crops making improvements over last year to 83.5 million and 36.5 million tonnes respectively (or 25% higher in Brazil versus 2015/16 and 26% better in Argentina).

In South America, we think the U.S.D.A.’s numbers are a bit optimistic with a 102 milion-tonne crop in Brazil (+5.4% versus last year) and 57 million tonnes in Argentina (basically unchanged from last year), especially considering the acreage numbers being less than expected. That being said, in Brazil, farmers are flying through fields, as soybean acres planted are well ahead of last year, and even complete in a few areas. This suggests that we could see more soybeans coming to market from South America than they normally do. Next door, the Argentinian soybean planting pace is a bit behind schedule thus far, but there’s lots of time to catch up to the 40% usually planted by the end of November.

That in mind, the U.S.D.A. attaché in Argentina is expecting soybean production there this year to hit 55 million tonnes, a 3% drop year-over-year and the 2nd consecutive annual decline as acreage is expected to decline 3.7% year-over-year to 48.2 million. While the official U.S.D.A. forecast didn’t change month-over-moth, what’s definitive is that Argentina and Brazil continue to be bigger players on the global stage and it doesn’t look like they intend to slow down.

For wheat, not much was changed to the supply and demand tables in the W.A.S.D.E., including Canadian and Australian production remaining at 31.5 million and 28.3 million tonnes respectively, despite the obvious harvest challenges. Much like corn and soybeans, there was no additional demand to be seen and so wheat followed the bearish corn report lower as, no more feed demand is seen switching over to the cereal. I wouldn’t be surprised though if we see some changes to the production numbers of a few countries by the January W.A.S.D.E. report.

While the spring wheat cash price has been relatively unchanged lately, durum prices have continued to edge up a bit with spreads between #1 and #3 and #4 quality widening. We continue to see some good selling opportunities as the highs of the nightmares that was 2014 durum market was seen in late November / early December. However, one thing to put into perspective was the difference in carryout in 2014 and the size of new supplies that came off this year, not just in Western Canada, but around the world.

Canola saw some pressure earlier in the week but between the lower Loonie and palm oil production in Malaysia in October only coming in at 1.6 million tonnes (down 17.6% decline year-over-year) the oilseed rebounded to end the week. Pulse markets remain elevated from the harvest lows seen a month ago, but overseas peas price indications suggest that there doesn’t seem to much more strength for yellow, but a little bit for greens. Further, the W.A.S.D.E. showed us that the American peas crop this year was 1.23 million tonnes (+38% year-over-year) while lentils production was up 136% from 2015 to 564,000 tonnes.

Coming back to the U.S. election, Goldman Sachs believes a Trump presidency will generously support investment in U.S. infrastructure (about $1 trillion has been suggested) meaning metals and oils are likely to get a boost. There is some concern that Trump’s protectionist ideals could be tariff wars, but I think it’s too early to make that call. Net-net, given Donald Trump’s public history of leadership style, it’s very unlikely that we’ve seen the last of the surprises involving him, or the market dropping and climbing back up as a result.