Following what they deemed a successful two-day field trial earlier this month, officials from Ontario’s Cellulosic Sugar Producers Co-operative are approaching their future with confidence.

They’re actively recruiting members, raising $11 million in funds to buy equity into a processing plant in Sarnia for high-quality liquid dextrose, and to acquire the equipment necessary to harvest and transport all biomass.

They are determined to be fully subscribed with 55,000 acres of corn stover and wheat straw by the middle of 2017.

“Mature, established markets already exist for high-quality liquid dextrose in the industrial and food additive sectors,” says Jay Cunningham, business development manager for the Co-Op. “The existing value is there, and so the economics of it all make sense to producers.” 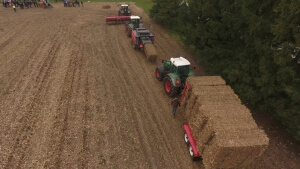 The Co-Op describes itself as an Ontario farmer-owned co-operative that strives to develop new markets for crop residue materials, and new business opportunities.

Currently, there’s no market in Canada for this residue. But by extracting cellulosic sugar (high quality dextrose) from it, the co-op says farmers can reach new markets without having to compete for land, or bring more land into production.

To join the co-op, corn and wheat farmers pay a one-time fee of $200 per acre, which also buys them ownership in the processing plant.

Members agree to contract a minimum of 100 acres to the co-op — ideally, about two-thirds corn stover, and one-third wheat straw. The co-op takes responsibility for harvesting the stover or straw, using its own equipment. All biomass processed in the Sarnia plant will come from co-op members; the 55,000 acres it wants to contract is less than 10 per cent of the acreage in a 100-kilometre radius of Sarnia.

The co-op will pay $25/tonne for corn stover and $40/tonne for wheat straw (adjusted to 15.5 per cent moisture). Farmers are expected to receive about $62/acre — a combination of the sale of biomass and return from the production facility — and start realizing a return on investment in year four of their participation.

The co-op’s field demonstrations on two farms near Forest and Bothwell were designed to give producers a first-hand look at the equipment that co-op operators will use to harvest corn stover and wheat straw, and see what a field looked like after a Hiniker flail chopper, AGCO large square baler and a ProAg bale stacker had been through it and harvested approximately 30 per cent of the available residue. 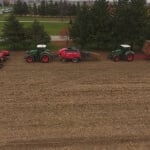 Jim Campbell, secretary for the co-op and manager of the AGRIS co-op (a partner in the venture), says small-scale demonstrations have been conducted at the Outdoor Farm Show and elsewhere for four years. The most that’s been harvested on those sites was about 20-30 bales. But in the Bothwell and Forest fields, despite challenging weather they harvested almost 150 bales.

“We needed a large scale demonstration so we could see what our equipment could do, give producers an idea of what to expect and see what a field looks like when we’re done,” says Campbell.

Town hall meetings will be held in December to further discuss the program with producers. Cunningham will be coordinating the meetings. Producers can contact him at [email protected], 519-784-2084 or check the Cellulosic Sugar Producers Co-Operative website at www.cspcoop.com.

Corn School: The 7 Wonders of a Great Corn Crop

While each and every wonder of the corn plant reaching maximum yields hinges on the weather, there are several other factors that have a measurable impact on yield. At the recent FarmSmart conference at Guelph, Ont., Bernard Tobin spoke with Dr. Fred Below, from the Universtiy of Illinois, to discuss the seven wonders of 300…