Two weeks after meeting with farm and grain industry groups in Saskatoon, federal Transport Minister Marc Garneau shared his government’s vision for the future of transportation in Canada in a speech to the Montreal Chamber of Commerce on Thursday.

After describing the environmental, safety and consumer-related aspects of the Liberals’ “Transportation 2030” plan, Garneau said the government will introduce legislation in the spring of 2017 to address several of the priority issues for grain transportation.

He specifically said the government will:

“We will continue to work with stakeholders to ensure there’s a proper balance in place – one that supports rail customers and delivers continued investments in the system,” said Garneau. “That’s how we will create a freight rail system that is even more competitive and efficient in the long term.”

Agriculture Minister Lawrence MacAulay, who’s in China on a trade mission, spoke with the Grains Roundtable via conference call: “These measures will help bring more clarity and accountability to the supply chain and help shippers by giving greater incentives for railways to deliver predictable and reliable service,” said MacAulay.

Farm and grain sector groups are welcoming the commitment.

“We are extremely pleased to see the government state its intention to introduce legislation that will facilitate reciprocal penalties in Service Level Agreements,” said Kevin Auch, chair of the Alberta Wheat Commission. “Shippers need the ability to negotiate penalties and contract terms equal to those being charged by the railways in order to create a more competitive marketplace.”

“While the most important part of the announcement is the increase in railway accountability, all of these provisions are important,” noted Cam Dahl, president of Cereals Canada. “Improving CTA processes is important to ensure problems are caught and addressed before they snowball into major failures. Together with clarification to the meaning of adequate and and suitable railway service this will help ensure that the Canadian transportation system meets the expectations of our customers – both within Canada and internationally.”

“Canadians and Canadian businesses are frustrated at Minister Garneau and his government’s propensity to put off making a decision,” said Transport Critic Kelly Block. “When they finally do make an announcement, it inevitably increases the cost of living or doing business in Canada.

“The Minister simply restated concerns that were identified in the Canada Transportation Review, led by David Emerson, and asked Canadians to stay tuned. This isn’t leadership on Canadian transportation,” she continued. 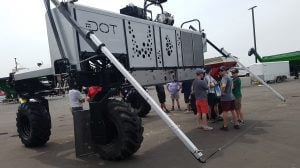 The Beaujot family and SeedMaster company have sold their remaining shares of Dot Technology Corp to Raven Industries Ltd. “The original sale of a majority interest in Dot to Raven that took place in November 2019, put Dot on a new path,” says Dot founder Norbert Beaujot. “This new path added Raven expertise in controls…Read more »