Grain prices entered November still above where they’ve been the past couple of months but pulled back from their October highs due to some weather premiums getting erased, farmer sales, and profit-taking on the futures board. Ultimately, with harvest starting back up in many places, bullish attitudes have softened and those who have been rolling the dice the past few weeks hoping for better prices, are now wishing the numbers from the past 2 weeks would come back.

From a performance perspective, oats continued its rise this week, up 2.4% on the futures board and about 10-20 cents CAD / bushel for cash prices in most places around Western Canada. Wheat was able find some legs to start the week but some poor U.S. export numbers on Thursday kept those gains in check, ending the week up 1.2%. However, that was the extent of the gains as corn felt a 2% pullback while canola fell 1%, following soybean oil’s 2% loss, soybeans 2.1% decline week-over-week, and WTI crude oil pulling back 9.4% since last Friday.

On that note, the weather is looking deluxe for Western Canada to see some more harvest progression this weekend. Further down the line, AccuWeather’s forecast for this winter is for above-average temperatures and below-average snowfall in the Canadian Prairies, whereas Eastern Canada will see more snow and colder temperatures. This forecast may help the railroad companies as a new strategy by the Canadian government released yesterday highlighted “reciprocal penalties between shippers and the railways in service level agreements.” Most producer organizations agree that this Is a good thing, but when it comes to transportation, I like to see some hard data before making my own conclusions.

Staying in the Great White North, pulse crop prices have seen some strong moves to the upside, especially for green lentils and chickpeas. Durum wheat prices are also starting to see their march higher but we’ve had expectations for the past 6 weeks or so that the highs of the marketing year will be in before Christmas time (so manage price risk accordingly). The U.S.D.A.’s attaché in Toronto downgraded Canadian wheat exports by 1 million tonnes to 21 million, a 4-year low, thanks to quality issues.. Further, they also pegged the total Canadian wheat crop at just 29.2 million tonnes (a 3-year high), versus the official U.S.D.A. forecast of 31.5 million (perhaps we see an update in the U.S.D.A.’s W.A.S.DE. report on Wednesday, November 9th?). 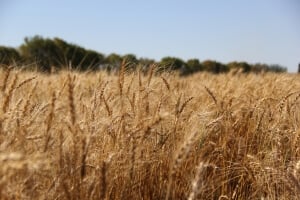 One factor Canadian wheat affecting not all Western Canadian wheat growers is the quality of the American spring wheat crop. Per the North Dakota Wheat Commission’s annual quality report, the U.S. hard red spring wheat crop was one of the best, which puts pressure on Canadian product to get shipped not only across the 49th parallel, but also from a competitive standpoint at the port.
Much like the 2015 crop, much of it averaged at US #1 grade (92% to be exact), with average weights of 61.6 lbs per bushels, including 81% coming in above 60 lbs. The average HVK levels were 77% (above the 5-year average) with more than 2/3s of the crop coming in above 75% HVK. Average protein for the American HRS wheat crop was 14.2% (based off 12% moisture), a strong divergence from the U.S. winter wheat crops’ average protein of 11.2%. Apart from quality being relatively high, disease issues are not a significant issue in the U.S. wheat crop, whereas vomitoxin and fusarium continue to looked for by all wheat buyers (on FarmLead.com or otherwise).

With the livestock market the only true market product with high disease numbers can get blended into, recent historical analysis by Reuters this week points out that the spread between corn and Chicago soft red winter wheat prices are the lowest they’ve been in the last couple of years. This continues to suggest that more wheat should be going into the livestock rations. However, the problem is that the swelling of U.S. corn inventories makes it more difficult for wheat to compete (that’s what happens when you produce 3 monster crops back-to-back-to-back America!).

Globally, the U.S.D.A. does expect feed demand for wheat to increase 6% this year, but in the U.S., it seems that corn continues to win out. Using history as an indicator though, Reuters suggests that corn and feed wheat prices will likely converge (either corn must see its price go higher or wheat must come down) and ther expectation is in the second half of the marketing year, feed wheat demand (and prices will increase). However, with crop conditions in South America relatively benign (although there is some wet weather in Argentina) and La Nina unlikely to prove much of a threat, today I’m not so convinced that it’s feed wheat prices that must move.

We’ll get more substantiated numbers on Wednesday from the U.S.D.A. but FC Stone increased its average corn and soybean yields to 175.3 bu/ac and 52.8 bu/ac respectively. On the flipside, discussions are already starting for Plant 2017 with Informa calling for corn acres to pull back from this year’s 94.5 million to 91 million in 2017. Further, Informa expects American soybean area to climb to a record 88.5 million acres from the 83.7 million planted in this past growing season. Fertilizer company CF Industries is expecting corn acres in 2017 to fall back to 88 million, matching the number in 2015, but the 6.5 million-acre-drop year-over-year would be the largest 1 year reduction in the past 9 years.

Nonetheless, some in depth analysis from the University of Illinois suggests that American corn ending stocks will stay above 2 billion bushels for both 2016/17 and 2017/18. This is because, even though planted U.S. corn acres are likely to decrease next year, global competition and the huge crop this year are making it tough to work through the gluttony of grain. That being said, increased demand of U.S. corn is already up this year as corn for ethanol is projected by the U.S.D.A. to increase by 1.3% year-over-year (YoY) while exports are expected to grow a healthy 17% YoY at an impressive 2.23 Billion bushels. Feed and residual use of corn is expected to grow by 9% YoY, but anything much greater than that will be pressured by lower livestock prices and competition with other feedstuffs (i.e. wheat…there’s a lot of it).

In China, according to a domestic survey by SGS, China’s corn production this year will fall 7.3% year-over-year to 208.1 million tonnes, the lowest since 2000 (the asterisk here though is that China’s corn stocks are double what they were just 5 years ago). After moving away from minimum price supports for corn, Beijing is trying to stimulate corn demand by subsidizing corn processors. However, as the People’s Republic try to get more soybeans harvested, corn and rice in certain parts of the country are still more profitable. Nonethless, soybean demand continues to be strong (according to Bunge, Chinese crush margins are the best in world right now) so the market could help flip acres over to beans, before the Chinese government waves a policy wand and pays more to soybean grower.

In Argentina, rains in some parts of the country have slowed field activity, meaning total soybean area planted is at 13% thus far, behind the average pace of 23%. It’s also been estimated that as much as 500,000 Argentinian corn acres have been flooded out, meaning the expected corn acreage increase year-over-year of 27% to 12.1 million acres likely won’t be realized. Next door in Brazil, soybean planting pace continues to race ahead of the usual average, and while I think this is good, Dr. Cordonnier of Soybean & Corn Digest “fears that farmers in Mato Grosso are actually planting too fast, as it will compress a large portion on the harvest into the month of January”, one of the wetter months of the year. Conversely, with more of the soybean crop maturing faster and around the same time, the faster the 2nd crop safrinha corn acres can be planted.

Overall though, crop conditions in South America remain relatively benign and with U.S. soybean harvest rolling at full tilt, the bearish fundamentals are causing U.S. basis levels to widen. We’ve started to see a bit of a similar dynamics in the canola market but the Canadian oilseed is also getting pressured by palm oil prices in Malaysia falling as palm oil inventories in the country were expected to climb almost 9% month-over-month in October to 1.68 million tonnes (the biggest improvement in more than a year).

In my opinion, the market is either assuming the crop will get taken off eventually or it’s already accounting for worst-case scenarios (otherwise, we’d be much higher). If the former is true, then we likely we push higher in the next 3-4 weeks (albeit slowly) but that’s pure speculation at this point, especially for canola. I think a lot of it will depend on the next 2 weeks of harvest activity – how many farmers with crop left out will roll the dice and get out there to take off tough grain in? Are you?

Running any business is a challenge, but running a family business and managing different personality styles carries with it a special kind of obstacle, as team mates love each other but also need to like each other. Greg Lingelbach is the chair of TEC Canada, a business coaching and peer mentorship organization. He presented at…