Grains markets cruised through the middle of December slightly lower to unchanged as export and domestic demand numbers tried to offset some changing monetary policy from the U.S. Federal Reserve. The U.S. Dollar climbed 1.3% for the week, making U.S.-based grains more expensive relative other origins. Oats was the only thing that made the green aisle, up 0.1%, while everything else was slightly lower, with canola down 0.05%, soybeans down 0.1%, corn dropping 0.65% since last week, and wheat losing 1.25% week-over-week, erasing some gains made earlier in the week. Heading into the last 2 weeks of the calendar year, weather in Argentina continues to be watched but currencies are becoming an important item again right now, much like it was at this time last year.

The reason behind this is that this is when we predominantly see U.S. grain export sales start to slow as international buyers start to switch to other origins. Case in point, soybean export prices across the world in U.S. Dollars stand at about $398 / MT at Brazilian ports, $387 in Argentina’s export positions, and $396 / MT coming out of the U.S. This intuitively begs the question, how easy is it for international grain buyers to switch origins? Pretty easy, especially with the U.S. Dollar climbing.

Why is it remaining so strong? Well, this week the U.S. Federal Reserve raised their key benchmark rate by 0.25% or 25 basis points to 0.75%, which is technically just their 2nd increase in the past decade! Chairwoman Janet Yellen cited strength in the U.S. economy signs that inflation is increasing as the justification for the hike. The Fed said that they would likely raise interest rates another 3 times in 2017 but that President-Elect Donald Trump slashing taxes and increasing spending could force them to act sooner than planned to tackle inflation and therein, rising prices.

What’s good for the U.S. economy tends to be good for Canada but with average Canadian household debt-to-income standing now at a record 167%, any following by the Bank of Canada to increase interest rates here in the Great White North could put a lot of pressure on people. However, a lower Loonie does support Canadian grain exports, especially since total exports are tracking about 3.6% behind where they were a year ago, including canola exports down 7.6% compared to last year and wheat exports trailing 18.7% behind 2015/16’s pace by this point of the year.

Soybean planting in Argentina remains behind schedule, with about 2/3s of the crop now planted, just 2 weeks before January 1st, when, on average, 95% of the crop is planted. Rain is in the forecast for most of the country over that timeframe, whereas things are expected to get a little drier in Brazil. However, conditions remain relatively positive in Brazil and soybeans production estimates are ranging from 102 to 106 million tonnes.

Ultimately though, in terms of fundamentals, the soybean complex is looking very similar to last year, yet prices are above $10 / bushel on the Chicago board and the market is very long, a contrast to the $9 handles and the net short position a year ago. With prices up nearly 20% versus this time in 2015, yet carryout is relatively unchanged thanks to supply and demand growing relatively at the same pace (a slight edge to production though) it doesn’t seem logical. Further adding bearish pressures are is the record American crop and the likely monster coming off on the other side of the equator between Argentina and Brazil.

Looking even further, Informa raised their 2017 soybean acreage number to 88.9 million (still a record), while dropping their corn and wheat area forecast to 90.15 million and 33.2 million acres respectively. With the trend clearly favouring soybeans the last few years, one has to wonder if soybean acres will become #1 in America before 2020 (I think they can). What we know today is that most U.S. acres are decided between November and January, with most changes thereafter being marginal. As such, you might see 1 million or so acres swing back to corn but with the coarse grain still under $4/bushel, a lot of bean acres are getting bought today (and they should probably be getting priced too).

Across the pond, French winter wheat area are expected to remain above their 5-year average, with 18.1 million acres getting seeded, including 12.8 million acres of soft wheat (highest since 1993 but just slightly above last year’s acreage) and 894,500 acres of durum (the first drop in the past 3 years, but only down by 19,770 acres from last year). While the lack of change to wheat acres is a bit surprising after this past year’s poor harvest, French farmers are decreasing their barley acres for the first time in 5 years to 3.41 million and rapeseed area by 5.1% from last year to 3.58 million acres. 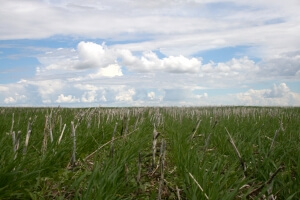 Like France, Russian winter wheat acres are not dropping this year. This follows the 2016 harvest which produced roughly 115 million tonnes of grain. However, the Russian government thinks that they can hit 130 million tonnes in the next 15 years. Considering that in the last 15 years, Russian grain export capacity has exploded from just 5 million tonnes to 45 million, and in the past decade, production is by about 1/3 or more than 30 million tonnes, it’s not like they haven’t surprised us lately. What we do know is that there are millions of unseeded acres around Russia that could make it happen (albeit I do agree that the timeline is a little aggressive).

On that note, despite record global wheat production and carryout and even more winter wheat acres were planted in Russia this year, more analysts are getting optimistic that wheat prices can continue to improve as acres elsewhere, namely the U.S. and Ukraine, fall. However, we still must work through this gluttony of wheat that’s out there and even though many are kicking the proverbial sales can down the road, said supply will compound the resistance that any rallies must push through.

This sentiment in mind, insurance giant MetLife says that grain prices in 2017 will reach a turning point: either we’ll see a crop failure somewhere and prices can start to rebound or we’ll have trendline yields again and prices remain subdued (they favour the former to happen, citing bullish acreage numbers). On that note, U.S. corn farmers are staying stubborn and unwilling to sell at current prices, but we have seen basis levels improve lately, a trend that could continue as the market tries to price out some grain to get it out of bins and ground piles.

This is especially important for North Dakota farmers, who produced a record 500 million bushels of corn this year, an increase of more than 50% from the 328 million bushels produced last year. In the past, about 40% of production has gone to ethanol but that would only represent about 25% of this year’s monster crop, while local feed demand will only account for about 1-2% of corn production this year. North Dakota isn’t the only state facing this problem as the likes of South Dakota and Michigan are in similar boats with larger-than-expected crops.

All these mountains of grain (literally, there’s piles everywhere) can either move inland into other spots for ethanol processing and feed-use, or they can potentially get shipped across the border for Canadian options. Even with the currency exchange, with U.S. corn basis in this states giving U.S. farmers a corn price that starts with a $2 USD / bushel on it there are more valuable options to ship across the border, which will continue to keep feed prices depressed. We’ve been seeing some decent corn movement on FarmLead and some good values remain in Saskatchewan, Manitoba, & Ontario to start a negotiation on.

Overall, the stronger U.S. Dollar should keep pressure on the Canadian Loonie, meaning the Great White North potentially becomes a better sourcing option. While oilseed futures prices pulled back this week and are down about 2-3% compared to a month ago, the recent oil price spike has been supportive of the complex, especially with the biofuels mandate being raised a few weeks ago. Why? This intuitively takes more supply away from the food market, which is why higher oil prices are also supporting higher vegetable oil prices. The only problem is that we’ve started to see a wider basis for canola as we start up our winter holiday traditions, which will only be compounded with a Canadian Dollar hanging around 75 cents USD.