Grain markets see-sawed this week on multiple crop production reports, the likelihood of La Nina being played down, and speculators moving in and out of positions like a 3-year old at church. Oats was the winner again for the week, up 5.35%, followed by corn at 3.3%. Wheat and soybeans also fared well, up 2.15% and 1.1% respectively, but canola fell back 1.85% on some large production numbers and the Canadian Loonie creeping back towards 76 cents USD, gaining nearly a full percent from last Friday. Overall, the sideways trading regime we’ve seen the last few weeks continue with no real direction, much like the cold and snowy weather that’s hit us recently!

The report that had the most fanfare coming into this week was the USDA’s WASDE report on Friday, December 9th but the report came and went without much changes (maybe the cold affected USDA analysts too?). U.S. corn, wheat, and soybean production, demand, and carryout literally did not move, with 2016/17 ending stocks staying the same as November’s report at 2.403 billion, 1.143 billion, and 480 million bushels respectively.

Despite the aforementioned drier weather in Argentina, Brazilian conditions are looking pretty deluxe and exporters are ready to receive what looks like will be a big crop. This is because, with a smaller 2nd crop crop due to the dry conditions, less grain has been shipped out of Brazil in the 3rd and 4th quarters of the calendar year. This in mind, the waiting time at the #1 exporting port of Santos has dropped to 9 days (it was 20 this time a year ago), while the Paranagua port in the south is just 6 days, versus 56 last November! (continues below)

Brennan Turner joined Kelvin Heppner on Real Ag Radio on Thursday to discuss the StatsCan and ABARES numbers, and look ahead to Friday’s USDA report:

With this in mind and the crop developing ahead of schedule, Brazil soybeans could hit the world market faster than usual and China is ready to take them! The People’s Republic imported a record 7.84 million tonnes of the oilseed in November (+51% from October, +6% year-over-year). Without China buying a few more U.S. soybeans before the Brazilian onslaught, America’s forecasted exports of 55.8 million tonnes may not be reached (they’ve shipped 26.1 million as of December 1st), especially considering that Brazil is expected to ship out as many as 60 million tonnes.

The more relevant report for our Canadian readers was the Statistics Canada crop production report on Tuesday which showed a decently-sized crop, despite obviously challenging harvest weather this fall. Canadian barley production was pegged at 8.78 million tonnes (+7% from last year, +6% from the 5-year average), oats output is down a bit to 3.15 million tonnes (-8%, -3.5%), while triticale and rye production soared in 2016 to 53,900 and 408,600 MT each (+117% and 81% higher year-over-year, respectively). 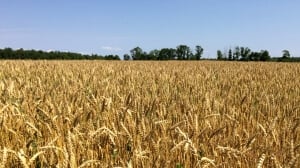 On that note, this week the Indian government has removed its 10% wheat import duty after domestic prices were at record highs in November. As such, it’s been suggested that as much as 5 million tonnes could be imported this year by the 2nd-most populous country and today we already know that private importers have bought about 2 million tonnes of Australian and Ukrainian wheat. The bigger problem though is that a lot of is set to arrive at the same time in the next few weeks, thanks to delays of ships loading in Ukraine as it’s the height of corn export season there, so that’s take priority.

On the other side of the world, Brazil is likely not going to need to import as much wheat this year thanks to a bumper crop of nearly 6.7 million tonnes (+21% year-over-year) with a lot of the crop seeing good milling qualities (i.e. falling number and gluten strength). With Brazil’s wheat imports of 5.1 million tonnes at the lowest they’ve been in the last 20 years or so, this doesn’t bode well for other wheat exporters as now Argentina has more of its wheat to move elsewhere.

While we know that the Black Sea countries have been very aggressive in their sales this year, there’s rumours floating around that with Venezuela’s inflation issues (they’re now weighing money, instead of just counting it), Russia has cut a deal to start exporting wheat there early in 2017. Why does this matter? Venezuela usually imports about 120,000 MT of wheat from Canada and the U.S. each month.

With competition in the wheat market rife, both Commerzbank and the United Nations’ FAO suggest that wheat prices aren’t likely to recover in 2017 as, while demand has been stable, plentiful supplies and similar production expectations will keep rallies in check. Overall, we’re know heading into a time of the year where prices can often experience a “Santa Claus” rally, but given the large supplies of grain out there compared to years past, expectations of how far a speculation- or weather-driven rally can hit prices up shouldn’t be too high.