Grains pulled back from last week’s highs as profits got locked in to end November and the trade got really choppy. The news that OPEC would cut production by 1.2 million barrels for six months couldn’t help oilseeds recover from its highs made last week, but canola did track soy oil, as each were up 0.35% and 2.15% respectively since last Friday.

The Canadian Dollar also climbed 1.7% for the week, thanks to the OPEC announcement, in addition to new pipeline announcements from the Canadian government and Donald Trump continuing to suggest he’ll build the Keystone XL pipeline. Taking into consideration South American growing conditions and strong farm selling of last week’s highs, oats, soybeans, corn, and wheat were all down week-over-week by 0.45%, 1.65%, 3.15%, and 3.65% respectively. 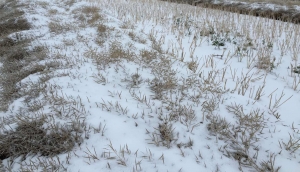 Creating the likelihood of more volatility next week are a couple of reports. First, the Statistics Canada production report on Tuesday, December 6th, followed by the December WASDE from the USDA on Friday.

From StatsCan, the average guesstimate from analysts is that Canada produced 30.7 million tonnes for the 2015/16 crop (largest in three years) while somehow producing a record 18.8 million tonnes of canola, despite more than a few fields still unharvested. Canadian canola crush remains strong at 15% ahead of last year’s pace with 3.05 million tonnes used thus far, so if the market is already pricing in this big of a number, then we could likely see new multi-year highs if StatsCan actually says less than 18 million tonnes.

As for the WASDE report next Friday, with harvest basically done, most analysts aren’t watching production, they’re watching for action in demand. U.S. corn export sales this marketing year are up 76% versus a years ago (12.5 million tonnes versus 6.8 million in 2015/16 by now) while soybean exports are also tracking ahead, up 27% year-over-year, at 24 million tonnes versus 20.2 million. Finally, U.S. wheat commitments are up 31% compared to a year-are ago. We’ll also be watching for South American production estimates, but while record yields in America are still expected, demand now will guide the market.

On that note, vegetable oil demand is expected to remain strong as we head into the 2017 calendar year, growing about 3% year-over-year. Behind the growth is sustained demand from India and lower Chinese stocks (although the government there is importing AND encouraging more domestic production of soybean oil). Vegetable oil prices are likely to be supported through the 1st half of 2017, before pulling back later on as increased production is expected from Malaysian and other Southeast Asian producers as they recover from 2015/16’s El Nino.

Adding in some pressure to the vegetable oil markets though is Argentina as the government there is encouraging investment there, at a time when record crops are already stressing the current infrastructure. On that note, it’s estimated that about 50% of the Argentinian soybean crop has been planted thus far (58% by this time last year) while 25% of the wheat crop there has been taken off (versus 31% last year). Estimates of the size of the Argentine wheat crop range from 12.5 – 14 million tonnes and with quality decent, it’s already finding ways into places like Algeria and Asia.

That being said, to date, currency effects have allowed for Black Sea wheat to fill Asian market needs in the past, but freight advantages are now making Argentinian- and Australian-origin wheat more competitive. This is especially significant for Aussie wheat as yields AND protein are coming off above expectations in Eastern Australia. While we mentioned last week that the I.G.C. remains the bears with a 28.3 million-tonne Aussie wheat crop forecast, grain trader Nidera says that it looks like a record of at least 31 million tonnes, and as high as 33 million (previous record was 29.9 million tonnes set five years ago).

With heavier competition from the Southern Hemisphere harvest, Russia’s wheat exports are likely to come up short of original expectations. Ironically, domestic wheat prices in Russia have risen for eight straight weeks, it’s longest bull-run in four years since October 2012, now sitting at a $184 USD/MT ($6.65/bushel) out of a Russian port position for 12.5% protein quality. Also, Russia is currently dealing with African swine fever in Krasnodar, its top wheat-producing region, which could delay exports further as the government seeks to stop the spread of the disease by quarantining movement of animals and grain from the area.

Moving further west, Strategie Grains continues to reiterate its call that European Union wheat acres are unlikely to decline in 2017/18 and with the weather unknown at this point, they’re projecting a bigger crop than this year’s rain-riddled downturn. With a soft wheat production forecast of 152.9 million tonnes, this would represent at 5.5% increase from this year’s 145 million-tonne (which was technically a 9% drop from 2015’s record 159.4 million tonnes…key word here being record).

As such, Strategie is expecting that next year, with the rebound in production, the EU will recover the exports it lost to the Black Sea this year. However, it should be noted that on-farm storage in the Black Sea are increasing, disrupting usual harvest pressures of sales-off-the-field. Conversely, Strategie is expecting durum wheat acres to drop as a result of lower margins but rapeseed margins will continue to be good but not good enough to offset the production risk without seed treatment capabilities.

On the wheat demand front, we saw Algeria tender for another 120,000 MT of durum yesterday (most of it came from Canada) at a delivered price of $310 – $315 USD/MT (or $11.30 CDN/bushel). From a domestic standpoint, we’ve seen many buyers relax their bids off of those $9CDN/bushel handles this week and move back into the $8s for #1 and #2 CWAD, low disease quality. While we see those double-digit values for delivered overseas deals, we have to admit that it’s very possible that the highs of the marketing year are now in with U.S. and export demand remaining subdued (remember that the US durum crop was its biggest in seven years and one of the best ever in terms of quality).

Finally, this week the USDA released their 10-year baseline numbers (used for government budget reasons) and it raised a few eyebrows. Throwing their first forecast into the ring, the USDA is expecting 90 million acres of corn and 85.5 million acres of soybeans (a record) to get planted across America in 2017 (-4.8% and +2.1% year-over-year, respectively). Wheat acreage is expected to be down 4.4% from 2016 to 48.5M acres with yields down more than 10% to 47.1 bu/ac.

From a production standpoint, the USDA’s first estimate of next year’s crop suggests more trendline yields of 170.8 bu/ac corn and 47.9 bu/ac soybeans, respectively -2.6% and -8.8% from this year’s records. What we know for certain is that the market tends to also overweight the value of these “first” estimates so we can assume corn and wheat acres in American are heading lower in 2017, while soybean acreage will expand as oilseed demand continues to grow steadily. While we don’t know what next year’s crop will hold, we do know that some of the recent highs and some opportunities in the next few weeks (even months) could be given ultimate consideration for a sale of either this year or even next year’s crop.

Lock in some profit to protect against the downside risk

Musical Chairs — This Week in the Grain Markets

Mind Your Farm Business — Ep. 7: How Do you Manage Currency Risk?