The trend higher for soybean acres in Western Canada isn’t showing any sign of slowing down heading into the 2017 growing season.

Just over 1.6 million acres of soybeans were grown in Manitoba in 2016.

“Going into 2017, the early projections are we could see upwards of two million acres of soybeans…a 350,000 acre increase over this past year,” says Dennis Lange, pulse crop specialist with Manitoba Agriculture, speaking at St. Jean Farm Days in St. Jean, Manitoba earlier this month.

Acreage is also expected to climb once again in Saskatchewan — soybeans were one of the hot topics at the Crop Production Show in Saskatoon last week. 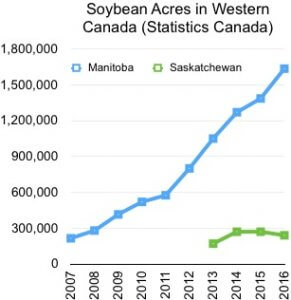 Not only have acres been rising rapidly, but yields have also been climbing, despite acres expanding north and west. According to Statistics Canada, Manitoba set another record with 41.3 bushels/acre in 2016.

So how long can this story continue year-after-year?

While root rot issues are starting to become more common, and soybean cyst nematode has been found just across the U.S. border, the rapid expansion in acres has also been helped by the absence of early frost since soybean production took off in western Manitoba, notes Lange.

“We haven’t had a killing frost in six years (that hit immature soybeans), so the expansion out west has grown every year because they’ve had good success,” he says.

“That dropped the acres the following year and we only had an eight bushel/acre average in 2004,” he notes.

“There might be a correction if we do get a fall frost in early September that causes some quality and yield losses, but until that point we’re probably going to continue to see acres rise.”

Lange discusses expectations for soybean acres in 2017 and some of the factors that could impact the trend higher: