Dylan Sher didn’t grow up on a farm. Coming from the Toronto area, the third-year agriculture student at the University of Guelph admits he didn’t know much about farming before heading to university.

And that’s providing him with a unique perspective as he works toward the lofty goal of debuting a film about farming and food at the Toronto International Film Festival.

Together with a close friend who’s studying film, Sher is leading the “Before the Plate” project, which aims to tell the story of and answer questions about food production in Canada.

“Instead of just being a film about farming, we’re taking the final product all the way to an urban restaurant in Toronto. The film will essentially rewind a plate of food all the way back to the farm, so you’ll be able to see everything along the way. We hope that’s a more relatable scene,” he explains in the interview below. 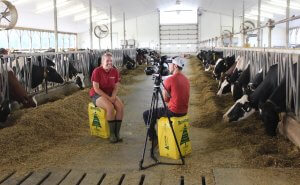 So far, the project mainly lives on social media, with dozens of short videos and interviews on the “Before the Plate” Instagram, Facebook and Twitter pages.

When it comes to sharing the project with his ‘city’ friends and family, Sher says they’ve been intrigued and impressed.

“What has become normal to me is fascinating to them,” he notes. “I think they feel like ‘Before the Plate’ is probably the closest thing they have to talking to a farmer, and if that’s the case, I think we’ve done a pretty good job.” 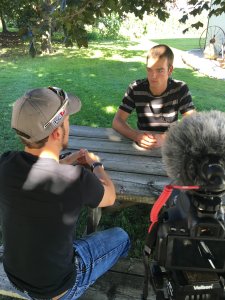 Last week, they introduced the #beforetheplate challenge on social media, encouraging people in the farm community to share a photo of their favourite moment on the farm and nominate three friends involved in agriculture to do the same.

A Kickstarter campaign has also been launched to fund the work needed to make a film that will qualify for TIFF in 2018. Sher says they plan to complete the documentary before the world-famous film festival’s entry deadline in April 2018.

Listen to Dylan Sher discuss the plans for “Before the Plate,” how he hopes to engage an urban audience and more:

And a preview of “Before the Plate”:

Sell the Rumour, Buy the News Applies to Ontario Farm Land, Too