I’m a big advocate of democracy. I defend the free press globally, especially the agricultural free press, and people’s right to say what they want, as long as they don’t misuse it by slandering or scurrilously pursuing others. 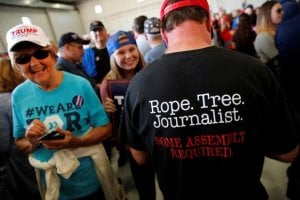 But when I see Donald Trump supporters flaunting slogans like Rope. Tree. Journalist. Some assembly required, as they were on the campaign trail just a few months ago, I wonder about the future of the free press.

You can understand why I reel at the suggestion of stringing up journalists with whom the president’s supporters disagree. Imagine if the occupation being targeted was farming. What if the leader of the world’s most powerful nation looked down his nose at you and said you’re not credible, you grow fake food, like he did last week at a press conference where he accused a CNN journalist of producing fake news. So what’s next…the rope?

Trump’s arrogant, dismissive approach is no more sophisticated than that of activists who point at farmers and make unsubstantiated statements like you’re poisoning me. Activists say it because they hate modern farming, crop protection and technology such as GMOs. Their slogans are catchy and make headlines. And then it’s over to you to, agricultural sector, to counter the claims, to prove you’re actually keeping people, activists included, healthy and alive.

We know what a toll this incessant antagonism is taking on farmers’ mental health. For some, it rolls effortlessly off their psyche. But as a University of Guelph study is showing, pressure on farmers and the constant fight against what’s become know as “post-truth,” or lies, is causing real problems.

This, unfortunately, is the world we’re entering. Maybe people are tired of hearing doomsday forecasts about Trump’s leadership. But how, as a journalist, farmer or almost any other occupation, do you take the high road?

I’ve tried looking at this situation democratically. No matter how much it hurts, the democratic will of people who vote, even when they vote for Donald Trump, must be accepted.

And with his inauguration upon us, it’s important to remember it’s discontent and frustration that attracted voters to him, not sound policies or proposed programs. If the problems get fixed, there’ll be fewer places in society for opportunists like him. So let’s hope he makes progress trying to fix them.

Trump’s inauguration won’t be stopped by protest marches. They’ll make it clearer than ever he is unpopular with some groups – huge groups, in fact – but as much as anything, I suspect the protests will feed his ego. He delights in dismissing, belittling and even humiliating those who disagree with him.  This won’t change as he accepts his new role as president of the world’s most powerful nation. 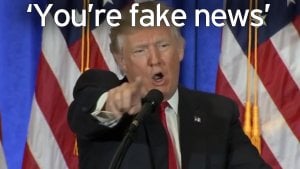 Among my many concerns with his presidency is this: in his zeal to appease the malcontents at home, he will lose sight of America’s role in helping feed the world. Somehow, those who advocate for hungry people in developing countries must convince him of his huge influence over millions of peoples’ lives. As a nation, Americans are generous and giving. He is an American. Can we appeal to his sense of compassion? For someone who became famous for publically disgracing and firing people, it’s a stretch.

The bigger problem, bigger even than Trump, is that we’re at a crossroads for world hunger, and everyone knows it. Farm magazines like John Deere’s Furrow are publishing stories about how, despite record U.S. crop production, the world is falling short on food. It’s said farmers need to increase their output by 1.75 per cent annually to meet future food needs. But they’re stuck at 1.73 per cent. And all the while, the population grows.

Here’s where my prayers are going. I’m imagining a scenario at which some point in his presidency, Trump realizes he could leave a truly admirable, long-lasting legacy by getting behind efforts that will help feed the world. Yes, this would include aid that fill gaps in disasters. But more importantly, it would involve support for imaginative, evidence-based programs that help farmers in developing countries try to meet domestic needs. A commitment to research is needed, not subsidy programs for America farmers.

No more rope-tree-journalist garbage. No more name calling. These are not the hallmarks of a great leader.

The need for greater domestic food production programs comes at a time when the organization of which I’m president, the 5,000-member International Federation of Agricultural Journalists, is making new inroads into developing countries. A free press is vital for agriculture to advance, and for farmers to have the best information possible to manage their operations. It doesn’t matter if you have 30,000 acres in Saskatchewan or an acre in The Gambia. The scale is different, but the need is similar. And overwhelmingly, the agricultural media, operating independently, has a huge role in delivering that information.

I don’t know a single person who thinks the next four years won’t be difficult, and maybe even disastrous. But everywhere farming takes place, including Canada, opportunities exist for farmers to make positive change by staying focussed and working hard to connect with society. Everyone will need to work together to keep our agri-food sector moving forward, in the face of one of its greatest challenges ever: President Donald Trump.

2 thoughts on “Trump Legacy: Feed the World, or the Ego?”