Corn plants do indeed yield less when they emerge one day after their neighbour. What’s more, the yield gap widens even further for later emergers.

That’s the bottom line on the 2016 Real Agriculture flag test research,conducted by resident agronomist Peter Johnson. In this episode of Corn School, Johnson tells co-host Bernard Tobin that, based on his trials, plants that emerge one day after the first plants have broken the soil surface will yield 5% less; plants emerging two days late will lose 8% of their yield; and those appearing three days late will lose 14%. The news gets even worse for laggards emerging four days late – they yield almost 40% less. 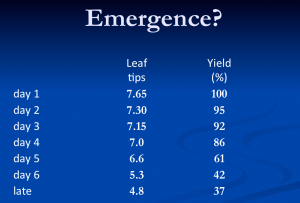 Johnson notes that the research reinforces the theory that even emergence has a greater impact on yield than even plant spacing, but it also highlights the importance of proper soil conditions at planting.

Having adequate downforce on the planter to ensure seeds are planted at an even depth is just one management practice to help growers promote even emergence, says Johnson. He cautions, however, that poor soil conditions can undo even the best laid management plans.

“It’s important to get them all up on the same day, but make sure the soil is in the right condition, so the plants don’t change as they go through the growth stages. It’s not just the emergence.”

What to Consider When Buying a Liquid Manure Spreader (Honey Wagon)