As officials left the recent trilateral meeting between Canada, United States, and Mexico, RealAgriculture’s Shaun Haney was able to talk about the outcome of the meeting with Colin Woodall, National Cattlemen’s Beef Association (NCBA) vice president of government relations. 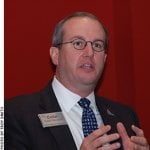 When Shaun talked to John Masswohl, with the Canadian Cattlemen’s Association, it was clear that the Canadian team was playing it calm. Woodall expressed reasons for a heightened level of concern regarding the future of a stable beef trade between the three countries.

In the interview below, recorded at the NCBA convention, Woodall expressed to Shaun that the U.S. beef industry is losing money everyday without the Trans-Pacific Partnership agreement. With NAFTA’s future also a concern, Woodall and his team have some work ahead of them to ensure the new Trump administration understand that agriculture needs trade and the current NAFTA agreement is working for them.

Beef Market Update: Volatility, optimism, and the murky waters of what lies ahead for demand