Last week at the National Cattleman’s Beef Association meeting in Nashville, I attended NCBA’s annual International Trade Committee meeting. With the all of the stir created by President Trump on NAFTA and TPP, the committee meeting on Friday afternoon could not have been more timely. One of the speakers was international trade lawyer Gary Horlick. His address to a room packed with beef producers was absolutely fascinating.

Everyday we are fed a lot of information — some of it fact, some speculation and some is pure BS. I have my own theories on many topics, but as I try to formulate an opinion I listen and ask questions of the smart people — individuals who have an inside context to formulate an opinion based on their experience and knowledge of a topic. On trade, Gary Horlick is the smart guy in the room. 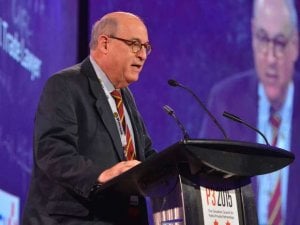 Horlick is one of the highest-ranked international trade lawyers in the world and has worked in senior positions in the U.S. Congress and the Executive Branch, where he was responsible for all U.S. antidumping and countervailing duty cases, Foreign Trade Zones, Special Import Programs, and the negotiation of the U.S.-EU Steel Agreement.

Horlick discussed several trade files at the NCBA trade meeting. Here are my in-person notes on what he said:

China and rest of Asia

To sum it up, as a Canadian sitting in on an American trade meeting, I thought Horlick had balance and some sobering thoughts for the cattle people in the audience. As all countries search for a “better deal” in this time of trade pandemonium, agriculture waits to see it’s fate. Outside of protected sectors like dairy and sugar, NAFTA has been very friendly to agriculture. In any negotiation there are concessions. Whether in the Canadian, U.S. or Mexican camps, the concern is that agriculture is used as a concession and loses in the end.

Move away from neonics not reflected in MOECC corn planting statistics