Farm & Food Care Saskatchewan (FFC SK) has opened nominations for its Food & Farming Champion Award. This award, now in its second year, was designed to “shine a light on the people who work hard to promote Saskatchewan agriculture and help farmers build public trust in our food industry.”

“We had tremendous success with the award last year and received nine nominations from all sectors of the industry.” says FFC SK’s Executive Director, Clinton Monchuk. “We put more detail into our nomination criteria and we are looking to carry forward that momentum into this year.” 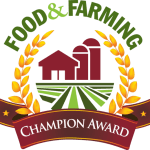 The Food & Farm Champion Award is awarded to an individual who has taken the initiative to speak up about agriculture in Saskatchewan. Nominees are judged on ten pillars of public trust: advocacy, communication, leadership, participation, support, policy, teaching, publications, innovation, and research. Candidates have demonstrated the use of their skills to help engage consumers or correct misinformation about production practices, and have done a measurable job of promoting the agriculture sector.

Saskatchewan veterinarian and epidemiologist, Dr. Leigh Rosengren, was the 2016 recipient of the Food & Farming Champion Award. Her work in the research, education and advocacy of prudent antimicrobial use in livestock production, along with her consistent media and social media presences made her an ideal candidate.

For more details, download the nomination form or check out farmfoodcaresk.org or Download the 2017 Nomination Form Here

Nominations are to be submitted to the FFC SK office by September 30, 2017. The selection committee will choose a winner from the nominations and award winners will be honoured at the Farm & Food Care Saskatchewan Annual Conference on December 13 & 14 in Saskatoon, SK.

Is that a PBR-Protected Variety? New Online Tool Helps You Find Out