Grain markets cruised through the St. Patrick’s Day week with not a whole lot of luck as a pot of mostly bearish news was found by the time the green beer started to get poured. Oats and corn were the only grains to celebrate the week in the green, up 1.6% and 0.95% respectively, with the later mainly thanks to some strong export sales. Soybeans and wheat ended down 0.6% and 0.9% respectively from last Friday in a rangebound week.

On the currency front, the U.S. Dollar lost 0.9% while Canada gained 0.9%, which meant canola became more expensive to international buyers, and accordingly lost 3.35% for the week. With almost no headlines to trade off this week, the market looked to outside market macro moves and ahead to the USDA’s stocks and acreage report on March 31st.

There’s been a fair amount of wheat tenders lately, including those from Egypt, Indonesia, and Algeria. This is a good thing in terms of an indication of demand, but the problem is that literally millions of tonnes got offered up, demonstrating that there’s a lot of exportable grain left in the world. While there’s still a fair amount of last year’s crop available, soil moisture and growing conditions in the Black Sea are considered to be pretty good right now, albeit not as favourable as where the winter crop emerged last year. In the U.S. dry conditions continue to be monitored in the U.S. Southern Plains, which is likely to stay dry for another week before getting some precipitation (and hopefully mitigate any more disastrous wildfires.

Canadian durum prices are unable to emerge from the $7 CAD / bushel basement they’ve been sitting in as it continues to be pressured by competition abroad and subdued demand for higher quality (the market just isn’t paying for the higher premiums that farmers have been hoping for). Compounding things is the Mexican durum crop starting to get harvested in May (and it looks pretty decent right now) and Europe’s crop, 2 months later, meaning more supply becoming available. For the record, thus far in the 2016/17 marketing year, Canadian durum exports are down 15% year-over-year, while all other wheat exports are down 20% compared to this time a year ago.

Speaking of exports, Thursday was highlighted by the 1.47 million tonnes announced in U.S. corn sales last week, the largest number in the past 3 months, which ironically comes at a time when U.S. sales start to slow down. On the flip side, U.S. wheat sales last week were the smallest for the 7-day period in the past 8 years! Thus far, 92% of the U.S.D.A.’s wheat export target has been sold, under the 95% 5-year average for this time of year. For corn, 80% of the U.S.D.A.’s 2016/17 marketing year export forecast has been contracted.

Meanwhile 97% of the USDA’s soybean target has been locked up, above the 92% average usually seen by now. U.S. soybean export sales have certainly slowed though, what with pressure from South American crops, but also, as Chinese crush margins have gone from a 5-year high to a 5-year low in a matter of 3 months, meaning that they may be slowing their interest in buying internationally.

Comparably, the latest port data from Brazil shows that 3.7 million tonnes of soybeans have shipped out in March thus far, with another 5.8 million tonnes likely to head out by the end of the month (for those looking at the calendar date and saying these numbers aren’t equal, exports in the first half of March were slowed by sluggish truck deliveries to port locations as a result of rains & traffic jams). Doing a little math, this would put total March soybean exports for Brazil at about 9.5 million tonnes, a 15% jump year-over-year.

While big numbers get shipped out, positive yields continue to get reported and total production expectations only continue to rise between both Brazil and Argentina. This is mainly because growing conditions continue to be ideal (and better than last year!). Just as the soybean crop comes off in Brazil and 2nd planting / safrinha crop gets put in, in Brazil’s corn belt, rainfall is roughly double that of a year ago. In Argentina, while things started out quite wet in a few places, drier conditions have persisted and will continue to do so for the next few weeks and although 1 more rain could be ideal before combines get rolling, below-average temperatures will limit the amount of stress plants receive.

AgResource thinks that because of the massive supply of soybeans coming down the pipeline, demand could soon switch to canola, with one large factor being how many tonnes of rapeseed oil China has sold from its reserves (it was sitting at 4 million tonnes about a year ago). This in mind, soybeans were pressured this week by the NOPA crush number for February, which came in at 142.8 million bushels of soybeans used in America, well below the 146.1 million bushels that the market was expecting.

Much like the disappointment the market had with the U.S. soybeans crush number, the U.S. dollar lost some lustre following the U.S. Federal Reserve’s decision to increase interest rates by 25 basis points (or 0.25%). Usually, when a country’s interest rates increase, the currency of that nation will strengthen. However, the market had already priced in the interest rate move and was looking for bullish commentary from the Fed Chairwoman Yellen but instead got bearish cautiousness and the likelihood of only 2 more rate increases in 2017. Accordingly, the Canadian Loonie jumped the most in a year to back up above 75 cents USD, which in turn has put a little bit more pressure on the recent deflating value of canola.

Overall, while we saw some parts of North America have to dig themselves out of a big snowstorm, the itch for Plant 2017 continues to grow despite, some acres in Western Canada that still need to get harvested (almost 1,000,000 unharvested acres claimed in Alberta alone). That being said, most market minds are on the next few weeks ahead. Brazil soybeans harvest is now past the halfway point as Argentinian farmers are preparing for the start of their own soybean harvest. With nothing else to really trade off of, other macros and weather forecasts will be the focus over the next week or so (with the unlikelihood of any pot of gold getting found). 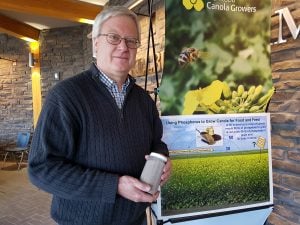 With 20 years of teaching and research achieved, Don Flaten says it's time to retire. It's a retirement well earned, as the soil scientist with the University of Manitoba has taught over a thousand students the ins and outs of soil, its importance, and revealed to many the complexity of nutrient interactions. Flaten has also…Read more »

This Week in the Markets: The Rising Canadian Dollar and Diverging Sentiment