As far back as 2001, Fortier, Man., farmer and seed dealer Darcy Miller was growing soybeans. With his agronomic savvy, he saw their potential, and watched through the years as they caught on with other farmers in the province. Now, it’s estimated Manitoba farmers will plant around two million acres of soybeans this year.

So given this crop’s popularity, it will be no surprise to see a 100-acre field of soybeans planted on the Miller farm this spring.

This field, however, will be unlike any other on the 4,000-acre operation. It’s key to a legacy that goes far beyond Miller Agritec’s farm gate.

Darcy, a fourth-generation farmer, began a battle with colon cancer in 2014. From the onset of his diagnosis, he resolved to contribute in some way to those providing cancer treatment and working towards a cure for the disease. So in conjunction with CancerCare Manitoba, he created a program called Growing Support for Cancer.

According to his vision, for three years starting in 2015, he would grow a 100-acre crop on the farm he ran with his wife Andrea and their four children, sell the harvest from that crop, and donate the proceeds to CancerCare Manitoba.

The project got off to a great start, with Darcy choosing soybeans for the first year of the program. The Millers donated the seed and land; Portage Agri Sales, along with chemical reps, helped donate crop protection products and fertilizer. Friends joined in to take off the harvest.

The Millers hosted on-farm events to publicize the cause. It gained momentum as others joined in with additional contributions from land they’d set aside for a crop for Growing Support for Cancer.

Ultimately, sales from the soybeans netted around $60,000. All told, the first year of the program raised more than $86,000.

The following year, Darcy switched to wheat. The harvest brought in more than $37,000.

But unfortunately, that was the final crop Darcy would see. Last October, he lost his battle with cancer, at the age of 50.

The fund, though, didn’t stop growing. In fact, the opposite has happened: it gained appreciable momentum, aided by memorial donations in Darcy’s name that were directed to Growing Support for Cancer. Those donations alone generated $30,000. 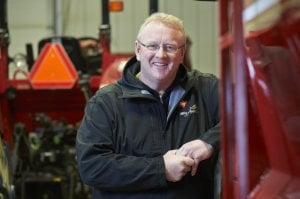 This winter, Andrea, who is now running the farm and the pedigreed seed business along with five employees, finalized plans to honour Darcy’s three-year commitment. When planting season arrives, the farm will commit 100 acres of soybeans to the cause.

Given that commodity’s history on the Miller farm, it seems like a fitting choice.

CropConnect ’17 chose Growing Support for Cancer as its charity of choice this year, making donations to the project in lieu of speaker gifts. “Darcy’s legacy will grow on, and the CropConnect17 conference committee is honoured to support this worthy rural Manitoba project,” it said.

I was one of this year’s speakers. And as a cancer survivor, that also seemed to me like a fitting choice.

I regret never having had the pleasure of meeting Darcy, a man who left a big impression on those who knew him.

“Darcy was an avid supporter of the seed industry in Manitoba,” says Jennifer Seward, Manager of the Manitoba Seed Growers’ Association. “He was a select status grower, thoughtful, and well spoken. His loss will be felt in Manitoba’s seed industry for many years.”

Kelvin Heppner, now a RealAgriculture.com mainstay, remembers Darcy as a proactive farmer and radio program listener. “Darcy was super friendly, always engaged, and not afraid to provide feedback,” he recalls.

And I get a feeling that it won’t be long before, in farm circles, we’ll be hearing from the next generation of Millers.

Andrea says already, oldest son Graham, 13, is immersing himself in as many aspects of the farm operation as he can. His brothers Carter, 12, and Ian, 10, are likewise interested in farming.

In fact, so is sister Marae, 9, who says eventually, she’ll be running the farm…and the boys will be working for her.