As we entered the month of March, grain markets ate up a lot of volatility on U.S. ethanol policy rumours, a stronger U.S. Dollar, and logistics issues in Brazil. Soyoil and canola were the big winners of the week, gaining 5.4% and 3.5% respectively, while corn fared pretty well too, up 2.7% since last Friday’s Chicago futures board close. Soybeans did well too, but did pull back from their mid-week highs, closing 1.25% higher for the week, while wheat only gained 1%. Oats was the biggest loser for the week, down 2.8% as the increase in acres in 2017/18 becomes more of the focus going forward, with supply needs relatively well-contracted over the next 3-6 months.

Better values in the oilseeds and corn was mainly related to South America and U.S. biofuels policy, which is being highlighted by the ethanol debate in Washington that is now pitting refiner against blender, with some executives getting into the name-calling game. The issue at hand is the point of obligation which basically determines who is responsible for blending into the ethanol into gasoline. The new President Donald Trump administration has more than a few people who are looking to change some of the regulations in the ethanol industry, including Carl Icahn (special adviser to the President) and Scott Pruitt (the new EPA head, albeit has advocated against it a lot in the past).

The strength of the U.S. Dollar is certainly pushing against export potential of U.S. grains, whereas its strength is creating new windows for Brazilian farmers to sell (much like how the Canadian Loonie goes down and helps Canadian grain prices go up a bit). While sales are being made, deliveries to northern Amazon River ports are not as rains have made it difficult to deliver on the non-paved highways. Estimates put the soybean-truck traffic jam at about 50 miles made up of over 3,000 trucks!

Informa also raised their Argentinian wheat harvested to 17 million tonnes, but that still falls behind the Argentinian Ag Ministry forecast of 18.4M million. As it stands for South American weather, it’s been estimated that Argentina needs another 3-5 weeks of average sun and rain to produce good yields, and if benign weather shows up, another 1 – 2.5 million tonnes of soybeans could find its way to the bin. Back in Brazil, the soybean harvest continues with expectations that major producing-region Mato Grosso will be closer to 80% combined by the end of this weekend.

The European Commission made its first 2017/18 wheat forecast, calling for 143 million tonnes produced in Europe, which would be a 6.5% rebound from last year’s poor showing Their call is just 800,000 MT behind Strategie Grains’ estimate and like Strategie, this rebound is mainly due to French wheat production returning to normal levels, with the Commission calling for a 26% increase in output compared to last year. From an acreage standpoint, they see soft wheat area dropping a measly 1.3% year-over-year (YoY) to 58.8 million acres and durum acres at 6.18 million (down more than 6% YoY). Soft wheat and durum area combined, this would be a 1.8% drop year-over-year and slightly below the IGC’s call of 66.5 million combined acres planted in Europe in 2017/18.

Spring seeding conditions continue to be relatively ideal for German and French malt barley growers, getting them into the field well ahead of the normal pace. This will put some pressure on the market but we’ve seen some very strong sales of old crop malt barley on the FarmLead Marketplace the last 2 weeks for delivered prices above $6 CAD / bushel in Western Canada.

Paris wheat futures prices hit a 7-month high this week on the new that Egypt bought 125,000 MT of wheat from France as part of its 535,000 MT tender, indicating just how competitive other options have become since the Russian Rouble has strengthened. The purchase takes the GASC to 5.14 million tonnes of wheat bought thus far in the 2016/17 season, which would be 22% higher than the 4.2 million tonnes locked up by this time last year.

The demand is welcome as the wheat market needs to work through a lot of grain and it helps that next year we’ll see a smaller global output, with the U.N.’s FAO calling for a 744.5 million-tonne crop, the first production drop in 5 years. The FAO’s forecast includes the expectation that Russia will harvest another bumper crop in 2017/18, this one being 74 million tonnes large. However, everyone else is more bearish, calling for world production around 730 -735 million tonnes with acres down in North America, especially in Canada where it’s likely we see more non-wheat cereals like oats getting planted, because of disease issues becoming more commonplace lately.

In India, there’s speculation that the government’s import tax on wheat could hike back up to 25% in the next couple of weeks as they continue slow down shipments coming in ahead of the rabi winter crop harvest. The Indian government is currently forecasting at 96.6 million-tonne wheat harvest this year, but the USDA is only expecting 87 million tonnes to come off. 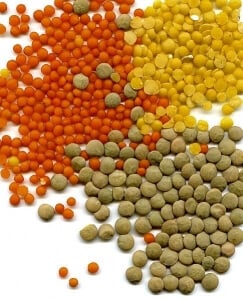 On the pulse crop front, we’ve seen more than a few grain buyers go “no bid” until there’s more clarity on the Indian fumigation and import needs. Bids will likely return, but as the Saskatchewan Pulse Growers pointed out this week, 90% of Canadian yellow peas go to 3 countries and 86% of small red lentils go to 5 different nations. If there’s a hiccup in the trade with any of the partners, things can get ugly fairly quick (such as now).

Things will get ironed out but many are hopeful it’s before the Indian rabi crop’s harvest finishes and prices potentially move lower because of decent yields. Trying to push prices back higher though will be the Canadian Dollar, which dropped 2.1% this week as there’s more expectation from the markets that the U.S. Federal Reserve will hike interest rates this month.

While the market’s already pricing some of this U.S. Greenback strength, Goldman Sachs think it could appreciate another 10%, which would put even more pressure on the Loonie. The drop has helped canola immensely this week, as has the continued strong demand for domestic crush and exports. Canola futures pushed back above the $12 CAD / bushel on the Winnipeg ICE futures board for front month contracts while new crop $11 / bushel cash prices became available again.

Next week we’ll get the USDA’s monthly WASDE report but all eyes this month are going to be on the acreage report on March 31st. Separately, more eyes are focusing on spring wheat reports, and while there continues to be bullish headlines like “El Nino May Be Fast-Tracking Arrive By Summer”, I’m taking these with a grain of salt as the needle that declares a La Nina versus an El Nino literally just pointed to The Boy’s direction.

The NOAA is expecting the most southern and eastern halves of America to have above-average temperatures but also expect the majority of U.S. farmers to enjoy decent planting conditions. While everyone can agree that weather forecasters are hardly accurate, from a grain marketing standpoint, the best place to start is to expect trendline/average yields, which should should be less than last year’s records. Why? Because that’s what the market will be focusing on for the next few weeks before we start scratching dirt for Plant 2017.