What happens when a supplier and a processor can’t agree to a contract? In some cases, the parties walk away from the deal. In others, such as is usually the case between Ontario’s processing-vegetable growers and processors, there’s a set out and agreed upon mediation process. If that doesn’t result in a deal, the parties agree to move to a binding arbitration process.

Why then, when contracts where in fact moving forward with two out of three vegetable processors, did the provincial government step in and dissolve the Ontario Processing Vegetable Growers (OPVG) board? If talks were indeed stalled or a production season “in jeopardy,” as the government states in its media statement, the transparent process of mediation and binding arbitration should suffice (it works for teacher-, nurse-, and auto worker- unions).

For Francis Dobbelaar, newly removed chair of OPVG, the entire situation smacks of a processor (or processors) trying to erode farmers’ ability to fairly negotiate for its products. If nothing else, the rare move by the provincial government to fire the board of directors impacts all other processing-vegetable growers — not just tomato growers, he says.

The board was removed March 3. There was an Ontario Farm Products Marketing Commission meeting on March 6, where no questions were taken from the floor, but had to be written on paper before being answered.

Shortly after the meeting with the Farm Products board on March 6th, over 70% of processing-vegetable growers got together to hold their own meeting, forming a new (symbolic) organization. Under the Farm Products Marketing Act, the Ontario Processing Vegetable Growers, run now by a government appointed trustee, is the only organization identified as representing processing vegetable growers.

Still, Dobbelaar says, the move shows that the majority of processing-vegetable growers want to be treated fairly, have fair representation, and have a say in contract negotiations.

“The ‘crisis’ was created by one company, by one person within one company,” says Dobbelaar. “This short-term action will have long-term implications for the industry, and not just for the tomato industry.”

Dobbelaar also says that, stemming from pressure from processors last year to change the regulatory process by which farmers can negotiate, the group was awaiting a report that was due to be tabled March 8, 2017 (by the minister’s directive). The report was commissioned to “develop a plan for engagement and consultation with interested parties and stakeholders concerning any proposed amendments to the regulatory framework for the vegetables-for- processing industry,” and was instructed to include a “detailed economic analysis of industry competitiveness and opportunities for growth… in support of any proposed amendments.”

The commissioned report, which was intended to offer guidance on revamping pricing protocols for the industry, was not tabled ahead of the government’s decision to pull the OPVG board, however it was completed before the beginning of March, dated February 24, 2017. 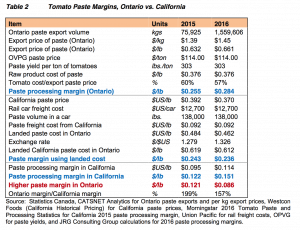 Processors claim that the current regulations are hampering industry growth, but Dobbelaar points to the third-party-verified, commissioned report which shows an increase in exports and lists industry cost-competitiveness vs. California (as listed on page 23 of the report).

In the meantime, Elmer Buchanan, a former Minister of Agriculture, Food and Rural Affairs acts as trustee of the OPVG and assumes the power of the OPVG board with a mandate to complete the 2017 negotiations in a “manner consistent with the current regulatory framework and the government’s support of regulated marketing and marketing boards in the province of Ontario.”

As for when processing-vegetable growers find out what kind of contract they get, we’ll keep you posted.

The next “it” vegetable you’ve likely never heard of

These Cucumbers Glow Pink — A Tour of SunTech Greenhouse

One thought on “What’s next for Ontario’s processing-vegetable growers?”