Grain markets dealt with a sideway 3rd week of April thanks to weather concerns, acreage estimates, and planting progress owning headlines. Canola was the biggest winner for the week, up 1.4%, while conversely, oats was the sorest loser, down 0.8%. Corn and wheat were slightly lower, down 0.35% and 0.2% respectively, whereas soybeans gained 0.4% since Good Friday. Ultimately, the market is trying to price in whether delay in the 2017 crop going in will negatively impact production numbers, and if so, by how much.

The question that everyone is asking right now is how much corn is going to get planted in the U.S. if it stays too wet to plant the coarse grain, and farmers are going to instead switch into more beans. There continues to be a daily battle amongst traders with the bulls arguing for a smaller amount of total area going to corn (meaning smaller production, which means a better price), whereas the bears just think it’s too early to make this call. Why? The American farmer can plant a lot of acres in a short amount of time.

More specifically, the American Farm Bureau points out that in 2014, 56% of the entire corn crop got planted in the first 2 weeks of May. Further, in 2013, producers seeded 43% in the 1 week between May 19 and May 26 alone! Another bearish data point has come from the NOAA’s Climate Prediction Center with stated that it’s not expecting significant drought conditions throughout much of the central U.S. for the next 3 months.

That being said, Karen Braun of Reuters points out that in the last 20 years of seeding, corn planting in the U.S. saw a slow start similar to this year 12 times, and of those 12, there were 6 years when final acres came in below the March acreage forecast from the USDA With so many people wailing about more soybean acres going in because of the wet/slow start for corn planting, Braun points out that the best historical reference point to get a solid understanding of this is actually the 3rd week of May. 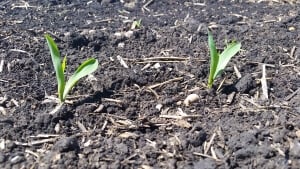 Further, trying to understand yield prospects at this date is no more definitive as it is in late May when the large majority of the crop should be in the ground. Overall, if you’re watching U.S. corn planting progress as closely as some other market players, in exactly 1 month from now, the USDA’s crop progress report will come out on Monday, May 22nd. The 20-year average of corn seeded by this date is 86% but if we can reference history at all, it always will come down to the growing conditions (2012 was one of the fastest seeded crops but drought conditions led to one of the worst harvests).

Where we know corn acreage is definitely dropping is in China. The Chinese National Bureau of Statistics, China’s corn acreage is expected to drop 4% YoY while soybeans area should increase by 8% as the government in Beijing switches its policies on what crops to support. This is in line with what China’s Agricultural Ministry is forecasting Chinese corn acreage to drop 5.4% from last year to nearly 90 millioin acres while soybean area should jump by 8.5% to 17.3 million acres. By 2020, their hope is to be planting 23.2 million acres of soybeans while corn acreage is supposed to drop to 82.3 million acres as they try to rid themselves of the 250 million tonnes of corn they’re sitting on (or a 10-year stockpiling policy that’s gone bad).

Next door, India is expecting to get another good year of monsoon rains according to the India Meteorological Department. They are estimating that the 4-month-long season that starts in June should be about 96% of the 50-year average (last year’s monsoon was 97% of the 50-year average). This is significant for both rabi and kharif growing seasons there as the monsoon rains account for 70% of all moisture received during the year and provides water to the majority of India’s farmland. With prices below the government’s minimum support prices though, will pulse crop acreage in the Asian country come in near last year’s record. My guess today is no but it will probably align closely with the 5-year averages as prices are still elevated relative to where they were before the droughts hit and India is still importing a fair amount of pulses.

Case in point, wheat exports in Australia haven’t been as strong as everyone was originally thinking as competition for boats and containers at the port with canola and pulses crop. This has led the U.S.D.A.’s attaché in the Land Down Undaa to downgrade outbound shipments of the cereal to 22 million tonnes for 2016/17 and 18 million in 2017/18. After a bumper/record crop of over 35 million tonnes produced, the Australian U.S.D.A. office believes that only 24 million tonnes of wheat will be harvested down there in 2017/18 (technically, this would be a -31% drop year-over-year).

A similar rise in wheat ending stocks is also expected in the Black Sea as Russian wheat exports didn’t hit the numbers the Kremlin was originally hoping for while Ukraine’s production is likely to dip a bit in 2017/18 (less acres got seeded with wheat), which means wheat exports from there are also expected to be a bit lower year-over-year at 12.9 million tonnes.

Finally, on Friday, April 21st, Statistics Canada came out with their pre-seeding estimates for the 2017 Canadian crop and per usual, they lifted some eyebrows and caused some headshakes. Specifically, StatsCan that Canadian farmers are going to be planting an additional 2.4 million acres over what they did in 2016, begging the question, where are these additional acres coming from? You have to assume that marginal land being brought back into production but from where? Are pastures being broken up?! Are sloughs getting seeded?!

Digging into the report, canola and wheat were the two many numbers that the market was looking for. Canola acres in the Great White North in 2017 are estimated by StatsCan to hit 22.4 million acres, which is a 10% climb (or 2 million acres more) from 2016 and 7.5% more than the 5-year average. Regionally-speaking, Alberta and Saskatchewan are owning all of the increase, putting in 870,000 and 1.175 million more acres respectively than they did in 2016 for 12.275 million in Saskatchewan and 6.82 million acres in Alberta.

Conversely, Manitoba canola acres are actually down a bit year-over-year to 3.1 million but soybean and corn acres are up, notably up by 565,000 in beans to an astounding 2.2 million acres (food for thought: in 2012, Manitoba soybean acres were 800,000). Combine this with Saskatchewan’s similarly-significant hike to 730,000 acres of soybeans, and over 4 million acres of the oilseed getting planted between Quebec and Ontario, nearly 7 million acres of soybeans will get planted in Canada this spring.

Looking more broadly, we can ascertain that Statscan’s phone surveys suggest more oats, spring wheat, canola, and soybeans are getting planted instead of durum, barley, peas, and lentils. More specifically, Statscan says that almost 1.5 million less acres of lentils will get seeded this year with almost 4.4 million acres getting seeded (which is actually 20% higher than the 5-year average acres of 3.65 million!) Similarly, pea acreage is expected to dip below 4 million again after last year’s record 4.24 million (this is still 5% above the 5-year average though). Total Canadian oats acreage is up 20% from last year to 3.42 million (+13.6% from the 5-year average) while barley area is expected to fall by 8% to 5.88 million acres (-12% from 5-year average).

Ultimately, we like to see these reports but also tend to take them with a grain of salt. Overall, I think the canola number is a bit high but probably do-able. However, spring wheat is a bit overstated and the drop in lentil acreage is a bit extreme. Can the system be improved? Maybe there were some numbers misheard? Perhaps a lot of “how much did you say?”

Production Comas — This Week in the Grain Markets

Rain (in other places) Is Spoiling the Grain Market Parade