For Canada, the average of 7.9% growth in the value of farmland is certainly good news for those looking to sell or leverage land, but it does represent a slight cooling in farmland prices from 2015, when year-over-year growth hit just over the 10% mark. 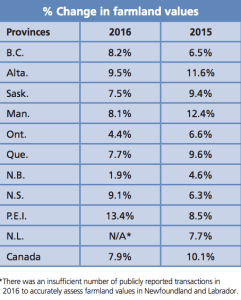 The largest year-over-year growth happened in Prince Edward Island (P.E.I.), where land increased 13.4 per cent in 2016.

The average value of Manitoba farmland increased 8.1 per cent in 2016, following gains of 12.4 per cent in 2015 and 12.2 per cent in 2014, continuing a trend of climbing values since 1992. Similar to parts of Saskatchewan and Alberta, areas of Manitoba experienced some adverse weather conditions. Land value increases in some areas were strengthened by increased yields for potatoes, expansion of planted soybean acres, and general expansion of existing operations and supply-managed sectors. Lower valued land generally increased at a higher rate than land that already carried a high value

Alberta reported the second highest average farmland values increase in Canada, with a 9.5 per cent average increase largely buoyed by grain sector expansion in the north, according to the report.

Barlow in as federal agriculture critic