This column is long overdue. It should have been written shortly after Trudeau announced plans for a mandatory national price on carbon emissions during harvest in early October. Or even earlier, when some provincial governments started announcing their carbon tax or cap and trade programs.

For all the time that’s passed and words that have been said since then, I still have yet to hear a good explanation of how government sees a carbon tax creating the desired outcome in agriculture.

Maybe I assumed somebody would eventually answer the questions the agriculture community needs clarified. Or at least someone would admit they didn’t have good answers. I haven’t seen or read it if they have, so in some ways, this is a last ditch effort to get some answers. Here it goes:

First, a simple, fundamental question — how will making required inputs for food production, such as fertilizer and fuel, more expensive achieve the goal of a real reduction in greenhouse gas (GHG) emissions from farms?

And, if reducing GHG emissions is the number one reason for the additional costs, are carbon taxes the most effective way to achieve this outcome in agriculture?

Yes, higher prices generally result in lower consumption. That’s the rationale behind increasing the price of GHG-emitting purchases. However, the problem in farming is that demand for fertilizer and fuel is inelastic. Consumption can’t be changed significantly in the short term. Farmers can’t simply skimp on fertilizer or reduce the number of times they refuel their combine in getting a crop harvested now that there’s a price on carbon. And if they could, they would. Incentive to reduce consumption already exists, without the additional cost of a carbon tax.

At the same time, the risk of unintended consequences from making critical inputs more expensive needs to be weighed by politicians, as farms are uniquely vulnerable.

Farmers are price-takers on both the input and output sides of their business. When it comes to expenses, fertilizer and input suppliers bump up the prices they charge farmers to cover their carbon tax costs. On the farm income side, grain companies, railways and truckers all carve their carbon tax slice out of the revenue pie. Farmers can’t pass these direct and indirect costs on, and so lower farm incomes and reduced competitiveness versus farmers who don’t face these costs in the U.S. are likely outcomes of this policy.

There’s also the potential for unintended consequences, for example, in livestock and poultry production. To maintain air quality (and animal welfare) inside barns during a Canadian winter, energy for heating — often natural gas or propane — is a significant expense. A carbon tax makes it more expensive for a producer to maintain the same standard of animal care.

This is why I’m confused about why the government thinks a carbon tax is an effective way to achieve reduced emissions in agriculture.

Rather than making farms pay tens of thousands of dollars more each year to maintain current production, government policy should focus on making farmers more efficient with the necessary inputs they use. They should incentivize practices that boost output per unit of greenhouse gas emitted.

In other words, we need to figure out how to grow more food using the same amount or less GHG-emitting fertilizer and fuel. It’s a matter of increasing farm efficiency, instead of disproportionately increasing costs for primary producers.

Since nitrous oxide emissions from nitrogen fertilizer are a significant part of ag’s contribution to overall emissions, it would be logical to implement programs that incentivize improved nitrogen efficiency. For every pound of nitrogen applied, a certain percentage is used by the plant, but some is also lost and ends up in the atmosphere as a greenhouse gas. Farmers and manufacturers have made large strides in reducing losses, but there’s still lots of room to improve. 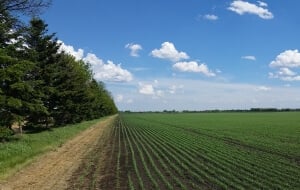 Helping farmers adopt 4R nutrient management practices, investing in technology and research that leads to improved fertilizer efficiency, and fostering crops with N-fixing capability are examples of steps governments could take to have a direct impact on nitrous oxide emissions. These policies would not only achieve the desired outcome of reduced greenhouse gas emissions, but they would also boost the amount of food produced per unit of GHG emitted.

Unless there’s an explanation I haven’t heard, the rationale that a carbon tax will simply reduce consumption for GHG-emitting products appears misguided in agriculture. If we really want to reduce GHG emissions from agriculture, governments should focus on helping farms become more efficient with fertilizer and fuel.

More yield per pound of N or litre of diesel would not only result in reduced emissions per unit of food but it would also reduce farmers’ input costs so they could afford to contribute more to something like a carbon tax.

Ontario, Quebec, Alberta and BC have already followed through and implemented their provincial carbon pricing schemes. To be fair, there are some exemptions on direct costs and some examples of governments investing in fertilizer and fuel efficiency. And whereas a carbon tax doesn’t recognize the sequestration and positive impact of agriculture, the cap and trade approach, which Ontario has taken, potentially allows for farms to receive credits to offset costs.

In Manitoba, the government has said it will implement a carbon tax rather than cap and trade. This new tax is certainly top of mind for many farmers in province right now, with the Pallister government expected to lift the veil on its secretive ‘made-in-Manitoba’ version of carbon pricing shortly.

Here’s hoping it’s not too late to get some answers.

18 thoughts on “Carbon Tax Misses the Mark in Agriculture”