[GREAT EXUMA, THE BAHAMAS] – Farmers everywhere – including the Bahamas — used to get in and out of pigs relatively quickly. It’s not really like that anymore, as farming has become more sophisticated. But back then, when prices went up, herds grew quickly. When prices went down, herds shrunk about as fast.

And so it goes, according to Bahamian lore, that someone who considered him or herself a farmer got into pigs on one of the Bahamas’ small, scrubby, uninhabited islands. Thousands of them exist. This one is one is called White Bay Cay.

ENTER TO WIN A TRIP TO HAWAII – Courtesy of DuPont Pioneer

At the time, it looked like an economic opportunity to raise pigs rent- and predator-free. No matter how far south prices went, this farmer was angling to weather the storm. 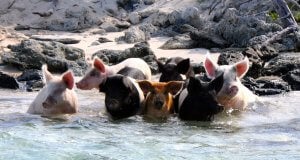 But when your herd is a half-hour boat ride from the mainland, daily watering and feeding is a big commitment – bigger than the farmer had planned for, apparently.

Ditto for veterinary care, not to mention processing.

So, the lore continues, rather than go to the trouble of loading the pigs onto a boat and send them to a packing plant, the farmer bailed, and the pigs were left to fend for themselves. 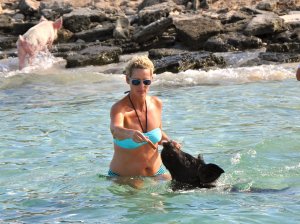 Lightbourn was taken with how the pigs had grown accustomed to humans approaching with food, and how they’d pig-paddle out to greet anyone approaching.

Now, he’s parlayed that understanding into a daily swimming-with-pigs excursion for tourists, called an ocean safari.

Picture it: People and pigs, merrily splashing about in the warm, waist-deep emerald-colour water of Great Exuma. It has gee whiz written all over it, and it’s become a Bahamian phenomenon. Rock stars and models take part, and so do everyday tourists. It’s a riot.

I should say it’s not restricted to White Bay Cay. Elsewhere in the area, some copycat operations have popped up, including the one that made global headlines a month or so ago when half of the 15-head herd on another island died apparently from – oddly, ingesting sand.

But after the incident, Lightbourn contacted me to assure me the White Bay Cay pigs in his care, the ones that have become the most popular of the lot, were just fine.

I wasn’t surprised. He treats these animals like royalty.

Here’s what happens on our visit. As Lightbourn’s comfortable 36-foot, 700-horsepower tour boat glides up to the cay, the pigs slowly emerge from the cover of the island’s natural vegetation. In the boat, guides give visitors chicken wieners as an offering to the pigs.

Once the animals see people hop from the boat into the perfect water with those delicacies, they paddle out to greet their new friends and splash around like giddy dogs, snatching the wieners out of everyone’s hands.

After a few minutes, Chiseled tour guide Lightbourn joins the fray as the pigs return to shore. He trudges from the powerboat to the island with pails of fresh water and feed in hand. He meets their real nutritional needs; for him, these swimming pigs are bringing home the bacon. 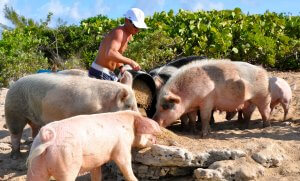 After a 20-minute or so visit and endless photo ops, Lightbourn summons the tour group back to the boat, and we’re off. The half-day safari also includes a stop for what can be some challenging snorkeling, fighting an unusually strong current. Later, Lightbourn rewards his guests with a relaxing cold beer – one of many, in fact – at another stop, under a beach umbrella jammed into metre-deep water.

We kind of expect pigs (no offence, Nicholas Cage).

But instead, crawling from under leaves and bushes and other cover, we see hordes of prehistoric-looking iguanas. They emerge like the swimming pigs, but crowd the beach instead of swimming to meet us. Onshore, we find them surprisingly social, happy to be petted and eager to scramble for the grapes Lightbourn gave us to feed them.

We dock back at the water sports’ humble HQ at noon. By 1 p.m., we’ve been transported back to our home base, the amazing Sandals Emerald Bay, and head straight for our favourite spot, the Quiet Pool, for the afternoon.

Here, even the drinks are hushed. Poolside bartender Vanrea Hanna cannot make you a Chi-Chi. Or a Jack Daniels slushie. Or a Rock Lobster. Or a Bushwacker. Or even a frozen margarita. Quiet pool rules – which further promote a heavenly peace among the resort’s already tranquil 500 acres — apply to bartenders too. Here, there are no blenders, and no blender drinks. 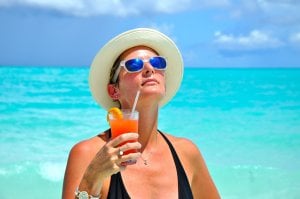 Hallelujah to that. For me and my wife, it was love at first snooze at the Quiet Pool. It’s buffered from the resort’s other two central pools by strategic landscaping that further gives guests privacy. Its dozen vanilla-coloured canvas cabanas offer almost all the privacy you’d need outside your room.

These three-metre-square poolside cabanas are open in the front, and enclosed on the sides and back. Screened, roll-up windows allow the ocean breeze to circulate, with the help of an electric overhead fan. Inside, two loungers gave us a clear view of the muted action in the pool – mostly consisting of couples floating silently beside each other on rubber mats – or poolside comfortable seating for a full day of reading (or writing) in solitude.

The pool opens at 10 a.m. We were there promptly each day to lay claim to a cabana, but never had to jockey for position. 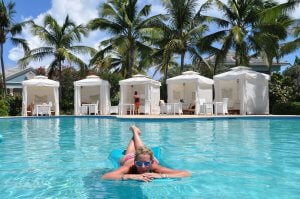 Other features make this Sandals stand out, too. For example, the mile-long, wide white sand beach is inviting for walks at night, and swimming during the day. When we were there, it was never crowded. The beach vista is free from imposing high rises and monster homes. All you see is blue-green ocean. Gorgeous.
And the food is fantastic. Our favourite was a surf and turf dinner we shared at the Barefoot By The Sea beachfront restaurant, with newlyweds we’d met from Idaho. Most lately, this Sandals has opened three new restaurants – Indian, Japanese and sushi — bringing the total number of excellent dining options to 11.

Including return airfare from Toronto with Air Canada Vacations and seven nights in what’s called a Beach House Club Level Oceanview Jr. Suite, the price of this vacation is $7,238 per couple (not including excursions).
Of the resorts I’ve been to, it’s one of the top five, for food, friendliness, class…and of course, at the top of its class for swimming pigs. It’s an unforgettable experience.
– Owen Roberts was a guest of Sandals Emerald Bay, Great Exuma. Follow him on twitter at @theurbancowboy