Many dairy and poultry farmers across Canada breathed a sigh of relief on Saturday night as Andrew Scheer defeated front-runner Maxime Bernier to become the leader of the Official Opposition and the Conservative Party of Canada.

One of Bernier’s main promises during the campaign was to dismantle supply management (SM) — the quota system that ensures a stable income for dairy, egg and poultry farms. Had he won, as pollsters and pundits expected, he’d have been the first leader of a major party to publicly oppose supply management.

On the 13th and final count in the ranked ballot process, Scheer passed Bernier and the 50 percent threshold, winning with 50.95 percent of the head-to-head tally — a difference of 644 out of 33,800 available points.

It’s impossible to break down the ranked ballot data that’s been shared publicly to a granular level, with every riding receiving 100 points to divide among the candidates, but there was likely some chest-puffing coinciding with that deep exhale in dairy circles for once again having influenced a political outcome.

Scheer acknowledged that impact in his press conference on Saturday night.

“You only have to look at the results from Quebec. I believe this was an issue that helped me,” he said, referring to Bernier’s position on supply management.

Bernier was defeated in his home riding of Beauce, with 51.11 percent support going to his rival from Saskatchewan. Dairy farmers in the riding, which Scheer visited twice, figure around 1,500 ballots were cast by dairy producers and their supporters.

While 141,362 ballots were counted nationally, the party has yet to publish data on the number of ballots submitted in each riding or province. People in Quebec’s dairy community are floating numbers between 5,000 and 7,500 referring to how many ballots were mobilized by dairy producers. That’s potentially 3.5-5 percent of the popular vote (not points), without counting the well-organized SM votes in Ontario and the rest of the country. 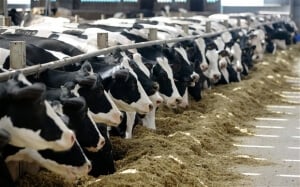 Frederic Marcoux, a dairy farmer in Beauce, was one of the organizers of the pro-SM effort in Quebec.

“We didn’t beat Maxime Bernier by ourself, but the thin margin in the vote made our work significant. He should have been aware of the importance of supply management in the region,” he told Real Agriculture.

“We didn’t just beat Bernier, we sent a message to the complete political class that supply management is not up for debate. I’m pretty sure the Trudeau government saw that too,” said Marcoux.

Bernier supporter and former candidate Kevin O’Leary also told CTV News it was Bernier’s position on supply management that made the difference: “It shows you the power of that issue that remains today in politics. It was a stunner.”

As Scheer’s focus expands outside the Conservative tent, it’s a fair question to wonder how many of these anybody-but-Bernier voters will reward his promise to support supply management or fall to the Liberals in 2019.

And for supply-managed producers and boards who are used to fighting fires to protect the marketing system, the Bernier flame has been dealt with for now, but NAFTA renegotiations with tough-talking President Trump loom.

If the Liberals were to consider compromising on supply management, Scheer’s win won’t make that any easier.

Jeff English, former communications director for Conservative Agriculture Minister Gerry Ritz, joined us on RealAg Radio to discuss Scheer’s win, what it means for CPC going forward and the impact of the supply management vote: