Wet, cool weather is raising concerns about planting delays in Ontario. With these concerns comes the possibility that, when planting resumes, producers will opt to plant soybeans in lieu of what previously would have been corn. This is due to a combination of relatively attractive soybean prices, a looming steep decline in corn profitability, and minimum nitrogen having already been applied.

Current delivery bids for mid-western Ontario come in at $12.37 and $4.87 for soybeans and corn, respectively (at the time of writing). Given corn and soybean input budgets taken from the Ontario Ministry of Agriculture, Food and Rural Affairs’s 2017 Publication 60, both crops show comparable return projections for the coming growing season.

With previously released planting estimations by the USDA’s National Agricultural Statistics Service (NASS) showing record acres of soybeans being sown, consideration for this should already be incorporated into current pricing, thereby mitigating some risk of soybean price decreases due to increased Ontario production. 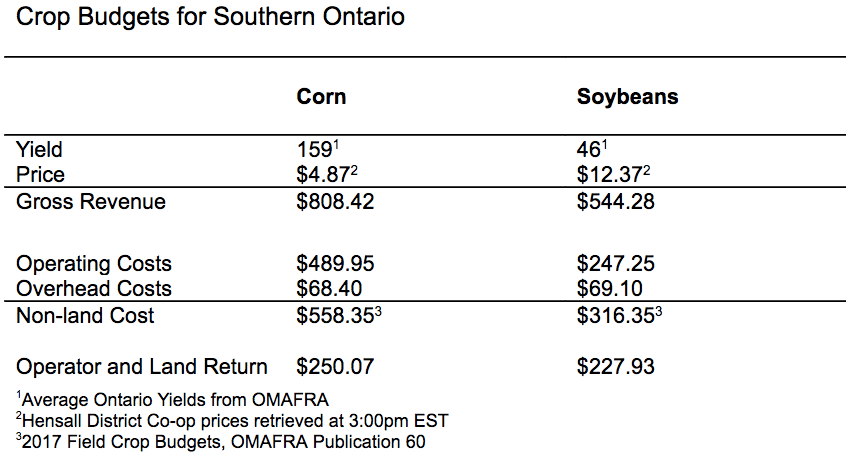 Rainfall of several centimetres over the past two weeks has significantly delayed seeding in parts of the province, raising concerns around the potential corn and soybean yield losses. With May 10th having come and gone, corn yield potential will start to decline approximately 1% per day in May, accelerating to 2% per day if delayed until June.

Estimated soybean yields will likewise begin to decline if planting is further delayed, but at a much more conservative rate. Due to this, we will begin to see corn profitability decline relative to soybean profitability into mid-May and early June. By May 24th, the price of soybeans would need to be only $10.66 to match corn returns based on current prices.

Given that a decline anywhere near this magnitude in soybean prices is exceedingly unlikely, soybeans will become an attractive alternative as wet soil conditions continue to linger. 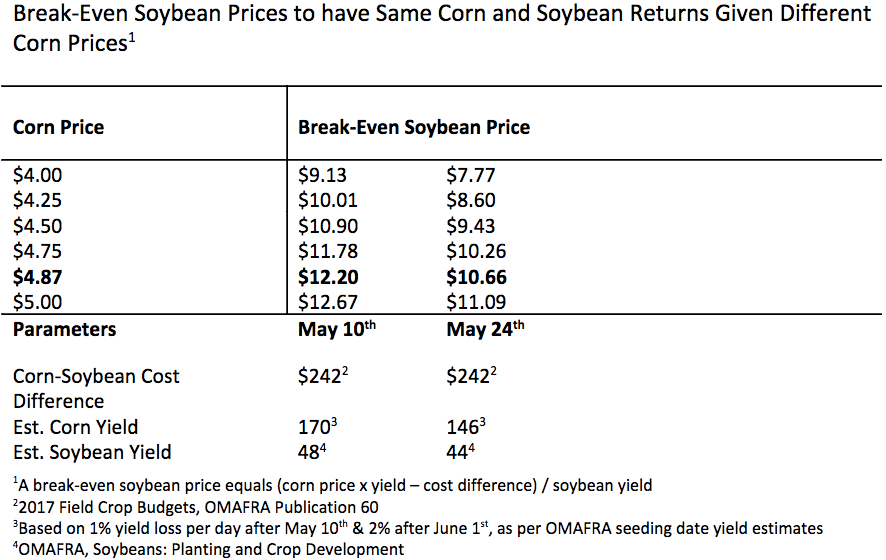 This profitability will be all the more true if producers are behind schedule with nitrogen application.

The decision to convert acreage from corn will be dependent on which pesticides and nitrogen fertilizer are already applied, with certain herbicides eliminating the ability to switch. If this is not the case, then the amount of nitrogen already applied could be a deciding factor, as applied nitrogen is a cost which has been excluded from projections.

If nitrogen has already been applied, the ability of soybeans to benefit will be more modest in comparison to corn, affecting the previously discussed break-even soybean price relative to corn.

Corn School: Got tillers? Tips for next year’s planting season

Who owns all the grain? — This week in the grain market