Grain markets pushed through the middle of May with a little more volatility under its belt as weather conditions and geopolitical risk in Washington, D.C. and Brazil have created some additional uncertainty.

The Canadian loonie gained 1.45% for the week, which should’ve pushed canola lower, but it traded sideways as delayed seeding conditions countered the currency variable. Wheat gained 0.8% as wetness concerns in North America and downgrades of the EU crop won some bulls over. Oats gained 0.75% since last Friday with similar concerns for the 2017 crop, whereas corn improved 0.35% on delayed and replanting concerns. Finally, soybeans took a major hit on Thursday because of Brazilian selling but rebounded on Friday, to only limit the pain on the Chicago futures board of losing 1% in the past week.

Heading into the Canadian May long weekend, parts of Western Canada and U.S. Northern states were hit with sub-zero temperatures which shouldn’t affect the large, large majority of fields since they’ve just barely been planted (or not at all). In the U.S. though, the American farmer continues to plant a lot of grain very quickly, with the last USDA progress report telling us that things are nearly caught up to their 5-year averages. Of course, the above doesn’t necessarily account for the amount of acres that will likely need to get reseeded.

There’s an argument that because of some cooler temperatures over the next two weeks, there’s stronger possibility of the American corn crop pollinating in the 2nd half of July when it’s usually really hot. (While there’s no proven correlation between colder temperatures in May and yield potential, hotter temperatures usually seen in July can have some impact. However, this is entirely speculative at this point and hard to dig into too deeply, but that’s what more people will try to do when there’s a lack of market-moving news.) 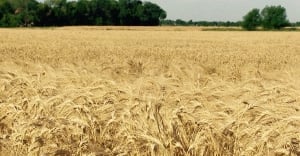 One could argue that there are more bullish fundamentals in wheat than any other crop. Over the next 2 weeks, precipitation events are expected to be in strong supply across U.S. winter wheat growing regions, just at a time when harvest is set to begin. Oklahoma is already taking some crop off and the Wheat Commission there says test weights have been solid — around 63 to 65 pounds per bushel with yields ranging from lows 20 to 40 bushels an acre. Any rain falling on these crops that are ready (or nearly ready) to be combined just won’t turn out well. Also a bit bullish on wheat is news of U.S. wheat getting in on some of the action with the GASC in Egypt, with 115,000 of HRW wheat being bought for a FOB-American port price of $185 USD / MT (or about $6.50 CAD / bushel). However, Egypt also bought from Russia, Ukraine, and Romania, so it’s no clear conclusion that American wheat has any sort of competition edge. What’s clear though is that with lower acres, some wet weather going into Harvest 2017, and potentially more abandoned acres than originally thought, we could trek a bit higher.

Switching over to soybeans, the story this week has been all about Brazil. Earlier in the week, the Brazilian real (their currency) hit a one-month high, pushing domestic grain prices in many areas below their actual cost of production. Entering the week, Brazilian farmers have been slow sellers of their soybeans (which is just sitting in their bins) and with the safrinha corn crop just about ready to get harvested, they’re going to have to make a call of either making soybean sales, selling corn off the combine, and/or piling the corn on the ground. 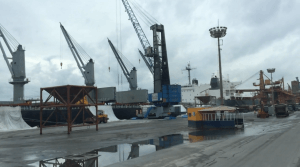 However, late this week, tapes were revealed of the Brazil’s president, Michel Temer (above), allegedly authorizing bribing a witness in a corruption scandal. This sort of political risk will be considered unstable for the country, and therefore, the currency becomes less of a strong asset to hold and investors sell it (Simple rule: uncertainty with the government equates to uncertainty with the currency). With the tapes out, the Brazilian real dropped about 8% to a 6-month low, helping soybean prices climb to a new 3-month high and helping farmers there to unlock their bin doors. It’s already been rumoured that at least 3 million tonnes of soybeans were sold by farmers on Thursday as a result. With this sort of selling, there is likely less interest in buying the next few Panamax vessels from America.

Also bearish for the soybeans complex is the April NOPA crush number which showed just 139.1 million bushels of beans getting used, well below the market’s pre-report expectations of 145.7 million bushels. This is the 3rd straight month that crush has run below what it was a year ago (and the worst miss of the season), putting total year crush volumes at just 0.8% over last year. To hit the USDA’s total year crush forecast of 1.95 billion bushels, crush volumes from May to August must be 4.6% above last year’s usage. While there continues to be buzz of Chinese buying American beans, this crush number, solid planting progress, and poor export inspections capped any bullish action in soybeans yesterday.

Over in Europe, Strategie Grains recently dropped its estimates for wheat and barley production in 2017, citing frosts in France, Germany, and Poland and dryness in Spain, France, Belgium, & the U.K. as the main reasons for the downgrade. The E.U. soft wheat crop was cut by 1.1 million tonnes to 142.7 million, which also meant that European soft wheat exports were cut by 200,000 MT an even 26 million tonnes. The larger cut was seen in the barley crop though, with Strategie dropping it by 1.7 million tonnes to 59.6 million, a multi-year low (but still accounting for about 40% of global production). The corn crop was downgraded by 300,000 MT to 60.1 million tonnes while the European durum crop was felled by 300,000 to 8.6 million tonnes.

Finally, U.S. President Donald Trump officially moved to start renegotiations on the North American Free Trade Agreement, seeking to modernize things by addressing or adding new provisions. For the American, Canadian, and Mexican agricultural industries, the stakes are high. Case in point, U.S. ag exports to Mexico and Canada have gone up 5x and 3x respectively since NAFTA was implemented. With the required 90-day consultation period with Congress/American industry officially started by top U.S. trade negotiator, Rob Lighthizer, the countdown is on until August 16th, 2017 when new tri-lateral talks could begin. The simple translation is that Mexican and Canadian bureaucrats officially have three months to figure out how to limit any pain that Trump and Lighthizer are looking to inflict in changing the 23-year old free trade deal.

Despite temporary dips, the forecast for commodity prices remains positive

Relatively Steady Stuff — This Week in the Grain Markets

It's been nearly two years since the first in a series of five separate announcements were made regarding plans to build or expand canola crush facilities in Saskatchewan, largely in response to low-carbon fuel policies driving demand for canola oil. Announcements are one thing, but actual construction is another. While Ceres Global Ag has since…