The federal government has announced another $4.47 million in funding for the Livestock and Forage Centre of Excellence being built near Saskatoon.

David Lametti, the Parliamentary Secretary to the Minister of Innovation, Science and Economic Development, announced the funding on Friday at the University of Saskatchewan.

Former Agriculture Minister Gerry Ritz and Saskatchewan Ag Minister Lyle Stewart announced $10 million in federal and provincial support for the facility in 2015. The U of S is also contributing the equivalent of $10 million, and the Saskatchewan Cattlemen’s Association is investing $1 million.

“Saskatchewan cattle producers value the applied and discovery research the Livestock and Forage Centre of Excellence will produce. The SCA is proud to support and drive this kind of investment in the future of the cattle industry. There are still great opportunities for others to join in this endeavour to create a legacy to benefit current and future generations of cattle and livestock producers in the province and across Canada,” noted Ryan Beierbach, chair of the Saskatchewan Cattlemen’s Association.

The centre is slated to be completed in 2018. 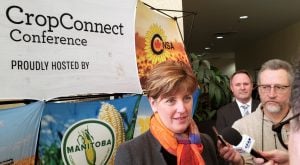 The federal agriculture minister isn't ruling out the introduction of additional measures aimed at softening the financial impact of the federal carbon tax on farmers across the country. Minister Marie-Claude Bibeau has repeatedly said she's looking for more data outlining how the carbon tax is affecting farm profitability. Depending on those numbers, she told reporters…Read more »

4 Common Ag Myths and How to Dispel Them