For farmers with plenty of help, it’s the eyes and ears of others around the farm that help with spotting, moving, or monitoring equipment.

For farmers like Jim Hale, from Lancer, Sask., cameras installed on some of his machinery have replaced some of that help.

A cereal, pulse, and oilseed farmer, Hale runs his farm operation on his own, for the most part. 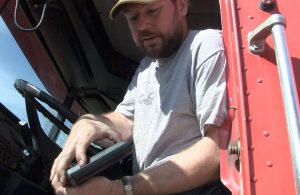 To ensure he doesn’t have to waste time getting in and out of machinery, he has installed cameras in his drill tanks and on augers so he can see what’s going on without having the leaving the cab of his trucks and tractors.

“I like to use video cameras to give me an extra set of eyes where I might need somebody else instead,” says Hale. “So anywhere I can put one where I can replace a person with, generally gives me some efficiency.”

Hale adds that he often finds inspiration for new ideas online and on social media.

“I’ve had cameras in various applications for probably three or four years now. Every now and then I think of a new use for one,” he says.

As part of this season of the TechTour video series, brought to you by Dow AgroSciences and Real Agriculture, we’re focusing on on-farm innovations that have made farmers more efficient. Check out our latest feature as Kara Oosterhuis visits Hale’s farm:

Win a Meridian auger in the TechTour Contest!

Together with Dow AgroSciences and Meridian Manufacturing, we’re giving away a Meridian HD 10-46 Auger. The contest closes July 20, 2017.

TechTour: Two Pieces of Equipment in One — The Neeralta Grain Bagger

TechTour: Finding the Right Precision Ag Set Up for Your Farm