Grain markets pushed through the second week of May with a little more volatility, but not from weather effects, rather, new data.

However, the markets ended the week mostly lower as corn was the only winner, up 0.15% since last Friday thanks to ethanol gaining 1% & the usual planting premium. Conversely, soybeans lost 1% while wheat was down 2.05% and oats lost 3.5% (but was flip-flopping all week long). Hitting the halfway mark of what some argue to be the most important month of the entire global crop cycle, it’s clear that there’s still a lot of grain today, but what about a year from now?

It starts with getting the crop in the ground and with some decent weather, there’s a lot of diesel smoke out in the middle of fields. Helping getting the crop in are warmer temperatures in the 10-day forecast across the Midwest. This in mind, traders are expecting Monday’s USDA crop progress report to show 70% of the U.S. corn crop to be planted (matching the 5-year average). As such, there’s more than a few analysts who are becoming more bearish on further corn price rallies. The only real catalysts are if (1) managed money starts to believe there’s a threat to yield potential or (2) we see a significant amount of replanting in Cornbelt, replacing wet corn fields with soybeans and shuffling the acreage makeup in general.

The USDA gave out its first supply and demand forecast for the 2017/18 crop this week and it surprised the market in a few areas. A simple look at the numbers shows less corn globally and in the U.S., less soybeans worldwide but significantly more within American borders, and way less wheat in the U.S. but more of the cereal worldwide. What we do know is that for the first time nearly 30 years, global production of corn, soybeans, and wheat will be declining simultaneously.

Digging into the report, the first estimates of American corn and soybean yields this year were pegged by the USDA at 170.7 and 48 bu/ac respectively. This would be a drop of 3.9 bushels and 4.1 bushels from their respective records last year of 174.6 and 52.1 bu/ac (also worth noting is that these first estimates are both above the linear trend yield). Based on historical abandonment averages, the U.S.D.A. expects 82.4 million of the 90 million acres planted to get harvested, meaning production of 357 million tonnes (14.07 billion bushels).

For soybeans, U.S. production will hit 115.8 million tonnes (4.26 billion bushels) off of 88.6 million acres versus the 89.5 million that should get seeded this spring. Domestic crush and exports are both expected to increase in 2017/18 from this year by 25 and 50 million bushels respectively. However, the size of the crop, combined with international competition means U.S. soybean carryout for 2017/18 will hit 480 million bushels (or +10.3% year-over-year to 13.08 million tonnes).

The biggest domestic bullish surprise in wheat where production is expected to drop 21% from 2016 to 49.6 million tonnes (or 1.82 billion bushels), using a 47.2 bu/ac average yield (last year was 52.6) off of 38.5 million acres (compared to the seeded area of 46.1 million). U.S. spring and durum wheat production should decline 10% from last year, thanks to the aforementioned lower yields and lower acreage. Overall, the lower production numbers will see 24.86 million tonnes (or 914 million bushels) of wheat still available in the U.S. by the end of 2017/18, a 21% drop year-over-year. This, despite, total U.S. demand dropping 2.2% year-over-year.

Globally, 2017/18 corn output should hit 1.033 billion tonnes (slightly lower from 2016/17), which, combined with a little more demand, equates to a carryout of just 195.3 million tonnes (or -31% year-over-year. This is mainly due though to the USDA’s expectations of Chinese inventories dropping significantly this year as higher consumption but lower acres means less production to shore up supplies again! More specifically, they’re expecting the People’s Republic to end 2017/18 with 81.3 million tonnes, which would still account for 42% of total world supplies, but it would still be 20 million tonnes lower than the end of 2016/17 and the lowest in the past 5 years!

For soybeans, total global production in 2017/18 is expected to be just 3.5 million tonnes smaller than 2016/17 at 344.7 million. However, strong demand – namely the USDA saying that China will import 93 million tonnes in 2017/18 – will push ending stocks down slightly from the 90.14 million tonnes ending 2016/17 this year to 88.8 million by the end of 2017/18. While America, Brazil, and Argentina will continue to be the major production players this year, China will continue to be the wildcard on the other side of the table. 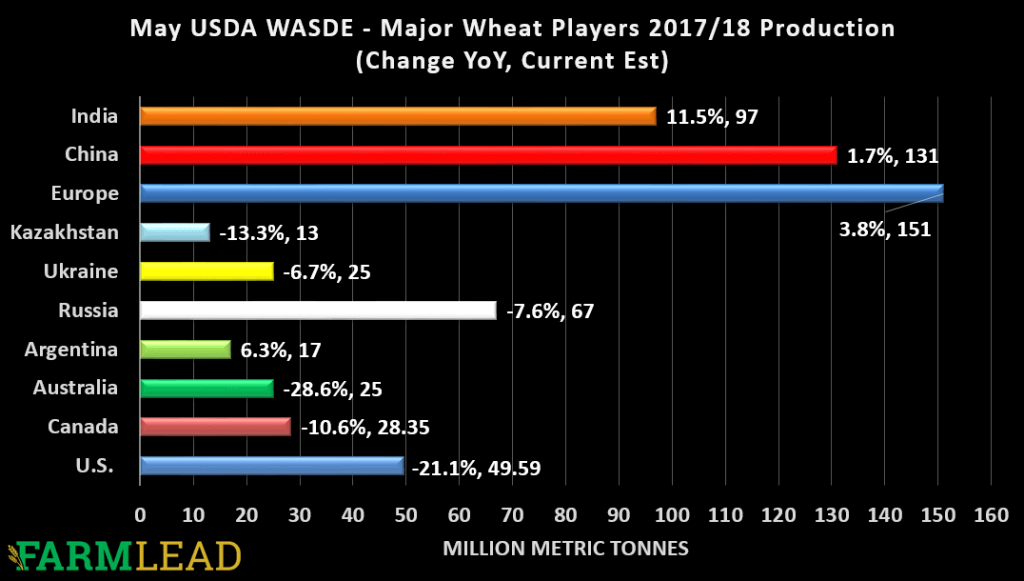 For wheat, global production should drop about 15 million tonnes from 2016/17 to 2017/18 at 737.8 million tonnes, but with demand relatively stagnant due to competition with corn and other feedstuffs, new crop global carryout is pegged 3 million tonnes higher than 2016/17 at 258.3 million tonnes (another new bearish record). However, much like the corn market, China owns more than 50% of those supplies so if you were to remove them from the table, the global stocks-to-use ratio would the lowest in the past decade!

A couple numbers worth pointing out include Canadian and Australian wheat production dropping 10.5% and 28.5% respectively year-over-year to 28.35 million and 25 milloin tonnes each. Wheat production is also expected to fall in the Black Sea countries, down 7% to a combined 121 million tonnes of production but EU production is expected to climb 4% from last year to 151 million tonnes. Also of note is that the USDA is forecasting global barley supplies to fall to 17.5 million tonnes, a drop of nearly 30% from the expected end of 2016/17 and the lowest in more than 30 years.

Switching gears, the Buenos Aires Grain Exchange raised its soybeans harvest estimate for the country to 57.5 million tonnes (slightly ahead of the USDA’s 57 million-tonne call this week), thanks to an upgrade in the national yield average to a new record of 47.4 bu/ac, 0.3 bushel ahead of the previous record set 2 years ago. While we heard from many that a crop disaster was likely, we continued to ignore the noise to sell on these rumours and accordingly profit on the fact. Next door in Brazil, CONAB raised their estimate of the soybean crop there to 113 million tonnes and the corn crop to 92.8 million tonnes, which varies quite a bit from the U.S.D.A.’s call of 111.6 million and 96 million tonnes respectively.

However, AgResource points out that CONAB has a history of underestimating the corn crop in May though, as 7 out of the last 10 years, they’ve eventually raised the crop by 4.5%, meaning that we could see a 97 million-tonne handle from CONAB when all is said and done.

Similarly, the American Farm Bureau points out that in the past 10 years, the USDA tends to grossly overestimate soybeans ending stocks. This has mainly been blamed on underestimating China’s appetite for beans over the past decade, which means their price expectations have been 10% lower than what actual average price turns out to be.What we do know though is, South American farmers have been slow sellers of their soybeans, meaning demand could wane for U.S. supply as the season treks on (and the grower has to sell eventually!).

Given the time of year, there’s a lot of different factors moving simultaneously: this week’s WASDE, plant 2017 (and the dreaded replant 2017), and, more broadly, weather. Overall, the USDA’s numbers are the first suggestions and we know they’re going to change so while the playing field might’ve changed, the rules of the game haven’t. As such, weather will become the biggest factor again for the next 4-5 weeks and I think we could see a little more premium priced in, but will we see the top prices of the growing season within that time frame

If history is an example, the crop won’t be known tomorrow but the market doesn’t seem to price in by mid-June what is likely to get produced and while it’s not a final answer in terms of total output, it does allow one to take advantage of those growing season gains.

Dairy Farmers of Ontario is warning producers that milk dumping, in rotation, may occur in the coming weeks, as the industry adjusts to the new demand curves during COVID-19 and the social distancing it requires. Several provinces, Ontario included, saw a large spike in demand at the onset of the virus-induced isolation period. However, the…Read more »