Grain markets started losing some of their lustre this week as favourable weather didn’t turn out to be so helpful for the bulls. Going into the last week of the quarter and the month, we’re about to get some major reports that the market is preparing for. On Thursday, June 29th, we’ll get Statistics Canada acreage estimates and then the following day, on Friday, June 30th, the USDA is coming out with their stocks and acreage report. With these reports coming down the pipe, farmers, grain buyers, and speculators (hedge funds) are all hoping that they’re not the one holding wrong hand as to which way the market will move.

For the StatsCan report, a Reuters pre-report survey of market analysts suggest that 22.2 million acres of canola will get seeded this year. This would be up 9% from last year’s area but actually down almost 1% from StatsCan’s first estimate back in April. While there’s lots of ranting and raving about the amount of acres that probably didn’t get in, I would suggest that the maximum amount of area that went unseeded is probably 400,000–500,000 acres, meaning more than 21 million acres still got planted. All-wheat acreage is suggested to come in at 22.7 million acres, or down about 2% from last year, but the smallest area in 6 years.

For the U.S. stocks and acreage report, most market participants are expecting to see a lower corn number because of the wet weather the eastern cornbelt had. Conversely, there are some suggestions that you could see more soybean acreage, which helps rationale why soybeans dropped this week.

Advisory firm Stewart-Peterson continues to be the most bullish of the grains complex, saying there’s a 70% chance that beans get back above $12 USD / bushel on the Chicago Board sometime this year. I won’t discount a possibility, but I’d put that $12 probability right now at roughly 25%. We have seen an increase in acreage all around the world (namely, Brazil, USA, and Canada.) This uptick in planting suggests global record production, and thus record global carryout.

There’s optimism that China could top the 2012 record of 13.4 million tonnes bought in this year’s annual American bean-buying tour in Iowa. The uptick would be welcome at a time that China imports have been slowing due to negative crush margins. The reality though is that China can’t buy everything planted in the ground. What we do know is that the lack of farmer selling by farmers in Brazil and Argentina has provided some old crop sale opportunities for North American producers. 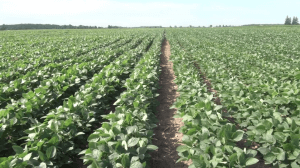 On that note, there are three major factors pressuring soybean values right now. First, the size of the South American crop has been swaying buyers to those markets for supply. In Brazil, the nation’s weakened currency has helped growers attract foreign buyers. Second, conditions are still relatively benign for the 2017/18 North American crop. This means that international buyers may be waiting for lower prices (if they’re not happy with the supply mentioned above from South America). And finally, American farmers have also been slow sellers of newer crop. It seems that most memories are just short enough to remember that many priced in new crop sales a bit too early last year and missed the rally.

Switching over in corn, prices have faced pressure due to better growing conditions and the accelerating U.S. winter wheat harvest. Like soybeans, U.S. new crop corn sales are down compared to last year, with only 2.87 million tonnes sold thus far. This figure represents a 36% decline compared to the 4.5 million tonnes sold at this time in 2016.

Aggravating the slow new crop sales pace is that both Brazil and Argentina corn prices at their respective ports are much cheaper than American options. Not just for immediate movement but all the way through into October. Adding fuel on the fire is the Argentinian Ag Ministry raising its corn area expectations for the 2017/18 crop to a record 19.6 million acres. They also upgraded this year’s 2016/17 crop by 1 million tonnes to 47.5 million tonnes.

The downturn in corn prices has many analysts concerned. Ted Seifried from Zaner Ag Hedge Group is asking if there’s any hope left for a rally in the corn market. Seifried doesn’t say it outright, but I think he is betting that it does when he wrote that “the majority of what I have seen and heard about is less than ideal.”

I agree with Brad Matthews from Roach Ag that we are unlikely to see a final average yield of 171 bu/acre that the USDA is currently forecasting. However, I don’t think the number will be that much lower. I’d project the figure to come in maybe one or two bushels fewer. I also expect that the corn market will see one more pop this summer due to weather conditions. The market has likely priced in some of this lower yield, but one more shock to the upside is likely when all is said and done.

As such, weather through the end of June doesn’t seem to be too threatening to crops. However, the premiums still left in the market have more to do with the yield potential that is unrecoverable. Drought-like conditions will likely maintain an impact on Northern Plains areas, making the next few weeks pretty important regarding crop development.

After spending two days in Regina, SK this week at the 40th Canada Farm Progress Show, it seemed everyone was asking the same questions: where is the rain? and how is it going to affect prices? With the North American durum wheat crop in limbo, we expect more upside for this cereal than spring or winter wheat. One key factor drives this sentiment: there is a much smaller pool of durum wheat produced both in North America and abroad compared to the total production haul of spring and winter wheat.

Overall though, the market is feeling a bit top-heavy and that’s why you saw some pullback this week on the futures boards. Growing conditions are relatively decent everywhere in the world except for the driest areas of the Northern Plains and southern areas of Western Canada. As mentioned, we’re cognizant of the opportunities for one more pop potentially but this, per usual at this time of year, will depend on the heavy hand that Mother Nature is holding.

Growing On Up — This Week in Markets

Politics lure prices higher — this week in the grain markets