Grain markets entered the month of June all in the red under some varying opinions of what the crop potential is looking like in the Northern Hemisphere. Canola ended up being the biggest loser of the week, down 3.25% as planting pace picked up in Western Canada. Chicago wheat was the 2nd-worst performer for the week, down 2.1% as the U.S. winter wheat harvest gears up. Corn lost 0.6% on some better weather conditions, while oats was the only crop able to squeak out in the green, up 0.1% for the week. Overall, the market is finding a home between grain buyers hoping for lower prices on some benign growing conditions in the coming weeks and farmers hoping for better prices on the late/wet start to the growing season.

Strategie Grains’s monthly estimate of the EU, rapeseed crop sits at 21.35 million tonnes (or about 5% above last year’s production), with output forecasts lowered in Germany (5 million tonnes), maintained in France (4.6 million tonnes), and raised in Poland, Romania, the U.K., and Hungary. AccuWeather says though that there’s some hot and dry weather developing across Poland, Ukraine, Belarus, and other Baltic states, which is something we’ll have to keep a close eye on, especially on Ukraine, who is the world’s #4 exporter of corn and #6 exporter of wheat! 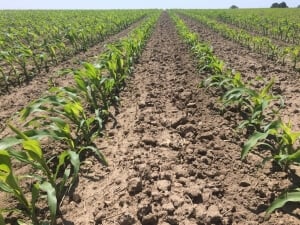 Looking at the history of U.S. corn crop ratings, there have been 9 times in the last 20 years that the first corn rating came in below 70% considered good-to-excellent and 5 of those 9 years produced above-trend yields. More acutely, the data tell us that there’s one story showing a strong chance of a good crop, but the bullish camp continues to trumpet a tale that the market isn’t pricing things in properly.

Accordingly, you have to ask the question if trendline yields are going to be hit this year, especially for the corn and wheat markets. Some would argue that wherever isn’t flooded out though (or has had to be replanted or will go into Prevent Plant acres), yield potential is still certainly there. Some rain is expected to hit the eastern Cornbelt again this weekend with some cooler temperatures next week whereas the western half will get some hot temperatures through next weekend.

Looking more long-term, the NOAA is expecting more average conditions through the rest of June and July before things start to get a little warmer in August, albeit they do note that it’s cooler than the forecast they issued for the same time period last year. The hotter temperatures could have an impact on soybeans that are pod-setting but if it’s anything like last year, there could be a bearish surprise, and accordingly, those in the party that are betting on $8 USD / bushel beans is starting their party.

Overall, it’s been diverging games being played in the oilseed and the spring wheat markets as the former has pulled back significantly in the past couple of weeks whereas spring wheat prices have ticked up nicely. For wheat, we’re also cognizant of quality and yield potential for the U.S. winter wheat crop, as well in Ukraine where dry weather hasn’t helped. There are obvious planting concerns in Western Canada of the spring crop but there is a stretch of land reaching from NW Saskatchewan down to northern Iowa where things are getting fairly dry and if it wasn’t for some abundant moisture in the fall, we’d be in a much worse-off spot for crop development. 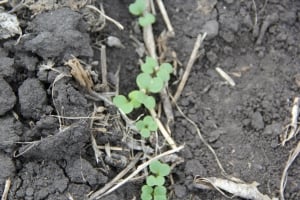 While we’ve already talked about canola dropping this week (although basis has improved a bit), soybeans dropped this week on both technical and fundamental factors. There continue to be higher expectations of more soybean acres and Chinese demand potentially starting to slow down. More specifically, China’s soybean crush margins are the worst since September 2014, losing almost $52 USD / MT!.

Arguably, this has been one of the wettest springs in a lot of places, but the market hasn’t been able to price this in. Some consider that market participants refuse to be fooled like they were last year when we saw premium get built up and then washed away in the 2nd half of June. Conversely, one could argue that the market is believing the old adage that “rain makes grain” just a little too strongly. It’s always important to keep things in perspective though as what you see through your front window or on a video of someone wakeboarding in a field shouldn’t be construed as consistent across all acres. Newsworthy stories tend to be more fiction than fact these days, so don’t let the headlines sway your perspective to just what you’re hoping to hear.