From the road, it looks like a custom-made air seeder pulled by a Big Bud four-wheel drive tractor.

But after your eyes move on from the rare tractor, you might notice something else.

Those look like planter row units mounted on the frame.

Having grown corn and soybeans in the southwest corner of Manitoba near Waskada for 15 years, Frank Prince says they felt they could improve on the planter options available on the market.

Together with his brother Bill, he has designed and built a 60-foot seeding unit that combines the precision of a planter with the versatility of an air seeder in terms of one-pass seeding and good trash/rock flow.

“It really tries to checkmark a lot of boxes,” he says in this latest episode in the TechTour video series. “Are there a few drawbacks? Probably, but I think there are a lot more pluses than what is currently offered.” 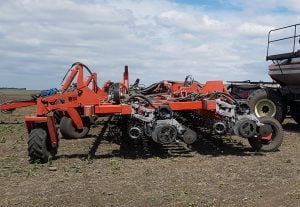 As he explains in the video, they hired Sorensen Welding in Mahnomen, Minnesota to build the heavy frame. The front bar can be set up to band fertilizer between the seed rows. It’s followed by two rows of planter units, where they’ve mounted LaserPro row units from Harvest International on twin-row 20-inch spacing. Each row is equipped with Precision Planting meters.

“For corn and soybeans it has the SpeedTube so we can travel up to 10 miles an hour,” says Prince. “We’ve been doing 7 and it’s been working perfectly. Some of our crops are up and they look perfectly spaced.”

The current version of the cart features a 3,000 gallon liquid tank and 275 bushel dry tank sitting on Elmer’s Transfer Tracks. Prince says he plans to expand the tank to 400 bushels to cover more acres on each fill. In corn, they also ran a tow-between liquid caddy for 28-0-0 between the seed rows.

“The biggest thing is its versatility, especially for Western Canada. If you want to put fertilizer on, you can, and also the ability for trash flow and ease of use,” he says.

As soybeans and corn acres expand, and with farmers looking to save on seed costs with more precise seed placement, Prince believes this design is the way forward for seeding technology on the prairies.

And based on the interest he’s received, he’s planning to begin building and selling planters based on this design.

Check out the video above for more on Frank Prince’s planter (and the Big Bud pulling it).

My Winter Wheat is Written Off — Now What?

Wheat Pete’s Word, Sept 28: Holy Peter, where did that yield come from?!

The host of Wheat Pete's Word has a jam packed episode for you today, as always! Peter "Wheat Pete" Johnson covers some quick updates from growers in the Maritimes, as they deal with the aftermath of Hurricane Fiona. As well, he's hopeful that he's going to win (win what, we're not sure), as yields are…