Wheat was on fire. Everything else traded pretty much sideways. For the week, Minneapolis wheat gained over 15%, or more than $1 USD/bushel. More impressive was the 34% gain for the month of June, or the 40% improvement since April 1st (the start of the calendar quarter). The Kansas City hard red winter wheat market wasn’t far behind, up nearly 12% for the week, and almost 18% for both the month of June and 2018. Should we just wait and watch the wheat market?

Chicago soft red winter wheat is up 25% for the quarter, competing for 2nd place behind hard red spring wheat with oats (it was up 25.2% in 2Q2017). For the month of June, Chicago wheat is up 22.4% while oats has gained 17.5%. There hasn’t been that much spillover into corn or other members of complex though. More specifically, corn only gained 4% for the week. For the quarter, corn has gained 6.3%, and only 3.5% for the month of June. Soybeans technically ended the quarter almost 2% lower than where we started it. For all of June, soybeans gained 3.5%, which was mainly helped by it gaining 4% just this week.

Old crop canola posted some solid gains on Friday, gaining more than $21 CAD/MT on the Winnipeg ICE futures board. This means for the week, front month canola was up 8.2%. For new crop canola, over $13/MT improvements were made on Friday, helping the November contract gain more than 5% for the week to nearly finish at $500 CAD/MT. For the month though, canola is up 9.7% and 13.2% since the start of April. 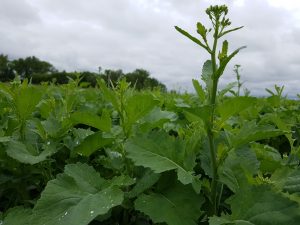 On Thursday, Statistics Canada came out with their acreage estimates for the 2017/18 Canadian crop. The number most market participants were watching is canola. According to StatsCan, their survey of farmers suggests 22.8 million acres got planted this spring by Canadian farmers. This would be a 12.1% increase over last year’s 20.4 million acres, a new record, and above the market’s expectation of 22.2 million acres. Next on the most-watched list was wheat area, which StatsCan will top out at 22.4 million this year, down about 3.7% from last year & below the 22.7 million the market was forecasting. This will be the first time ever that canola acres in Canada top wheat’s area.

Barley acreage came in at 5.77 million, down 9.7% from last year and down from the 6 million that the market was expecting. One could argue that that barley acreage loss went into oats as 3.22 million acres of the cereal is getting planted in Canada this year, up 13.6% over last year (market was expecting 3.4 million though). Fall rye is falling back to more normalized levels with 260,000 acres getting planted. That’s a 21% decline from last year’s large crop but does mirror the 259,000 acres seeded in 2015. 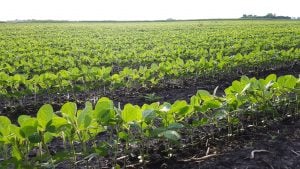 Soybeans continue to be the big surprise in Canada as even though the market was expecting to see 7 million acres (which would’ve been a 28% increase from last year), the actual number came in at 7.3 million, a 33% jump!

As for the pulses, the numbers came in generally as expected. We knew lentil acreage was going to drop from last year’s record. StatsCan met the market’s expectation with 4.4 million acres getting seeding this year, down about 25% year-over-year. 4.1 million acres was sown to peas this year in Canada, slightly above the market’s 4 million-acre pre-report forecast but still a 3.4% drop from last year. Chickpea acreage continues to roller coaster, coming in at 135,000 this year in Canada, down nearly 16% from last year’s 160,000 but still above the 115,000 acres seeded in 2015.

Of course, we know people will say “oh no way that XX million acres of (enter crop name) got seeded this year.” It was either too wet or too dry. While we can challenge these numbers as much as they want, they do set the playing field for where price direction heads the next few weeks. 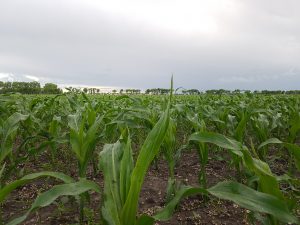 Then on Friday, the USDA said farmers planted far more corn than analysts had expected. In fact, almost 1 million acres more than the average estimate from analysts. At 90.9 million acres seeded, it’s not much above the March estimate but it was enough to push corn prices into the red to end the week.

For soybeans, the USDA is calling for 89.5 million acres, the same as March and below market pre-report expectations. This is the 3rd most volatile report usually for soybeans, with an average sway of 22¢ USD / bushel. As such, we did see the bean market kick higher by about 20¢ once the report was released (see total gains for the week at the beginning of the column).

In wheat, USDA revised its numbers lower, adding to the growing lists of what’s pushing the cereal higher (the others being the aforementioned lower Canadian wheat acres and the fact that 90% of the Dakotas are considered to be in severe or extreme drought conditions). The report said that U.S. farmers planted 45.65 million acres of total wheat, down about 400,000 acres from its previous estimate. It is almost 5 million acres or 9% less than last year’s area. It is also the lowest total area planted to wheat in America since 1919 when record-keeping began! Breaking the categories, winter wheat acreage is down 9% year-over-year to 32.8 million (23.8 million of hard red winter, 5.6 million of soft red winter, and 3.42 million of white winter wheat).

U.S. spring wheat acreage is pegged 6% lower year-over-year by the USDA to 10.9 million. For durum wheat, we are seeing a 20% decline in acreage compared to 2016, with just 1.92 million acres getting seeded. The combination of spring and durum wheat was well below expectations. Combined, we saw the two fall short of pre-report estimates by roughly 390,000 acres. That’s about a 3% miss.

The USDA also released its grain stocks report, showcasing how much grain was left in the American pipeline as of June 1st. Most people were fairly bearish on these numbers going into the report as corn, wheat, and soybeans were all expected to show bigger supplies. There was 5.225 billion bushels of corn still as of June 1st, which was above market expectations by almost 100 million bushels. Those supplies are also 11% higher than a year ago.

For soybeans, the 963 milllion bushels still in the pipeline was 20 million below what the market was expecting. Still, that quantity is more than 10% larger than the U.S. soybean supplies as of June 1, 2016. For wheat, the market’s expectations were about 50 million bushels too low, as the USDA says there was still 1.184 billion bushels out there at the beginning of June. This amount would still be 21% than a year ago.

So, we saw a pretty solid week (and month!) of gains across the wheat and canola markets. ‘Lock the bin doors’ is a common thought that comes to mind obviously. Two weeks ago, we correctly called to lock said bin doors on good-quality wheat sales until weather through the end of June was known. The rocket ship that wheat has been on does have to land at some time though. Given some of the conditions elsewhere in the world, combined with the amount of supply available in both North America and globally, we’re getting more cognizant of tops. I’ve been happy to wait and watch the rocket’s launch. If you’ve watched any space movies, you know that things just get more complicated once said rocket is in space.

Planting Begins and, With It, Volatility: The Markets This Week

Markets ignore kicking the can – This week in the grain markets