Built from the late 70s through the mid 90s, there are still more than a few of the original Concord drills in operation in Western Canada and the Northern U.S.

Around 6,000 Concord drills were built, with around 2,000 sold in Canada, but the name disappeared on new seeding equipment after Concord Inc. was bought by Case in 1996.

Brothers Howard and Brian Dahl of Fargo, ND started Amity Technology after selling Concord to Case. They re-entered the air seeder business in 2007, and Amity has since produced drills based on the Concord concept through an agreement with AGCO and its Sunflower equipment line, however the Amity drill unveiled in Regina is an entirely new model and the first to feature the Concord name. 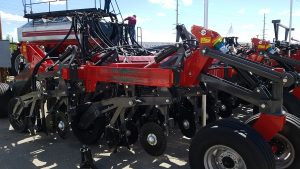 As Howard Dahl explains in the video below, they reintroduced a drill almost identical to the Concord design in Regina several years ago.

“Everybody five, six years ago said ‘what’s different? Give me a reason to buy a new one,’ and so we asked what they’re looking for, and they said they’d like a little better precision depth control, so we’ve basically taken the Concord design and put independent hydraulic cylinder on every shank,” he says.

The independent shanks enable a faster seeding speed of eight miles per hour, which Dahl notes makes a 50 foot unit as productive as an 80 foot unit at five miles an hour. A new frame was designed to accompany the new shank design. Beyond that, the Concord Legacy has many of the same features as earlier Concord designs — the pneumatic packers, a variety of openers, and the disc leveler, he explains.

He says they plan to build a limited number of 50 and 60 foot units for commercial use for next spring.

We discussed the Concord drill’s history, what’s changed with the new Concord Legacy precision shank drill, and where Dahl sees seeding technology moving in the future:

Don’t fall asleep at the switch on pricing wheat

Wheat markets tend to err on the side of boring, as its one crop that is grown in essentially every region of the world. That said, ignoring what's ahead for the market could leave real dollars on the table if growers aren't paying attention to market moves. Neil Townsend, of FarmLink Marketing Solutions and GrainFox,…