Grain prices over the first two weeks of July are still swinging a bit wildly as the market is trying to price in the recent heat.

Scorching temperatures hit most of North America before the USDA came out with their July WASDE report on July 12th, 2017. The report was met with some bearish skepticism, although the USDA used data collected before July 1st (aka before most of the heat really hit). While speculators may been cooling their jets on the buying, the hot weather isn’t. Net-net, while prices have all pulled back from their highs last week, we don’t think the cooling off period is final.

For the week, the Canadian Loonie gained 1.85% to cross 1-year highs above 78.5 cents USD. This put pressures on canola, which fell 0.4% for the week, despite the November contract having a trading range of nearly $40 CAD / MT! Oats also had a wide trading range, but only finished up 1.4% for the week. Soybeans fell 1.1% from last Friday, corn dropped nearly 4% this week, and Chicago wheat was down 4.15%. For Kansas City hard red winter wheat, the September contract lost 7.5% over the course of the week. On the Minneapolis grain exchange, spring wheat values on the September contract lost 4.2% for the week. Conversely, on the FarmLead, North America’s Grain Marketplace, we’ve continue to see cash durum wheat values rise, with $10 CAD / bushel and higher regularly trading for #3 and better quality.

The hot topic heading into this month’s WASDE report was indeed wheat. The U.S. spring wheat yield was pegged at 40.3 bu/ac by the USDA, down 14.6% from last year’s 47.2 bu/ac. Further yield downgrades are likely expected by the market though as U.S spring wheat crop ratings are the worst in nearly 30 years. This means that total hard red spring wheat production in the U.S. will come in at 385 million bushels (or 10.48 million tonnes), down almost 22% from last year’s crop. The market was expecting around 409–416 million bushels ahead of the report. With American HRS wheat ending stocks pegged at 122 million bushels (or 3.32 million tonnes) by the end of 2017/18, this is nearly half the supply that the 2016/17 crop year will end with.

For durum, American production is pegged at just 57 million bushels (or 1.55 million tonnes), a 45% drop in output year-over-year. Perhaps take it with a grain of salt though as last year’s production figure was one of the best in terms of both yields and quality. Moving on, U.S. durum ending stocks from 2016/17 to 2017/18 are expected to fall by 28% to 26M bushels (or just 707,600 MT). Aggregately, total U.S. winter wheat production of 1.28B bushels is down 23% from last year, but actually up 2% from the June forecast. 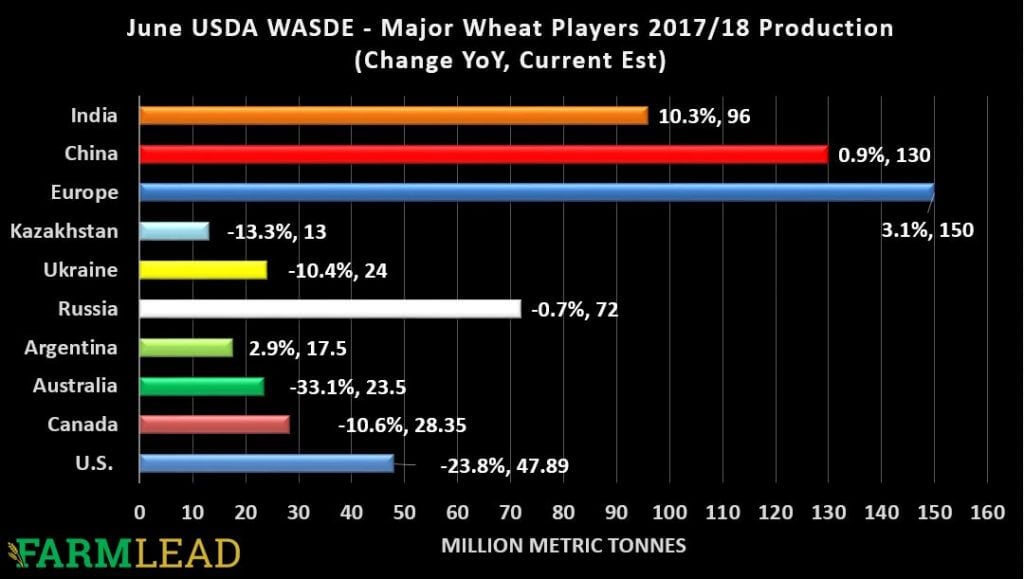 Canadian wheat numbers were left untouched at 28.35 million tonnes of production, 22 million tonnes of exports, and a carryout of 5.16 million tonnes in 2017/18. Compared to last year, this would mean that production is down 10.5%, exports are up 10%, and ending stocks are 28% lower! This week’s crop report from Saskatchewan and Alberta showed that all crop conditions are below their 5-year averages. More specifically, 68% of the Saskatchewan spring wheat crop is considered to be in good-to-excellent (G/E) while its just 73% in Alberta. Just 43% of the Saskatchewan durum wheat crop is rated G/E while that number is 62% in Alberta.

In Australia, persistent dry weather forced the USDA to drop its estimate by 1.5 million to a 23.5 million-tonne harvest in 2017/18. I won’t compare it to last year’s crop because it was a monster but the forecast, if realized, would be nearly 3% lower than the 24.2 million tonnes produced 2 years ago. That year, the Aussies exported 16.1 million tonnes of wheat. 2 years later in 2017/18, the USDA is estimating they’ll ship out 19 million tonnes. European Union wheat production was felled by 800,000 MT from last month for a 150M-tonne crop. This is mainly due to smaller production in Spain and France. European exports were also dropped by 500,000 to an even 30 million tonnes.

Of note is persistent rains have helped downgrade the quality of the crop there. Protein levels for German wheat typically comes in between 12 and 14%, making it competition for North American spring wheat markets. With the size of the North American crop output indeed lower this year, this could potentially be considered a bullish factor. We have to be cautious though. These sorts of headlines can be more smoke than fire. I’m taking the rains with a grain of salt, but I remain cognizant that it could add some premium to the market.

Moving east, the USDA acknowledged some drier conditions in Ukraine, dropping their wheat crop by a million to 24 million tonnes. They also dropped Ukrainian wheat exports by 500,000. Next door though, Mother Russia is more than making up for this as the USDA acknowledged that crop conditions in Russia are similar to last year, Thus, wheat production was raised by 3 million tonnes to 72 million. Exports were raised by 1.5 million tonnes to 30.5 million for 2017/18! This would make Russia the king of global wheat exporters again after losing its crown last year to America (albeit by less than 1 million tonnes). Overall, total global wheat production in 2017/18 is forecasted at 737.83 million tonnes. This would be more than 2% lower than last year’s record crop but very like the 737 million tonnes produced in 2015/16. Worth noting though is that global inventories continue to grow, up 1% year-over-year to 260.6M tonnes.

For American corn and soybean production, yields went unchanged at 170.7 and 48 bushels per acre respectively. With the updated planted acreage for corn of 90.9 million acres, total U.S. production of the coarse grain was raised by nearly 200 million bushels from June’s estimate to 14.255 billion bushels of total output this month (or 362.1 million tonnes). The additional production was not offset by demand though. Feed and residual use climbed by 50 million bushels from last month. Exports and ethanol use were left unchanged. The more interesting number I continue to watch is exports. With 1.875 billion bushels forecasted by the USDA, this would be almost a 16% decline from the 2.225 billion bushels expected to land on the books for 2016/17.

Overall, the higher production and lack of corresponding rise in demand pushes the domestic American corn ending sticks higher. 2016/17 corn carryout was raised by 80 million bushels to 2.37 billion bushels (meaning the 2017/18 crop year also starts with 80 million more bushels). With that extra supply added to the extra production that the market wasn’t really pricing in before the report, 2017/18 ending stocks are pegged at 2.32 billion bushels. Last month the estimate was 2.11 billion and before the report, the market was pricing in something closer to 2.18 billion, hence why corn has pulled back this week.

For soybeans, global 2017/18 ending stocks are expected to come in at 95.53 million tonnes. This is up from the trade’s expectations of 92.14 million tonnes and June’s forecast of 92.22M tonnes. But it’s also barely unchanged from 2016/17’s carryout of 94.78 milllion tonnes. On the demand front, Chinese bean imports were raised by 1 million from last month’s forecast to 94 million tonnes. In case you aren’t keeping track of the trend, that’s a new record. China’s June soybean imports came in actually lower than expected at barely 7.7 million tonnes. As we outlined in last Thursday’s Breakfast Brief, the market was pricing in 8.5 – 9 million tonnes. The difference is the nearly 700,000 MT sitting in port waiting to dump, likely due to an import tax dropping by 2 points to 11% on July 1st.

For corn, global production was raised from June by more than 5 million tonnes, mainly thanks to bigger U.S. production. This means that the 1.037 billion tonnes expected to be produced in 2017/18 around the world is just a 3% drop from last year’s record crop. On the flipside, it’s also 7% larger than the global crop from 2 years ago. Production in South America is expected to be large again in 2017/18. Between Brazil and Argentina, the USDA is forecasting 135 million tonnes of combined production, down just 3 million tonnes from 2016/17 record crops. Digging deeper, Brazilian farmers are being forced into selling soybeans to make room for the 97 million-tonne corn crop they’re harvesting. Carryout-wise, global corn inventories of 200.8 million tonnes by the end of 2017/18 should be nearly 12% lower year-over-year. However, this is because of China extinguishing some of its multi-year leftover supply. 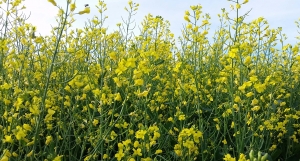 The downgrade from the June report is mainly due to 3 things:

Overall, we (and likely the rest of the market) expect more yield and production downgrades to the American crop before the end of summer. Whether this means downgrades in August and then again in September, I’m not sure. What’s certainly definitive is that in the next 4 weeks, weather forecasts will be over-analyzed and heavily compared to past years. More specifically, the bears will likely overprice the benefit of the rains. Meanwhile, the bulls will overprice the potential yield loss of the heat. And so we end up somewhere in the middle of expectations and the market finds an equilibrium.

While things have cooled off recently, we think there are some higher cash prices yet to come for higher quality wheat as more hot weather gets priced in. However, sell into strength, as no buyers want to buy at the top and the higher we go, the competition/demand will likely start to wane.