Farmers, researchers and government policy people are in Saskatoon today for the Prairie Agriculture Carbon Summit, hosted by the Agricultural Producers Association of Saskatchewan.

As APAS president Todd Lewis explains in the interview below, the intent of the conference is to drive a conversation about the role farm practices have in reducing greenhouse gas emissions and how public policy can recognize the positive contributions.

APAS recently submitted its comments (read them here) to the federal government on the proposed carbon pricing backstop that would apply to provinces that don’t sign on to the national climate change framework (ie. Saskatchewan and Manitoba, at this point.)

“Something as simple as exempting farm fuels from the carbon tax doesn’t go far enough as far as what the actual costs are for producers. We’re export-oriented, competing with the world, and if the rest of the world isn’t on a level playing field with us, it puts our producers in a difficult position because margins are pretty tight in agriculture, and if added taxes are put on, we can’t pass any of that on,” says Lewis.

APAS estimates when all the direct and indirect costs are added up, a $50/tonne carbon tax would increase Saskatchewan grain farmers’ costs by $15-20/acre.

In addition to awareness about the cost impact, the summit in Saskatoon is also meant to spur discussion about how farmers could be rewarded for reducing carbon emissions.

“We certainly do our part as far as sequestering carbon and lessening our carbon footprint. We’re producing more meat and grain than ever before, so our energy footprint is improving,” notes Lewis.

Todd Lewis on APAS’ carbon tax position, how it was developed, and the Carbon Summit underway in Saskatoon: 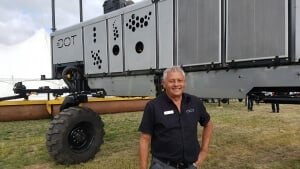 The launch of the autonomous DOT Power Platform this week was the result of a three year quest to make farm equipment more efficient in the context of the labour shortage in farming, says Norbert Beaujot. The U-shaped robot is attracting plenty of attention at Ag in Motion near Langham, Saskatchewan, with crowds watching as…Read more »

Scepticism warranted in another Phase One U.S., China trade deal

No big changes expected on supply management at Conservative convention