I truly believe that in your career you get the chance to meet a handful of people that you aspire to be more like. We all have that list of people in our head that inspire us, motivate us and push us to be better because they do the same. 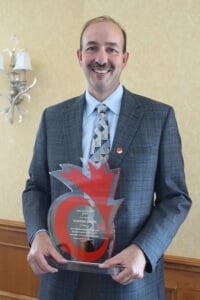 When I first started RealAgriculture I was very fortunate in 2009 to meet Steve Denys at a meeting in Las Vegas. Right away Steve and I hit it off, and have held a strong business relationship and friendship ever since. At the time Steve was at Pride Seeds and he was very responsible for the launch of RealAgriculture having a presence in the Ontario market with the launch of the Corn School and Soybean School. At the same time Archie Wilson was at C&M Seeds and we launched the Wheat School.

Steve is a farmer, family man, volunteer and highly respected with in the industry. I think Steve’s greatest strength is his ability to talk to an audience. Whether its a coffee shop, a customer event or the minister of agriculture, Steve can communicate very effectively.  Just don’t judge him for his love of the Detroit Tigers and Lions.

“Steve has done a remarkable job as an agvocate, strong communicator and passionate supporter of the seed industry. He’s contributed in many ways within his local community and on seed issues at a  provincial and national level. He’s a very deserving recipient of this award.”

Last week the Canadian Seed Trade Association recognized Steve Denys for his commitment by awarding him the CSTA Seed Achievement award at the organization’s annual meeting in Halifax, Nova Scotia. According to the CSTA website, the CSTA Seed Achievement Award recognizes and honours significant contributions to the Canadian seed industry. It is presented to an individual engaged in a private seed business or public institution based in Canada. Individuals are nominated by their peers and are selected by the CSTA Board of Directors.

On behalf of the entire RealAgriculture team, I want to congratulate Steve Denys on this award and thank him for his past and no doubt future contributions to our great industry of agriculture.

Super Bowl Sunday: “So God Made a Farmer” Steals the Show