We’re heading into the apex of summer weather (and the volatility that can come with it). It’s corn pollination and soybean pod-setting season, while combines are starting to run on the earliest seeded pulses and cereals in the U.S. and even parts of Canada.

More than anything, the market is mostly trading rain clouds and what areas are getting a drink. You could argue that the market hasn’t added enough weather premium into the market yet, given this crucial time of year. Remember though that grain investors have added weather risk premium to the market in the past, but it didn’t end up being justified. More simply put, traders might be getting better at catching on to the fact that with today’s agronomic practices and crop input technology and use, crops can weather the weather.

With this theme in mind, this week grain markets were fairly volatile. Oats and soybeans were the big winners of the week, trading 3.15% and 2.5% higher for the week. Corn and Minneapolis spring wheat also headed higher, up 1% and 1.5% each since last Friday. Conversely, Chicago soft red and Kansas hard red winter wheat future board dropped 1.85% and 1.6% respectively on U.S. harvest pressures. Canola opened on Sunday night at $506.40 CAD / MT and had a health gain over the week but took a plunge on Friday, dropping more than 1% to finish at $504.30.

Apart from weather, yield estimates have been the topic of the week. U.S corn numbers have ranged from 160 to 168 bushels per acre. Informa recently lowered their forecast to 166.2; Top Third Ag Marketing is thinking we’ll see 162 – 163; Progressive Ag Marketing bases their numbers on historical crop rating and says 168 is still in the cards; and the U.S.D.A. is at 170.8. Currently, I’d say that the market is pricing in something close to 167-168 bu/ac.

I don’t think that the USDA will drop the yield by more than 3 or 4 bushels in their August WASDE, which is now less than three weeks away. There’s much speculation to be had between now and then, not just on what the weather will do, but also what the USDA will do. From a crop rating perspective, we all know the U.S. Northern Plains aren’t faring too well. Those fields south of the #1 Trans-Canada Highway in Western Canada are in a similar boat with very little moisture since seeding. Ohio and Indiana’s crop ratings have been in decline for the past few weeks. However, everywhere else is looking pretty good for the most part. No one is necessarily suggesting a bumper crop where things are progressing well, but fingers are crossed to put the crop in the bin. 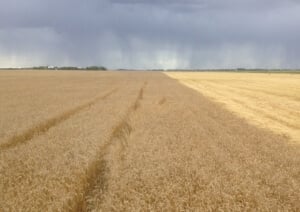 Talking with growers in areas that are pretty parched, the sentiment is that crops are tapping into as much soil moisture reserves as possible (how deep are your roots?) Is this factor being priced into the market? On the futures board, gains have been incremental, but we still haven’t seen the highs from the first week of July. Will we? I think it’s safe to assume that we should get near those levels, but it will depend more on speculative fund money pushing the board again because farmers have (maybe unanimously) decided to lock up bins and put a hold on new crop sales.

When we factor in behavioural economics, if you’re going with the rest of the herd, consider that you may miss out on opportunities. More specifically, if drier areas do earn some much-needed shots of precipitation, speculative money will head for their concrete hills (concrete because I don’t know too many hedge fund managers who understand agronomy). From a grain marketing perspective, there’s been plenty of opportunities to make profitable sales this year. Those who have a price risk management plan of hoping for higher prices start to ignore that at a certain point, others will start managing their own price risk and make sales.

Looking globally, the wheat harvest in Russia has started and while it’s behind last year’s pace, yields are up. Australia, Spain, and Italy have been a bit too dry. We continue to monitor crop conditions in these three nations, especially in the Land Down Undaa where wheat production estimates continue to fall below the USDA’s benchmark of 23.5 million tonnes. NIdera is the biggest bull, suggesting that the Aussie wheat crop could come in this year somewhere between 19 and 21 million tonnes.

For southern Europe, durum and soft wheat production are expected to decline notably this year. Agroinfomarket says that due to the smaller harvest, Spanish soft wheat imports are expected climb 40% year-over-year to 5.6 million tonnes. While we’re also cognizant of some wet weather in Germany, overall European wheat production should be relatively decent this year and closer to the long-term average. Thus, despite the “the sky is falling” or “crops aren’t growing” headlines of EU wheat production, EU wheat futures have only rallied about 6% in since the start of June.

We all know that the last time we saw a drought market was in 2012. DTN Progressive Farmer notes that then, 5 years ago global wheat stocks-to-use ratio sat at 26%, well below the 35% ratio that is expected by the end of 2017/18. Also in 2012, spring wheat peaked at $10.35 USD / bushel on the Minneapolis market in July. Since June 1, cash bids for hard red spring wheat in the US have risen by nearly $2.00 USD / bushel to over $7.20. This equates to about a $9 CAD / bushel, taking the exchange rate from this week, which has been toying with 80 cents USD. You could easily argue that the Canadian HRS wheat price would be even greater if it wasn’t for the strength of the Canadian Loonie (or the weakness of the U.S. Dollar, which is down almost 8% since the start of 2017). It’s undeniable that basis widening has restricted cash value gains in Western Canada.

Coming back to some datapoints, DTN also notes that that the spread between Chicago and Minneapolis are historically around 14%. Currently, it’s more than 50%, the 2nd-highest since 1980. The top all-time spread is owned by the month of February 2008 – a year we can all remember for wheat prices. Back then, the Minneapolis spring wheat premium was 69% relative to the Chicago wheat futures board. Thinking more broadly, there only have been five years that Minneapolis spring wheat had more than a 33% premium above Chicago. Each time, the premium lasted less than a year.

Overall, expected smaller grain production in the Northern Plains will bring more optionality for Canadian producers who are willing to sell across the border (Or just deal with grain buyers who export into America – we have both browsing the FarmLead Marketplace). Further, the volatility that these weather markets are having on the grain complex can create great opportunities. There are a few signs that we’re getting a little top-heavy again, suggesting further pull-back is on the horizon. Given that grain prices in most areas have barely been break-even, considering a sale in the next week or two is warranted.

“But Brennan, isn’t there more upside? The weather rally can’t be over yet, can it?”,, you’ll ask (or shout). I don’t necessarily think that’s the case for wheat, but maybe for corn and even more so for soybeans. Canola is in a similar boat as I think the final production number could come in close to 20 million tonnes (although it may not eclipse that mark). The further along in the calendar we get, the more the market will be able to accurately price in the crop. This makes it intuitively harder to pick the top of the market for new crop or even old crop still left in said locked bins. Notwithstanding, we’re seeing some healthy coverage by buyers through the FarmLead Marketplace the last few weeks: $10 – $11 CAD / bushel for durum wheat, $8 – $9 for HRS wheat, $11s in the new crop canola trade.

I could go on but you get the gist. Some solid opportunities are available. There’ll be some readers who will think, “this guy is just trying to get us to sell some grain”. Well first, I am. Second, if you do it on the FarmLead Marketplace or somewhere else, I could care less (although I am biased knowing you can deal with way more buyers at once on FarmLead!). What I do care about though is that you understand the downside risks versus the upside potential. As upside factors start to wear thin (because they’ve been priced in), the pullback likelihood becomes more imminent. For those older farmers who have had a few great years of farming in the past decade, perhaps their risk tolerance is a little higher as the bank account is looking 6 or 7-figure healthy! The younger generation doesn’t have the same appetite to weather that sort of cashflow storm.

Perhaps the only thing that made 2022 fertilizer prices palatable was the equally high commodity market prices. However, as farmers look ahead to the 2023 growing season, many are wondering if the high input prices are here to stay, even against declining commodity prices. Josh Linville is the fertilizer director with StoneX Financial, and says…