At some point you have to say goodbye to your favourite variety.

We all have our favourites for different crops. Some varieties last one year and others have more staying power based on a wider geographical fit or superior agronomic profile. In canola, Bayer’s Invigor 5440 has been one of the varieties that has been seeded on more canola growers’ farms than not.

According to Bayer’s Blaine Woycheshin, the variety is officially being retired from service to farmers across Western Canada because the company has better genetics in its portfolio. With the increase in demand for straight-cutting the patented Pod Shatter Reduction (PSR) hybrids InVigor L140P and InVigor L233P are increasing in acres significantly.

“InVigor 5440 is the standard by which all other canola hybrids are measured. We are in full retirement on InVigor 5440 and InVigor L130 because simply, we have better offerings for growers” 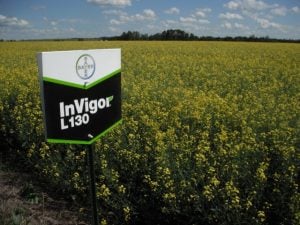 Companies dream of varieties that take a long term hold on the market, but getting all famers to buy the new genetics can be difficult. There are still growers planting InVigor 5440 this year. Some farmers latch onto a variety that works for them and they stick with it, while other growers like to always be trying something new every year.

Not since Hyola 401 have we seen a variety like 5440 have staying power over a ten year period like it has.

It’s been a good run InVigor 5440 and InVigor L130. Congrats on your retirement. You deserve it.

When in doubt check it out, bin management science, and cool research — a grain storage Q&A LIVE! with Joy Agnew

Wheat Pete’s Word, June 16: Too dry, too wet, too late, plus manganese deficiencies and an aphid reminder