Grain markets sold off this past week as the USDA came out with a surprisingly bearish report of world agricultural supply and demand estimates.

Instead of the roughly 166 bushel per acre US corn yield that market was expecting, the USDA came out with 169.5. That’s just a 1.2 bushel drop from the previous estimate of 170.7 bushel per acre. For soybeans, the July estimate was 48 bushels per acre and the pre-report guesstimate was 47.5 but the USDA actually raised the yield average forecast to 49.4! Echoes of “what?!” could be heard across the entire distance of the grain trade literally within minutes of the report.

As such, corn ended the week 1.45% lower while soybeans dropped 1.35% since last Friday. Chicago wheat saw more of a sell-off, dropping 3.55% on the futures board, Kansas City hard red winter wheat futures dropped 3.4%, and oats was even worse, falling 7.15%. Minneapolis hard red spring wheat market sold off significantly as well as the December contract dropped 6% in week, including losing more than 27 cents on Friday, August 11th alone. Canola traded up 1.4% for the week as the Canadian Loonie lost 0.2%.

For canola, EU rapeseed production is forecasted at 22 million tonnes, meaning they’ll have to import less in 2017/18. That being said, EU rapeseed imports for 2016/17 were revised higher by 380,000 MT 4.8 million tonnes. The USDA also says that the bigger crop in the EU also offsets output reductions in the US and Canada.

In the Great White North specifically, Canadian canola production was dropped by 500,000 MT to 20.5 million tonnes. That’s above almost every other estimate I’ve seen, including my own (sitting around 19.75 million tonnes). The USDA is forecasting average Canadian canola yields at 36.6 bushels per acre. This, despite admitting below-average soil moisture conditions across Western Canada and higher temperatures in Saskatchewan and Alberta. We’ll see in 3 weeks on Thursday, August 31st how StatsCan feels about this number when they release their production estimates (albeit, they’re based on July surveys).
From a demand perspective, the USDA raised 2017/18 Canadian canola exports by 200,000 MT to 11.2 million tonnes in their July estimates. However, this month, that 200,000 MT was erased, and the number was moved back to 11 million tonnes.

Where tonnes were created (and not erased) was in Russia. They’ve got something going on in the soil over there because the USDA just increased wheat production by 5.5 million tonnes from their July forecast to 77.5 MMT. This is 5 million tonnes above last year’s record. The USDA says the reason for the increase was two-fold. First, higher yields were seen in the winter wheat areas. Second, satellite imagery in spring wheat-growing areas of Russia shows some pretty deluxe conditions. Overall, total average wheat yields in Russia are pegged at 43 bushels per acre. That’s up 10% from last month’s estimate, 8% higher than last year’s record, and 25% above the 5-year average.

Ukrainian wheat production was also increased, up 2.5 million tonnes from July’s estimate to 26.5 million tonnes. The market was instead expecting a downgrade. Yes, hot weather hit part of the country that produces about 40% of the crop. Apparently, the other areas made up for it though. The USDA pegged average nationwide wheat yields at nearly 60 bushels per acre! With 92% of the Ukrainian wheat harvest done, put a fork in this number because it’s done (READ: not being revised).

Globally, oilseed production is forecasted at a record 577 million tonnes in 2017/18. Global soybean production is forecasted at 347.4 million tonnes, just 1.25% below last year’s record of 351.7 million. From a global demand standpoint, China continues to the lead the way although their soybean imports for 2017/18 went unchanged in this report at 94 million tonnes. However, more bearish news followed this morning. China’s soybean crushers have suspended operations because of inspections and high soy-meal stocks. [3] This is happening even though they are finally making a profit ($6 USD/MT) after losing money on each tonne they processed for the last 6 months.

Sidenote: Canadian soybean production is estimated at 8.2 million tonnes with average yields of 42.4 bushels per acre.

Second side note: Russia’s soybean production of 3.9 million tonnes this year would be their second straight record crop. Average yields are only pegged at 23.2 bushels per acre, but that’s 19% higher than the 5-year average. It might take a few more years, but given the unseeded land available in Russia (rumored to be around 20 million acres), they might have the potential to be a player in the soybean market in the future. 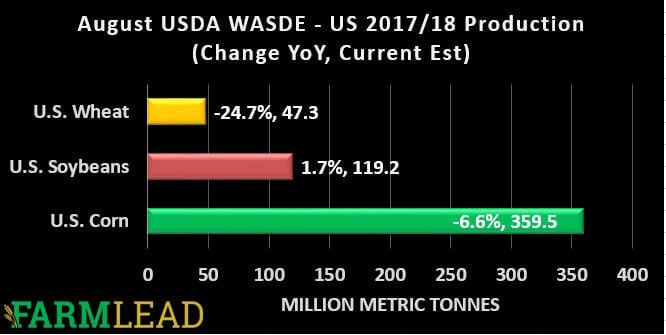 For corn, if the 169.5 bushel per acre average yield turns to be the final, then that would be the third-highest yield ever in US history. This US corn production came in at 14.15 billion bushels, whereas the market was expecting around 13.855 billion bushels. Globally, total corn production was lowered by 3.5 million tonnes, mainly because of the reduced American numbers. Thanks to some heat in Europe, the crop there was reduced by 1.6 million tonnes to 60 MMT. Average corn yields in the EU are pegged at 111.3 bushels per acre, pretty much in line with the 5-year average.

Despite some hot weather in China, the USDA kept corn production in the People’s Republic at 215 million tonnes harvested across 86.5 million acres. This means average yields of 97.8 bushels per acre. For global ending stocks, the USDA didn’t change much, keeping worldwide carryout things at nearly 201 MMT by the end of the 2017/18 crop year. Sure, this is almost a 12% decline from the 2016/17 carryout, but China sold off a bunch of its inventory. And because China doesn’t import a whole lot of corn (3 MMT last year, 3 MMT this year), their ending stocks decline doesn’t have an impact on global corn prices.

Quite simply, what we know is that even if US number do eventually get reduced, there’s still a lot of corn out there in the world. But the US number is the big piece the market is focusing on. And these numbers are not final. Thus, in the distance, there’s plenty of echoes that numbers will head lower. From a price point, any rallies will unfortunately be met by harvest selling pressures.

Canola catches a tail-wind, but does it have the momentum to hold on?

Navigating murky waters – this week in the grain markets