I thought goodbyes were supposed to be hard, and that they usually bring tears, hugs, and long waves of sorrow.

Glen Murray’s resignation as Ontario’s Minister of Environment and Climate Change has left many farmers across the province smiling, even though the wake of his non-science-based decision-making will be felt long after he is gone.

Murray the environment minister will be remembered by the agriculture community in Ontario for taking away a useful tool for raising crops — neonic seed treatments — based on a non-scientific reaction and a plan pushed by activists. In a process that lacked any genuine industry consultation, the reduction in the use of neonics was going to happen no matter what science said. Farmers were plainly steamrolled on the neonic ban due to Glen Murray’s idealogical-based decision making.

As our own Bern Tobin noted, Murray “made few friends in the Ontario farm sector with his push to restrict use of neonicotinoid seed treatments, dismiss sound science, and impose the will of his urban-dominated government on the province’s farmers.”

READ: Did Farmers Just Save the Bees before Glen Murray Could?

There was a point last fall where Murray apologized to farmers at the Ontario Federation of Agriculture meeting. In a surprising 20-minute address, a contrite Murray apologized to the convention for his poor relationship with the province’s farm community and committed to mending his ways.

“I apologize to you for anything that I said that might have hurt or been offensive,” Murray told the meeting, claiming that many of the things attributed to him he did not actually say. “I will double down in my efforts to work with you and to sort through the problem. I hope this will be the beginning of the conversation, not the end.”

Many did not take his fence-mending speech seriously as he showed little willingness to ever have a conversation. For example, he regularly blocked farmers and other agriculture industry people on his Twitter account. I include myself in the blocked camp.

The bitterest pill for many was that Murray and the Ministry of Environment, not the Ministry of Agriculture, dictated how farmers grow crops in Ontario. Ideologically sympatico with Premier Kathleen Wynne, Murray’s views on the environment, climate change, and what was best for bee health were very influential on provincial policy.

Farmers in Ontario are saying goodbye or good riddance as Glen Murray moves on (to the Calgary-based Pembina Institute), but they surely they will never forget him and the impact he had. 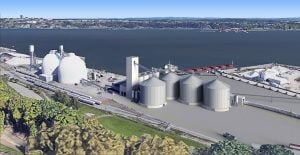 La Coop fédérée has announced plans for a $90 million grain transfer terminal to be built at the Port of Quebec for agriculture commodities destined for European and Asian markets. The new terminal at Pier 106 in Anse au Foulon will have the capacity to export of 1.3 million metric tons of grain per year, with an…Read more »

Corn School: Be on alert for tar spot, a new leaf disease

Corn School: Making the Most of an Uneven Stand

The Agricultural Opportunity In Montana is Similiar to Western Canada

One thought on “Goodbye, Glen Murray — Ontario farmers will never forget you”