Grain prices all headed lower this week as beneficial rains and slower bullish headlines pushed more profit-taking action in the markets. Canola traded sideways for the week but did drop down to $492 CAD / MT before closing at nearly $507 on the November contract. Soybeans acted similarly, only losing 0.1% whereas its acreage competitor, corn, lost 2.65%. Oats took a spill as well, down 3.4% while Chicago wheat was the worst performer since last Friday, losing nearly 5%.

Another inch or two is forecasted for the next 7 days for the Dakotas and parts of Nebraska. Nearly half of North Dakota is considered to be experiencing extreme or exceptional drought conditions. At the start of the growing season, very little of the state was dry. More rain in the Northern Plains is a good thing. It certainly will help add to the soil moisture profile that will be needed to help next year’s crop. It will likely also boost some crop prospects in the region. For other parts of the Midwest though, the rains are a bit too late and won’t help crop development. These rains are critical thought for Iowa’s fields as 70% of the state is now experiencing some level of drought.

Those areas that have been extremely dry are experiencing some tip-back issues. Weather will certainly affect total yield and production numbers. The USDA hasn’t seem to incorporate any of this feedback yet though considering their yield estimate last week was 169.5 bushels per acre. This coming week though we’ll have the annual Farm Journal Crop Tour that has 2,000 scouts tour across the Corn Belt for 4 days. Results will be tallied and submitted at the end of each day with the western and eastern leg participants meeting in Rochester, MN on August 24th for final estimates. Most think that Chip Flory and his Farm Journal team will come up with a number under 165 bushels per acre for corn.

As such, I think there could be a bullish rise in corn prices next week. The problem is though that there’s still a lot of old crops out there and will keep a lid on new crop pricing rallies. This is a theme we’ve been talking about literally since the beginning of 2017. Simply put, we’re running out of time for corn prices to be influenced by weather premium. Even with a lower yield number out from the USDA next month, we’ll be in the middle of bearish harvest pressures. From a demand perspective, it’s also worth mentioning that Mexican corn importers are pausing their corn purchases until more is known about the NAFTA renegotiations.

While we’ve got the USDA’s estimates already and StatsCanada will come out with their forecasts in two weeks, what does the private market think of Canadian crop potential? Bloomberg’s recent survey of traders and analysts is putting the 2017/18 crop at multi-year lows. Wheat output is expected to come in at 26.4 million tonnes, or 17% lower than last year and the smallest haul since 2011. Similarly, the durum wheat crop is estimated to come in at 5.1 million tonnes, the lowest in 5 years and down 35% year-over-year.

The drop is partly due to the decline in acres planted in Canada this year from last year. The other half of the blame goes to the fact that some areas have received less than 40% of average rainfall since April 1st. The challenge with this though is that it could limit the amount of winter wheat acres that get planted this fall in Western Canada. There is data that backs up the worthiness of planting winter wheat when soil moisture is less than ideal. 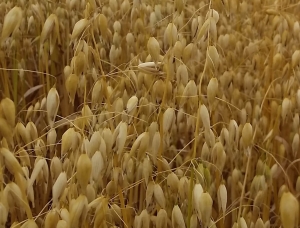 On oats, there are concerns that Western Canadian crops ran out of moisture and didn’t fill. Accordingly, below-average test weights are one of the concerns that buyers are considering. However, the largest oats-producing areas have seen enough rainfall that crops are looking about average. That said, cash bids have been trending sideways-to-lower as we get closer to harvest. Nonetheless, once you have it in the bin, we strongly recommend getting that grain tested to make sure you can ensure you meet buyer’s specs. This week we launched GrainTests.com to help you do this so go check it out.

For canola, expected production is set at 18.1 million tonnes. Considering that there are about 19-20 million tonnes of demand for Canadian canola forecasted in the 2017/18 crop year, it can be easily considered as bullish. This factor is why, as we mentioned last week in my daily FarmLead Breakfast Brief, we’re looking to fill contracts and then start to price out canola likely in late fall / early winter.

Ultimately, we’re at the time of year when old crop meets new crop. It’s no different for pulse crops like peas, lentils, and edible beans. These are markets where carryout is usually small so the smaller production numbers that we’ll likely start to hear about in the next couple of weeks are going to have some impact on price. As our friend Chuck Penner from Left Field Commodity Research points out, buyers are also at a crossroads as they re-evaluate their coverage and needs over the next few months.

We have seen yellow peas prices have some good support. Some $9.00 CAD/bushel for off-the-combine movement on the FarmLead Marketplace. Green peas prices though, continue to be pressured by readily available stocks and seasonal price declines. Chuck points out though that green and yellow peas prices tend to bottom out in August or September.

Red lentil prices have also been trading sideways-to-lower as plentiful global supplies are allowing buyers to be timider. Lower producer though in Canada and Australia should offer a boost to prices. While red lentils have been sitting around 25¢ CAD/pound, we think it’s healthy to look at filling your existing new crop contracts before pricing more out. If you don’t have any coverage yet, consider a first sale that doesn’t start w/ a 30 cent number on it. For green lentils prices, we’re seeing bids on the FarmLead Marketplace almost 20 cents/pound higher than reds, which is a bit above the norm. This is because the supply pipeline is a lot tighter than what we see in the red lentils market. Drought impacted larger US acres this year, which has been another bullish factor we’ve been watching.

Like reds, we’d recommend filling new crop contracts but if you have no sales on the books yet, ask yourself, “Other than the last 2 years, how many times have you sold your large green lentils for 45 CAD cents/lbs?” I’m also not suggesting you sell your entire production. Just a 10% block. That way, if prices go up, you can still capture more value. But there’s no guarantee they’ll go up.

The good news is that the weather should be decent for harvest in Western Canada this year, according to Drew Lerner of World Weather. The usual threat of frost will start to arrive in early September, but Lerner says that most crops should be advanced by then and to expect limited harm.