My daughter and grandson share the same birthday, August 7. They’re part of a pork-and-grain farming operation near Thamesville. At their birthday celebration on the weekend, our family barbequed pork sausage from their farm on the campfire.

There was no reason to doubt the quality of the sausage. We trust the meat packers in nearby Dresden who make it for them.

But not everyone is so lucky…such as the other millions of Canadians who don’t produce their own meat, or don’t know a neighbourhood butcher they can trust.

And I’m sure their collective jaws dropped — along with some of their trust in the meat sector — when headlines carried news about a University of Guelph study that found high levels of mislabelling on sausages in Canada.

Guelph researchers found what they’ve diplomatically called “mislabelling” and cross-species contamination of meat ingredients in 20 per cent of sausage samples selected from grocery stores across the country.

According to the university, most cases involved meat substitution, such as sausages labelled as beef that also contained pork. Others labelled as chicken also containing turkey. And one pork sausage sample even contained horsemeat.

I’ve heard some people chuckle about it. “What do you expect?” they say. “It’s sausage.”

But that’s a slippery slope. And it doesn’t hold water with consumers.

While no one expects to get Canada prime when they buy sausage, they do expect the label to be honest. They have a right to that. But in one in five cases, that’s not what they’re getting. And in all of the Guelph study samples, the product labels clearly claimed the sausage contained only one kind of meat.

I’m sure the processing sector is aware of how this mess impacts consumer confidence at home and abroad, and wants it cleaned up. Health, safety and ethical issues side, the situation conjures up memories of the unfortunate 2013 European horsemeat scandal, where processors there were nailed for selling beef that was actually horsemeat.

And now, at a time when the public is increasingly skeptical of processed food’s wholesomeness, the sausage episode casts a pall on processed food here. You’d like to think meat processors would self-regulate, but the Guelph study makes you wonder if that’s the case. And although it’s a processor issue, or at least appears to be, it makes farmers look bad by association.

There’s one bright light in all this, though – that is, homegrown technology has advanced to the point where false claims can be exposed, and the whistle can be blown on mislabelling practices. Working with the university, the government has a chance to get on top of the issue (the Guelph research was funded by the Canadian Food Inspection Agency). This is the same technology that earlier exposed fish fraud.

But it all leads to a much bigger question: In this culture of uncertainly, besides counting on researchers shedding light on the truth, how does agriculture promote trust among consumers? 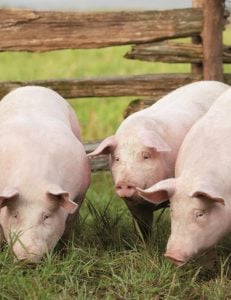 From Quebec, pork producer and processor duBreton is working to convince people high animal welfare standards are the key to trust.

“Pretty labels are not enough,” says the company, claiming that most people “want claims on meat products to be certified,” and cites a recent survey backing up its position. It says more than 80 per cent of consumers surveyed agree that a brand making claims about animal welfare should verify them by an independent, third-party organization that routinely monitors the conditions in which the animals are raised.

Last week, the company announced it’s now a part of the “Certified Humane” program, noting it’s the only Canadian company involved in the program.

It says participation in this initiative can give consumers a level of confidence that the pork they’re buying from duBreton has been raised to well-defined ethical standards, and is checked and verified by program inspectors.

“Compared to commodity or traditional farming practices, this practice costs us 50 per cent more to raise Certified Humane pork and more than double to raise an organic pig,” says the company. “But we believe it is worth it.”

The Certified Humane program doesn’t speak to authenticity. But in a separate message related to the sausage scam, company president Vincent Breton said “DuBreton’s sausages are 100 per cent pork, and we do not use any other proteins.”

The Certified Humane program underlines the extent to which some companies feel they must go to address consumer concerns.

But humane production, no matter how you define it, won’t mean anything if the processing industry isn’t honest about ingredients.

And hard-working Canadian farmers shouldn’t have their livestock misrepresented like this once the animals leave the farm.