AGCO has expanded its Rogator lineup, unveiling and exhibiting its C Series this summer at several farm shows, including the Farm Progress Show in Decatur, Illinois. The new series features a SmartDrive system, updated cab interior and the new LiquidLogic recirculating plumbing.

“With the prevalence of herbicide-resistant weeds throughout the country and the introduction of new herbicide systems to control these weeds, greater management and attention to detail will be needed for anyone applying herbicides,” says Mark Mohr, tactical marketing manager for AGCO’s application division. “The engineering and technology of the RoGator C Series machines and new LiquidLogic system are going to help operators simplify their jobs, reduce potential for off-target application, make cleanout faster, easier and more thorough and reduce product waste.”

“We now have a SmartDrive system, where we have communication at all four corners of the drive system,” says Craig Miller, sales & marketing specialist for application equipment for AGCO.

The system has integrated speed sensors which can sense slipping in a tire and redirect oil flow to the other three. As well, the sprayers have turn compensation technology to reduce berms.

The cabs on the C Series feature a new arm rest with a joy stick which functions similar to continuously variable transmissions. Operators can also make use of cruise control, shuttle shift, USB power ports, a programmable keypad, a rearview camera for reversing and a 10.4 inch AccuTerminal touchscreen.

Also new on the C Series is recirculating plumbing, which completely eliminates dead-end pipe. This, according to the company, reduces chemical buildup and helps prevent plugged spray tips.

If an operator needs to break during application, they force air pressure through the system, blowing the product back into the tank. Before spraying, the operator can prime the system by recirculating product through the pipes. The removal of air in the lines, says Miller, can be done by the time the booms are unfolded and set to the right height before carrying on.

The sprayer is also outfitted with a ‘hold at minimum’ pressure setting, which helps to ensure a consistent spray pattern by keeping the product on target even at low speeds.

The C Series is slated to be sent to dealers by the end of September. 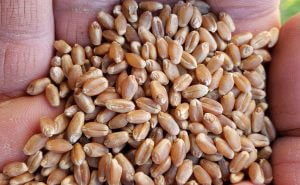 Alliance Seed and SeCan say they've agreed to a cash settlement worth over seven hundred thousand dollars with a large farm in southern Alberta that made unauthorized sales of barley and wheat varieties protected by plant breeders' rights (PBR) legislation. Alliance, SeCan, and one unnamed seed distributor will receive $737,597 in compensation for royalties, as…Read more »

Six Tips for Winterizing your Sprayer