I’m fortunate enough to get to meet all kinds of farmers. Usually when we meet, the conversation is a standard one. What’s the weather been like or how is the harvest going? Politics, just like sex and religion, is usually left out of it.

Farmers keep bringing it up in their conversations. That conversation is about the squeeze by government and how it is getting too tight. Or keeping them up at night. Or making them question their very survival.

It would seem that the federal government, along with the help of a few provincial ones, want to see if there is any more depth in a farmer’s pocket.

Of course, we always see these little disruptions. Small changes that farmers say will add costs to their bottom line. But this is different. The changes are piling up faster and faster. Some haven’t even been enacted before the next one gets announced. And as we run through the most obvious squeezes, the question that lingers is whether this government is so out of touch with agriculture that they don’t realize their impact, or they do realize and just don’t care.

Crunch one is the carbon tax. Now this first step was one that seemed to simply add a few dollars to each expense line. Diesel fuel: a few bucks. Natural gas grain dryer: a few more. Delivery surcharge of inputs: more yet. Electricity: more. And while the idea to reduce consumption in admirable, going to horse and plough and giving up the tractor doesn’t really work for anyone trying to be competitive in a global marketplace. But with this one, farmers kept going in the provinces that enacted them. Paying the extra dollars over their international counterparts upset them, but they pushed through. 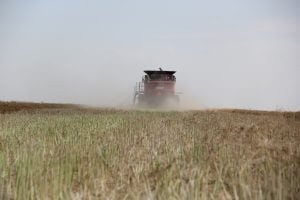 Crunch two is squared in Ontario and Alberta, where the governments are ready to push minimum wage to $15 dollars an hour. Over the last few weeks I’ve heard this one over and over again. Farmers who depend on staff to pick fruit, prune plants, and package food make up an important link in Canada’s food supply. The farmers that bring this up all note that it isn’t that they think their employees don’t deserve it. The problem is what their competition pays.

In Michigan, the minimum wage works out to 11.05 CAD. In Pennsylvania and Wisconsin, it’s 9.00 CAD. In Georgia, it’s 6.39 CAD. In Mexico, it’s 5.55 CAD. The question has to be asked, where is the tipping point when Canadian farmers can absorb higher costs while still competing for shelf space in the grocery store? Want to know why imported food can be cheaper? Because costs like labour are lower. And if costs like labour become nearly three times that of local labour, then the question has to be asked – will consumer still choose local out of the goodness of their hearts? Or more importantly, will large retailers forget their shareholders and pay more for local and take a smaller piece of the pie from the grocery stores shelves. Good luck with that concept.

And if that wasn’t keeping enough farmers grovelling for a few more pennies, comes crunch three. Proposed changes to tax rules. Of course the government has tried selling it as leveling the playing field, and closing tax loopholes from wealthy Canadians who own corporations. The problem is that there are a lot more Canadians that own corporations than just a few wealthy ones. Many farmers own them since they own a farm business, and they’re finding out the their tight margins and the structures used for passing their business on to the next generation are at risk.

Things like income splitting, where you move some income to family members in a lower tax bracket, won’t be allowed. But what if that family member pays the bills after the kids go to bed, or helps calve a cow in the middle of the night or drops everything to make a run to get parts for a broken combine at harvest? Then what? Is that a wealthy Canadian avoiding taxes or a family working together and sharing in the profits in a good year and getting nothing in a bad one?

It’s no wonder that a farmer can’t help but have this conversation. And to be honest, it proves just how serious of an issue this is. After all, farmers are proud. They are private. They never share their financial information. But, it is becoming so concerning they can’t help but feel threatened — threatened enough to bring up politics and their financial situation as they worry aloud about what might be to come.

I don’t think farmers are asking for the moon. They simply want to make sure that the product they grow has a chance to compete against others in the world. If it doesn’t, the consequence is simple: it rots in a field or a bin. And the stench from that will be sure to carry right through to election time.

Our federal gov wants to tax small business more because we’re just a tax shelter, it’s 12:30am and my kids and I are still working #CdnAg pic.twitter.com/HZBzlPKw2i

As a point of interest, I’ve found pictures from farmers online sharing their view from the “tax shelter” pretty amusing. If you’ve got one to share, I’d love to see it. Just add the hashtag #TaxShelter for all to see.

Nothing beats hanging out in my tax shelter of a combine till 2am working to put food on your table. @JustinTrudeau #taxshelter #CdnPoli pic.twitter.com/aMORl9WC2B

4 thoughts on “Getting crunched: Government squeezes on farms are adding up”