The WR9900 series, built under the Hesston brand, includes four models that replace the WR9800 series. The models are capable of operating 9200 series auger and disc headers and 5400 series draper headers.

“The design and features of the new WR9900 Series were driven by what hay producers and custom forage harvesters told us they wanted in a windrower — increased performance, power and comfort,” says Shaun Allred, tactical marketing manager for hay and forage products at AGCO. “In response, we developed the new 265-HP model WR9980, our most powerful windrower yet. It can easily handle heavy crops such as thick grass or winter forage without the inconvenience of a larger wheelbase, added compaction-causing weight or overall dimension.”

A new hydraulic system powers up the cutting, for a 20 per cent increase in available flow to 16-foot headers. The larger tandem hydraulic pump provides support, with additional hydraulic flow, and larger hydraulic motors on the disc header deliver power to the cutterbar and conditioner rolls. To help sustain the increased hydraulic capabilities, the new models are outfitted with a larger hydraulic oil cooler.

In addition to engine performance changes, the WR9900 series was built with operator comfort in mind. The VisionCab, with 130 square feet of interior, offers improved visibility, comfort, and a smoother ride.

“Getting hay harvested ahead of adverse weather is a common challenge and often means long hours in the field,” says Allred. “Adding more safety and comfort features to make them easier to operate was extremely important when designing the new WR9900 Series windrowers.”

Operators can stay comfortable with 50 per cent greater cooling from the air conditioning system, rest their feet on foot pegs, and listen to their favourite podcasts through bluetooth (while charging their phone with a simple USB plug-in).

And, after a long day in the field, a press of a button will auto-reverse the fan to clean out the radiator screen.

The new models are also available from Challenger. 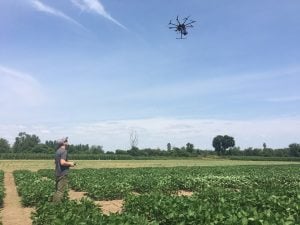 Wheat Pete’s Word, Feb 17: Extreme cold, the view from above, and how to scare away birds

It's only 11 days until the meteorological start of spring, which is pretty cool, but so are the temperatures in Ontario, in Western Canada, and all the way down to the southern U.S. On this Wheat Pete's Word, our host Peter Johnson fields all sorts of questions about the cold, plus manganese, scaring away birds,…Read more »