Agriculture Minister Lawrence MacAulay continues to downplay the potential impact of the Liberals’ proposed tax changes, despite widespread concerns voiced by many farmers, small business owners and their accountants.

The minister took 10 minutes to sit down with RealAgriculture in his office in the Confederation Building on Parliament Hill this week to discuss the tax reform proposal and the NAFTA negotiations held in Ottawa.

Staying away from specifics, he emphasized the tax proposal is not final.

Despite having met with multiple farm groups in-person and having access to experts’ analysis on the topic, MacAulay repeatedly said he needed more information or facts to understand why accountants and farmers are raising the concerns that they have. (Unfortunately we did not have an accountant in the room or the time to get into more detail.)

Here’s our conversation, with a written Q&A summary below (please share your opinions in the comment section below):

Farmers, farm groups, accounting firms representing farmers are all raising serious concerns. Have you considered speaking up against the tax changes your government is proposing?

MacAulay: “The fact is there’s really nothing to speak up against yet. There’s a discussion paper issued, and I’ve said every day in the house that we want farmers’ input into what’s put in place for the legislation. There’s absolutely no desire to do anything in the world that would hurt anybody except make the tax system fairer, and that’s what we intend to do.”

There seems to be a major discrepancy between what you and the Finance Minister are saying and what accounting firms are telling farmers. What’s your explanation for this discrepancy?

“What is the discrepancy, I’d have to ask. The thing is we have a discussion paper and we want to know what people think. We want to make sure, basically, that if you put a shell corporation together to avoid paying taxes, that’s a problem. Other than that if you’re involved in the farm, work in the farm, have input in the farm, the legislation is not written yet, but I would suspect that would be quite acceptable…”

Accountants say the proposed changes will substantially increase the tax bill on intergenerational transfers. What assurances can you give farm families facing this situation? Will there be exemptions or changes in the actual legislation?

“I’m not sure what the accountants are referring to. The present system as it stands is not an easy situation when you have to transfer… If there can be something done in order to make sure that can be made easier, that’s what I would like to see happen, but I do not see anything at the moment. Again, the bill is not written and I would have to know just what the problem is before I would respond to it, and I supposed then I’d have to have the bill written in order to know what the actual direction is.

“If your listeners could please respond to the minister and the discussion paper as to what these problems are, we want to know. This is not being done in order to make it more difficult. This is being done to make it better. Basically, this will not be an asset to the wealthiest corporations in the world. There are a lot of people that need help in this country.”

There are also a lot of people who would describe themselves as middle class, and their accountants tell them these changes will have a big impact on their businesses.

“I would have to know what changes. The fact is I know of no changes to this point that would have a negative effect unless you’ve got a corporation together. And again, I don’t want to indicate what the legislation would be…but what we want to do is make sure the agricultural sector has their input in to the Minister of Finance because I can assure you Minister of Finance wants to make it better, not worse. It’s quite difficult to respond to somebody saying it’s not good, but we’re not sure what it is.

“Perhaps there are problems. If there are, be sure we know. That’s why we have a discussion paper, to make sure we address the issues as well as we possibly can. But in the end, what we want is a fair tax system.”

Accountants say these changes (to how capital gains are treated) would make it easier to sell an incorporated farm to a non-family member. Would you support that?

“In what way? I’ve heard it too. I’ve also heard on the floor of the House that if your combine burns in the field you can’t use the money in the corporation to repair the combine. That’s totally incorrect. I highly suspect the government is going to put a bill in place that would impede a farmer to repair his combine. There’s a lot of things being said, but we have to make sure their factual.”

Why, in your opinion, are we lacking these facts then?

“In fact, what we want to do is make sure we have a fair tax system. I represent farmers at the cabinet table and would be very pleased to indicate a problem that they have, but if it’s just for a tax shelter, that’s a problem. If there’s anything else, not only do we not want to impede anything, we want to make sure if you have a corporation that it expands, that it does better, that the dollars are there to make sure the farm does better, because quite simply the world has to produce half as much food again in the next couple of decades…”

What do you see as your role as Minister of Agriculture? There’s a major concern being expressed in the farm community — are you passing on those concerns in cabinet? Are you trying to influence this in cabinet meetings, make sure the finance minister is aware of these concerns?

“Always. Any concern I get from anybody I represent, farmers or anybody else, I make sure that issue is brought forward.”

I think the issue farmers have is they are having to choose whether they trust their accountants or the people here on Parliament Hill.

Moving on then (after being told by MacAulay’s staff that we were almost out of time), NAFTA negotiations are underway in Ottawa. What are your priorities for Canadian agriculture?

“The word I get pretty near all the time is ‘be careful in trying to fix something that’s not broken.’ They understand that agriculture exports have quadrupled and what we want to do is make sure we build on that great prosperity,”

Thanks again for taking the time, Minister.

“You shouldn’t have spent so much time on NAFTA.” Laughs. 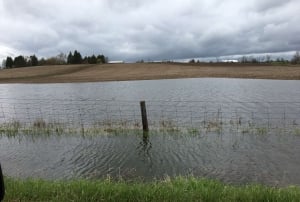 The few, the productive, the ignored: What farmers need from Ottawa right now