The agricultural industry this week was impacted by some geopolitical tension. North Korea and U.S. President Trump continue to trade warring words, while in Canada, a battle has started between small businesses and farmers and the Liberal federal government over proposed tax reform. For grain markets, losses were made up for from last week’s bullish technicals, and re-ignited buying interest helped push most prices confidently into the green.

Oats were the big winner, up 5.2% for the week, followed by Minneapolis hard red spring wheat, which gained 2.1%. Soybeans, gained 1.7% with a big run towards the end of the week on much-better-than-expected exports sales. Kansas City hard red winter wheat was up 1%, Chicago wheat eked out a 0.15% gain from last Friday. Canola improved by 1.05% to get back above C$490/metric tonne on the November contract on the Winnipeg ICE futures board. Corn was the only big loser, down 0.35% for the week, mainly because of export sales came in below expectations.

American corn export sales were announced at roughly 527,000 MT or 20.7 million bushels. For corn, exports sales are tracking 16% behind the average for this time of year. However, US corn total-marketing-year exports are expected to fall 7% compared the average of the past few years. 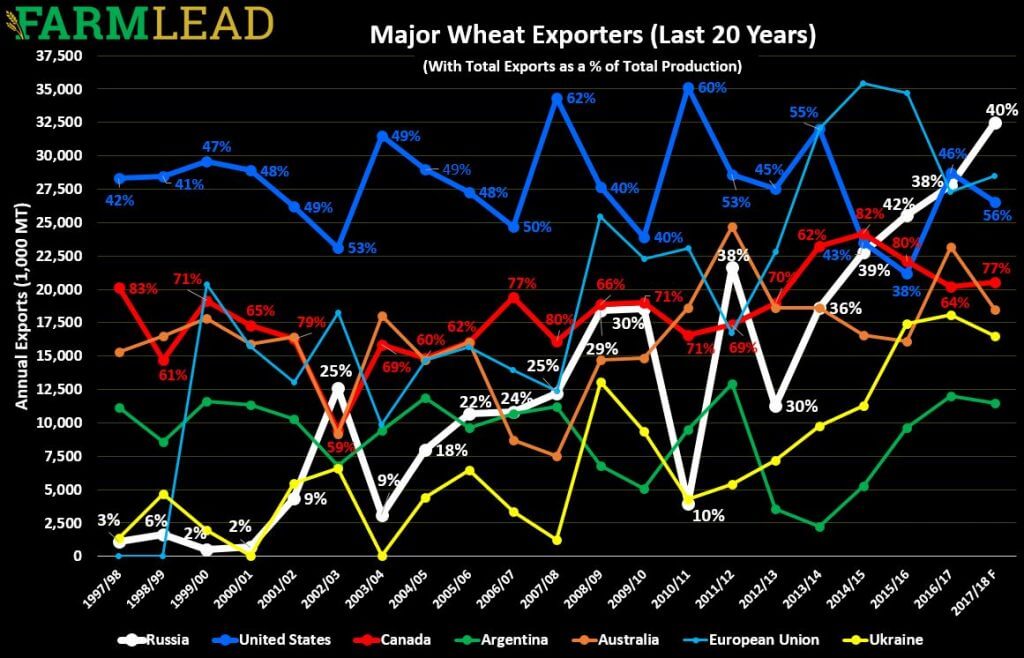 U.S. wheat export sales were at the low-end of expectations, with a little more than 307,000 MT or 11.3 million bushels. In another FarmLead insights piece published this week, we examine the rise of Russia’s wheat production and exports. Also, we explore how Russia has affected other major exporters and what it means for wheat farmers in other countries (including Canada & the U.S.).

Agritel thinks that the Russian wheat harvest could get bigger yet though. Yields in the Central, Volga, and Ural regions are tracking 27%, 27% and, 12% higher than 2016’s! 82% of the wheat harvest is in the books with average yields above 51 bushels per acre! Last year, those average yields were just over 43 bushels per acre. With these sorts of yields, total harvested volumes are already above 78 million tonnes. As such, Agritel thinks that the USDA’s target of an 81-million-tonne wheat crop in Russia may be underestimated.

This week, Statistics Canada surprised the market with their own upgrade to the wheat crop in the Great White North. This week’s grain production estimates from StatsCan Is based on satellite and climate data. It was generally viewed as bearish, as the only crops that got smaller were canary seed, flax, and mustard. 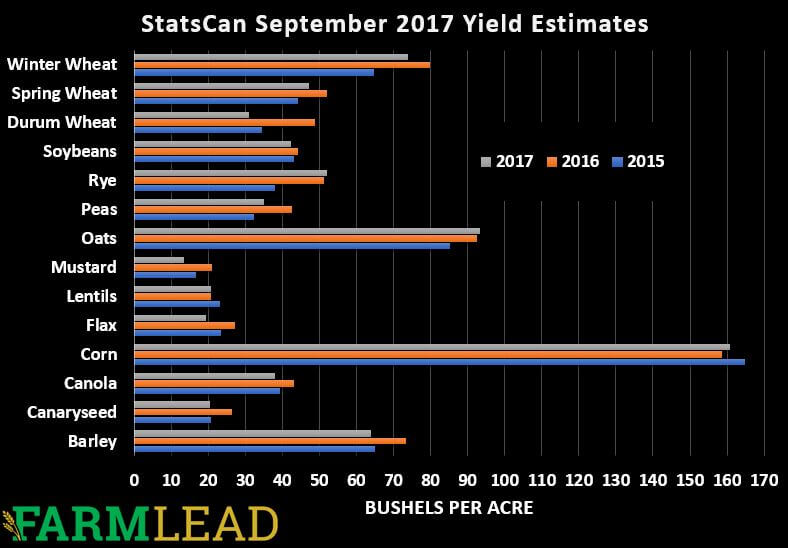 For durum, the satellites suggest a 4.3-million-tonne crop. This is a healthy improvement from the 3.9 million tonnes forecasted 3 weeks ago. However, the 5-year average is still nearly 5.9 million tonnes. Average yields are pegged at 31 bushels per acre, a drop of more than 1/3 from last year’s crop. Adding to a smaller crop is acreage is down 13% from 2016. 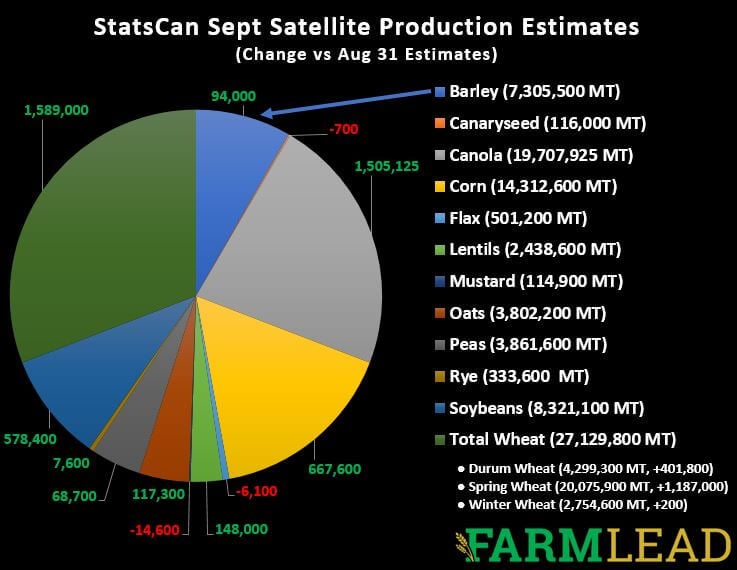 For corn, StatsCan’s satellites estimate a 14.3 million tonnes. August’s estimate from StatsCan was 13.65 million tonnes while the USDA is currently calling for a 13.9-million-tonne crop. Worth noting is that Ontario’s average corn yields are estimated at 169.5 bushels per acre. The record was 170.6 set in 2015.

For oats, the satellites suggest 3.8 million tonnes of production in Canada this year, versus the previous survey-based estimate of just under 3.7 million tonnes. Rye production was also similar at 333,6000 MT this turn versus the August estimate of 326,000 MT. The satellite estimate for barley production was very like August’s at 7.3 million tonnes. While the numbers on barley are somewhat bearish, there has been some improvement in the price of late. For the past 2 weeks we’ve been recommending to lock in some movement of either feed grains (i.e., feed barley or feed wheat) and winter cereals (i.e., winter wheat or fall rye). It will put some cash in your pocket while we wait for better prices in oilseeds and milling wheat (Get your wheat tested! Know your grain!)

Lentils got a bigger boost, with the new estimate now at 2.44 million tonnes. In August, it was 2.29 million tonnes. On the pulses, peas production out of Canada was pegged at 3.86 million tonnes, only slightly higher from the 3.79 million tonnes previously estimate. The prices for peas are likely to trade sideways as ample global supplies curtail any “panic buying.” The main cause of the supply is increased production in the Black Sea, as well as 2 years of good monsoon rains in India.

Considering where EU wheat prices are right now, more rapeseed is expected to get planted in 2018. The key contracts that the market is watching are the Paris-based November 2018 rapeseed price and wheat’s December 2018. The average ratio between these two “end-of-the-calendar-year” contracts Is usually 1.9, but today it sits above 2, suggesting more rapeseed in 2018. It’s also worth noting that the last couple of years, farmers have been unable to use certain seed and chemical treatments on their rapeseed crops. One would think this is a detriment to planting more acres. However, alternative insect management strategies are being employed, and it appears to be bringing the confidence back in to successfully grow a profitable rapeseed crop in Europe.